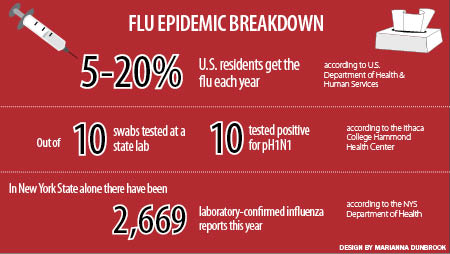 The Hammond Health Center confirmed an outbreak of pH1N1, commonly referred to as swine flu, on the Ithaca College campus Feb. 3.

Since Jan. 27, the Health Center has treated more than 91 students or staff members with influenza-like symptoms, according to Vivian Lorenzo, physician and assistant director at the Health Center. As of Feb. 3, 82 patients were given rapid tests, where saliva swabs are taken as a preliminary check for the influenza virus. Of those tested, 38 samples were positive for the influenza A virus, of which pH1N1 is a strain, Lorenzo said.

“Testing assists us to determine what strain is circulating and the effectiveness of the vaccine,” she said.

Rapid tests are given only on a case-by-case basis, according to the doctor’s medical judgement, Lorenzo said, and not everyone with symptoms is tested.

The Health Center sent an email to students and staff Jan. 29, notifying them of a surge in influenza cases since Jan. 27. Lorenzo said 95 percent of the influenza A circulating this year is the pH1N1 strain.

“It’s essentially the same strain that started circulating in 2009, but has been circulating ever since,” Lorenzo said.

The pH1N1 strain was first discovered in the United States in April 2009, according to The Centers for Disease Control and Prevention. While most people who have caught pH1N1 experienced typical flu-related symptoms, the virus has become more severe in some cases and led to pneumonia and even death. The CDC estimates that more than 8,800 died because of pH1N1 between April 2009 and April 2010. Sigrid Connors, director of patient services at the Tompkins County Health Department, said the severity of the outbreak can be explained by the time of year and lack of suitable vaccines.

“It hit the young adult population much harder,” Connors said. “And we saw a higher number of fatalities.”

Because similar viruses circulated during the mid-1900s, many older adults have antibodies and are better protected against the pH1N1 virus than younger people who have not been exposed to similar flu strains before. Since 2009, the pH1N1 strain has been included in all flu shots. Doctors now have a better handle on what to expect from the virus, Lorenzo said.

People with respiratory issues can be affected more strongly by influenza because it is a respiratory illness. The Health Center warns that people with asthma, heart disease, diabetes, sickle cell disease or immunosuppression should contact a doctor if they begin to feel sick.

“Anyone with underlying conditions who has flu-like symptoms should be coming in to be seen,” Lorenzo said.

Sophomore Taylor Smith, who suffers from asthma, said she began to feel drowsy Jan. 29, but nausea kept her awake for most of the night.

“I was extremely tired and sort of nauseous at dinner, but when I went to bed I couldn’t sleep,” Smith said. “I woke up every hour until 2 a.m. when I knew I was going to vomit. And then I was up four more times to vomit.”

Smith said her roommate drove her to the Health Center the next morning.

“They had me wear a mask, and they asked for all of my symptoms,” Smith said. “Then they diagnosed me with the flu.”

The timing and duration of the flu season varies, according to the CDC, but it typically peaks in January. There is no accurate count of the number of influenza cases in Tompkins County, Connors said.

Flu symptoms often include abrupt fever, body aches, sore throat, coughing, headaches or decreased appetite. If a student contracts the influenza virus, the Health Center recommends staying out of class or work until the fever has been gone for at least 24 hours.

Smith said she got her flu shot this year. Though vaccines do not prevent influenza in all cases, Connors highly recommends getting vaccinated. Flu vaccines are free to students who go to the Health Center. The Department of Human Resources at the college covers faculty and staff vaccinations too, Lorenzo said. After the Health Center sent out an email alert about the influenza outbreak Jan. 30, Lorenzo said, it ran out of vaccines on campus for part of the afternoon.

“Demand exceeded the supply that we had, but by that afternoon we got more in,” Lorenzo said. “At this time, we have a good supply of flu vaccines.”

Though the Health Center did not provide the specific number of vaccines available, Lorenzo said the office would continue to monitor the demand and provide accordingly.