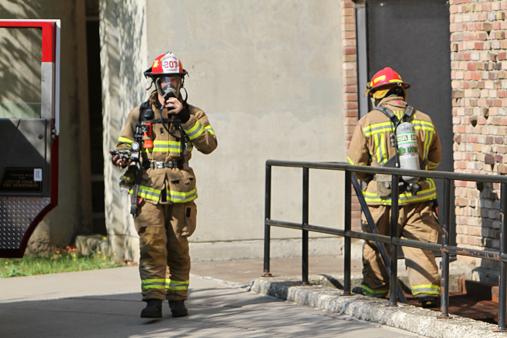 Update: The Hill Center re-opened at 12:15 p.m. after being closed due to a broken belt in the building’s ventilation system. Classes will resume at 1 p.m.

The carbon monoxide alarm in the building was set off. The Ithaca College Emergency Notification System alerted students at approximately 10:08 a.m. that the Hill Center had been closed as of 9:30 a.m. Public Safety officers and the Town of Ithaca fire department were dispatched to the scene.

All class and activities in the Hill Center are canceled until further notice.

The building is being ventilated now, and classes should resume by this afternoon. The cause of the alarm is still unknown. No one has been reported injured.

“An alarm went in dispatch saying that it was detecting a gas odor,” David Dray, deputy chief of Public Safety, said. “[We] emptied the building, and we are going through still trying to make sure no one is in the building, then we are going to be ventilating it and hopefully have classes back in session around 11:30 a.m. or noon.”

Sophomore Elaine Grey usually has class in the Hill Center, but her class was outside today.

“The teacher came out and brought us all out by the fountains, so we were here for 10 minutes and everyone got the text message notification that all classes in Hill were canceled until further notice,” she said. “So we had a small discussion, and she let us go after 15 or 20 minutes.”

Donna Mosher, sports information assistant, was in the building when the alarm went off.

“We thought it was just a normal fire alarm test, and then we were told we couldn’t go back in because of carbon monoxide,” she said.

Check back later for more updates.