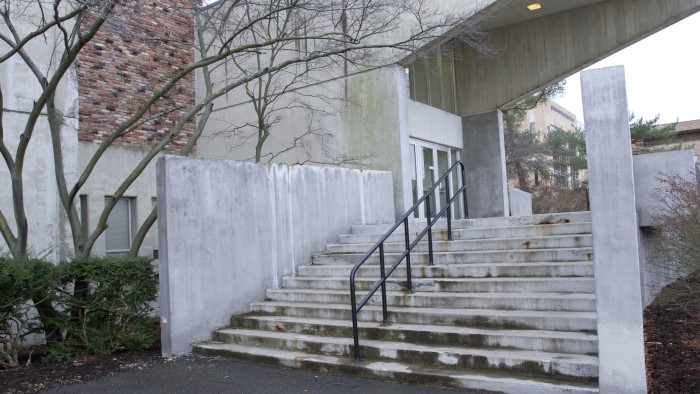 Emily Fedor/The Ithacan
The Hill Center’s $15 million renovations include replacing the indoor pool space with a two-level area of classrooms and athletic training facilities. The gym floor and bleachers will also be renovated.
By Nicole Ogrysko — Senior Writer
Published: December 13, 2012

The project will convert the old indoor pool space into a two-level area with classrooms and athletic training facilities, and it will replace the floor and the bleachers in the gymnasium. The project is expected to cost more than $15 million, Rick Couture, associate vice president of the office of facilities, said.

Couture said after the construction of the School of Business building, Peggy Ryan Williams Center and Athletics and Events Center, the college planned to focus on the Hill Center, which was built in the late 1960s.

“Now that we’ve done the new construction, we’re trying to take a look at existing buildings that need renovation work,” he said. “The Hill Center was pretty much at the top of the list.”

Couture said the college hopes to finish all phases of the project by December 2013.

The bulk of the renovations will come when construction crews demolish the indoor pool, a process which Couture said could take four to six weeks. Building the new classrooms and lab spaces is expected to take at least two to three months.

Michael Matheny, clinical associate professor of exercise and sport sciences, said the construction on the athletic training clinic itself isn’t expected to begin until the end of May.

“We’re supposed to be able to move into our new space at the beginning of August, and that couldn’t have worked out for us better because we don’t really have a presence around here over the summer,” Matheny said.

Paul Geisler, director of the athletic training education program at the college, said the upgrades will give students, faculty and athletes more space in the rehab clinics and labs.

“We’re dramatically overdue for an upgrade in our facilities for our classrooms and our major athletic training clinic,” Geisler said. “The one existing now in Hill Center is very small and very cramped. As it compares to our competitors, other programs, other schools and their clinical facilities and even own facilities with physical therapy and occupational therapy, the athletic training program has been behind for a long time.”

Matheny said the renovations will also move athletic training education program offices closer together. Though the A&E Center has given athletic trainers more space for their clinics, he said the improvements in the Hill Center will fill some of the gaps the clinic now finds in its program.

“The space we have is still small, and it’s not a very good space from a clinical education standpoint,” Matheny said. “We have some treatment areas, but we don’t have any functional rehabilitation space to do the type of functional rehab that we need to do with our athletes.”

Geisler said the construction should have little impact on students, as the athletic training clinic will still remain fully functional.

“The construction shouldn’t affect the students too much,” he said. “It will be more of an inconvenience for the faculty, if anything, because their offices are going to be noisy and dirty.”

In addition to main projects in the gym and pool area, Couture said the college will work on the building’s heating and air conditioning systems and the locker rooms and bathrooms in the Hill Center.

With construction on the gym set for the summer, Couture said the space is expected to be ready for classes in the fall. If some classroom renovations are not finished, he said the college plans to work with the registrar’s office to move the classes that are usually held in the Hill Center to different locations across campus.

With a project this large, Couture said, the biggest challenge is finding ways to avoid disruptions.

“It’s going to be a bit of a challenge, so we’re going to have to work with the folks who occupy the Hill Center and try to make the project as least impactful as possible,” Couture said. “All I ask is people understand that there’s going to be some inconvenience, but we’ll try to minimize that as much as we can.”