Hiring outlook for Class of 2016 is more favorable than 2015 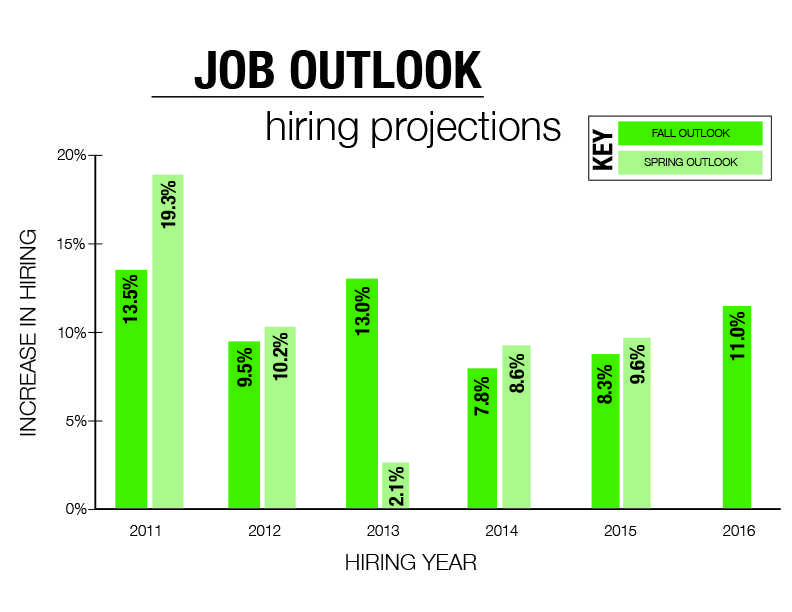 Design by Hayley Tarleton
The “Job Outlook Survey” released by the National Association of Colleges and Employers estimated an 11-percent increase in hiring of college graduates.
By Daniel Hart — Staff Writer
Published: December 8, 2015

The “Job Outlook Survey,” released Oct. 22 by the National Association of Colleges and Employers, estimated an 11-percent increase in hiring of college graduates. The survey has predicted an increase every year for the past six years.

In recent years, the survey has consistently shown a steady increase in jobs. The job outreach data for the college reflects this national upward trend. John Bradac director of the Office of Career Services, said E-recruiting is how most employers hire graduates, but job fairs and recruiting also help many students land jobs before they graduate.

Sixty percent of the Class of 2014 was employed within nine months after graduation, while 23 percent went to graduate or professional school, and five percent participated in additional education, such as internships, according to the college’s Office of Institutional Research. Bradac said these numbers meet or exceed the national averages.

Eloise Greene, the professional development coordinator for the Roy H. Park School of Communications, assists students in the job-searching process. Since the economic recession, Greene has seen an increase in post-graduation temporary jobs and internships, which often turn into long-term positions.

“What was formerly an internship for an undergrad, which was unpaid, now is a temporary job at a low pay for a graduate,” Greene said. “In essence, our undergrads are competing with our grads for an entry-level job.”

Bradac said employers are also aggressively seeking students in the winter, and students graduating in December will find less competition.

“There are less graduates out there moving and trying to find opportunities. It’s often a great time to find and make connections,” he said.

Dawn Kline, the assistant dean for the School of Business, said although there are generally fewer job opportunities for December graduates, less competition makes their chances of success about equal with May graduates’.

“We don’t have a huge number of students who graduate early,” Kline said. “Really big companies are recruiting to bring in a large cohort of students into a training program in the summer, but smaller companies — things like marketing, management, a lot of those businesses — are kind of hiring on an as-needed basis. So I don’t think it’s a drastically different prospect one or the other.”

Senior Shai Ben-Dor, a television-radio and media production major, will be graduating in December. He has an unpaid internship set up for after graduation, with ambition to land a job soon after.

“I applied to 30-plus companies because if everybody says yes, that’s great,” Ben-Dor said. “Then it’s up to you to make the decision of which one you’re going to choose. If you want something specific, really push yourself and make yourself a presence with that one company.”

Kline said the school strives to help students with the skills to build professional relationships — skills that she said have become increasingly important, as many jobs are not posted and are only filled through knowing someone.

“There’s the traditional resume development and cover letter help, how–to–apply–to–a–job side of things, and that’s really important,” Kline said. “But the statistics are getting higher and higher of the number of jobs that don’t actually get posted anywhere.”

Beginning this year, the college started using ICHired, a tool powered by the company Handshake, for students to find job listings. Throughout all of the last school year, the college provided 2,859 positions through eRecruiting. Since ICHired has been implemented, 2,100 opportunities have been made available to students, Bradac said.

Bradac said the college maintains relationships with over 6,000 employers.

Senior Amanda Lee, a business administration major with concentrations in management and marketing, already has a job lined up for after she graduates as an operations team leader for Amazon. She said she got the opportunity when Amazon came to campus specifically to recruit for the position, and her experience as a peer career adviser at the college helped with the job-searching process.

“Just keeping an ear out for things I think is pretty helpful,” she said. “I don’t have to worry about it for the end of the year. I would say that looking for an internship was probably more stressful.”

Bradac said it is never too early for students to start their job search.

“Employers are looking intentionally for graduates who graduate this spring, now,” Bradac said. “I strongly encourage students to be actively involved in their job search. For those who are seniors, it is not too early to start. The important part of your job search is knowing what you want, knowing who you are, and going out and making it happen.”