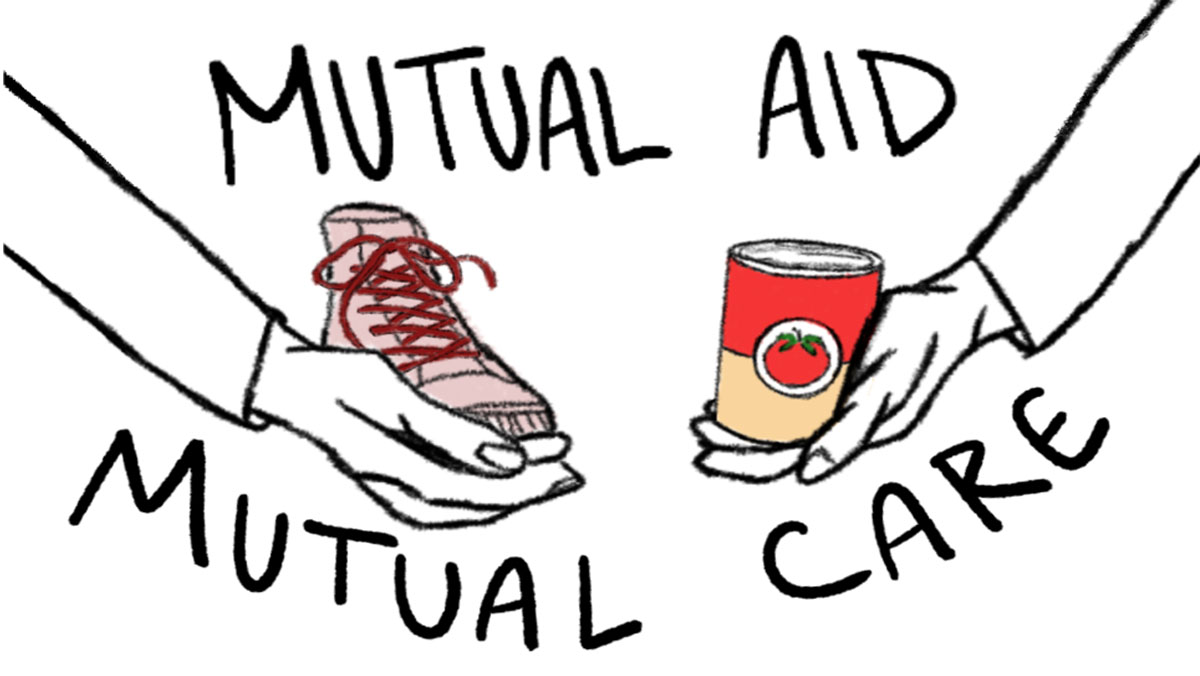 “The only reason I’m here is because there are LGBTQ ancestors who I had never met who came way before me, who figured out how to do mutual aid so that we could literally exist,” Luca Maurer said.

Mutual aid can take many forms, but the general idea is to address the needs — material and emotional — that people have outside of existing structures controlled by the state through grassroots organizing or by simple acts of solidarity to a neighbor, according to Mutual Aid Tompkins. Maurer also said he was in college during the height of the HIV/AIDS crisis and witnessed how the LGBTQ+ community practiced mutual aid to survive.

Maurer said people turn to mutual aid for many reasons, including lack of access to existing government and nonprofit structures, like when the structures are not providing what the community needs and when people are decentered within the structures by others with dominant identities like heterosexuality and whitness.

“Even informally, I’m thinking about the history of potlucks in LGBTQ communities,” Maurer said. “And there’s a reason for that. I mean, it’s because we’re wonderful and who wouldn’t want to have a potluck with us, but it’s also because I was in that position where I was like, ‘I only have this; this is what I have to eat.’ And if I invite folks I know they bring what they have to eat, and it’s that act of taking care of each other, sharing food, sharing community [and] coming together.”

Student-led LGBTQ+ groups on campus like PRISM work to make campus a safe space for students through community building, discussions and educational programming. Senior Meabh Cadigan, president of PRISM, said she wants to make students more aware of the resources available to them because of how valuable they can be.

“The LGBT Center recently opened our trans student clothing swap which … might be really helpful,” Cadigan said. “I know I have benefited from things like that because being trans and having to replace an entire closet is a difficult and expensive thing to do. So, having been able to rely on each other to supplement those things is really helpful.”

Cadigan also said she wants to create a more structured framework of mutual aid for the campus LGBTQ+ community. However, she said that since the start of the COVID-19 pandemic, campus community building and student engagement has been harder to organize.

“A conversation we’ve been having for both PRISM and other [organizations is] … the way that student engagement operates has certainly shifted, and trying to get people to come together and organize is much more difficult than it once was,” Cadigan said.

Other student organizations are struggling to get the wider campus community to support their mutual aid efforts. Ujima: Black Student Union (BSU) held a toiletry drive from Nov. 4 to 18 to collect products asked for by the Women’s Opportunity Center of Tompkins and Onondaga Counties.

Junior Angela Russell, social media and community engagement coordinator for the BSU, said she came up with the idea to host the drive because members of the BSU wanted to engage more in mutual aid. The group also led a discussion at its general body meeting Nov. 7 about the importance of Black femme mutual aid.

“We [BSU] actively try to engage in the [local] community and this level of mutual aid, donating toiletries is important, because we want to bring the campus community to help us in doing that rather than us just doing it by ourselves,” Russell said.

Russell said that despite advertising the drive as a “campus–wide toiletry drive,” the only donations came from other Black student organizations.

“We haven’t had a lot of success,” Russell said. “We haven’t seen any engagement from the rest of the campus community at all. … I feel like it’s because people inherently think that if it has anything to do with a Black student org, it’s only for Black people to participate [in], but mutual aid is for everybody. It has to go to people who actually need it. … What we’re really asking is that people show up and give more donations.”

Phoebe Brown, a founder of Mutual Aid Tompkins (MAT), said she witnessed a large increase in community organizing during the height of the COVID-19 pandemic, but now donations to MAT have decreased significantly. She said she attributes the shift in engagement to a collective response to crisis, which diluted as people started being able to return to their typical routines.

“We were able to really help people … and now that the pandemic has slowed down, so has the donations,” Brown said. “What I noticed that happened with this is that at that peak [of the COVID-19 pandemic], people were willing to help and be there for others because they also felt what it felt like to lose privilege.”

When participating in mutual aid, Russell said a vital aspect is building relationships and communication. She said that when organizing the drive, the BSU asked the Women’s Opportunity Center what folks needed rather than making up a list of items they assumed would be helpful.

“You don’t just go about giving because you think it’s a necessary item to give someone; you communicate and ask them what they want before you even do it,” Russell said. “… It can’t just be like, ‘I think because I have more money, I can tell you what I should give you.’ You have to ask, and I’m reiterating that over and over because it just doesn’t happen.”

Russell said that in Spring 2023, the BSU is planning to have a “town hall” where students of color can voice what they need from the campus community. She said student organizers want to hold that space so they can focus their efforts in fulfilling those specific needs.

“Historically [mutual aid] has been a thing and communities of color, or just like, honestly, any minority community. … People just give what they can give, and it’s always been a thing,” Russell said.