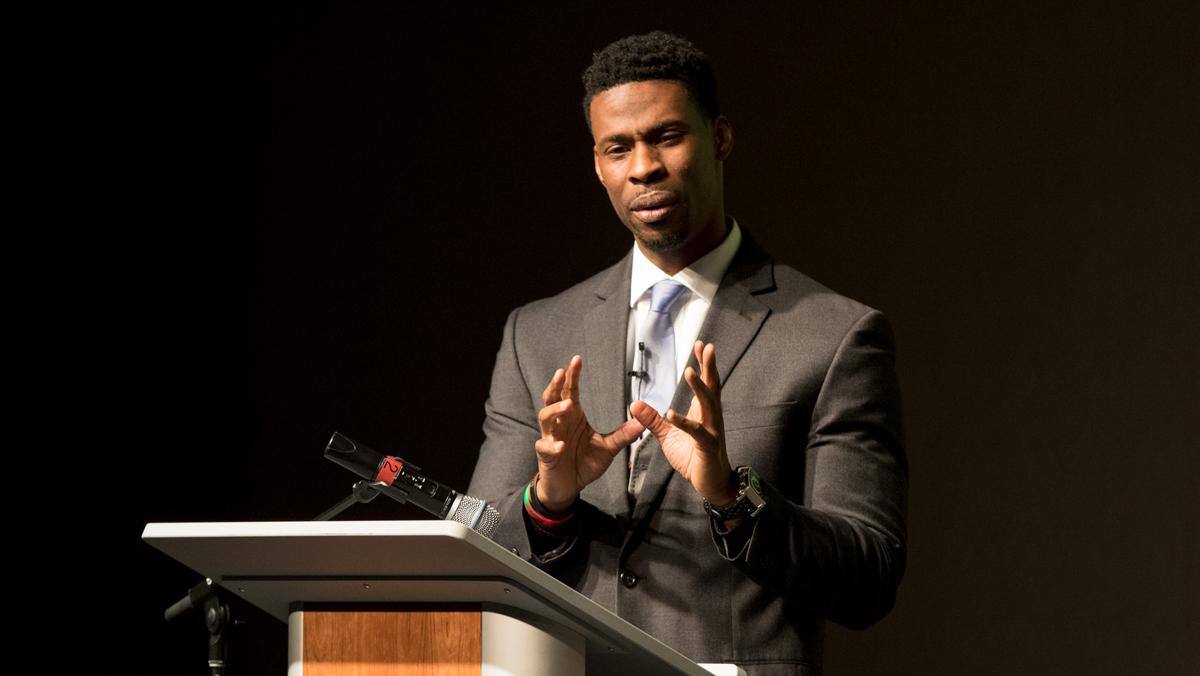 Peterson shared his experience of spending a decade of his life in prison for a robbery he and his friends committed in 1999. The crime resulted in four people being shot and left two dead. Peterson explained that he “woke up” at the age of 22 while being transferred from one prison to another and recognized another prisoner as a peer from high school. Peterson realized his purpose in life was to advocate for criminal justice reform and immigrants’ rights.

“That’s when my awakening came, that’s when I began to ask questions, the difficult questions, not of me, but of America,” Peterson said.

Peterson proceeded to talk about how many people are flawed, including Dr. King, and how these people need to be part of the conversation regarding justice and equality. Peterson read part of President Collado’s statement in response to the sexual abuse allegations against her  and commended Collado for her sentiment about accepting everyone for their full humanity without looking at their labels or diagnoses.

Davi Mozie, an audience member who has worked for non-profits in the Ithaca community for years and currently works at Cornell Cooperative Extension, felt passionate about Peterson’s remarks on being flawed.

“I started to think about in all that we do, and all that is happening now, and what Dr. King would think now. It all goes back to that we are all flawed and this country is flawed immensely,” Mozie said.

Much of Peterson’s speech was focused on the current political climate in the United States regarding the Deferred Action for Childhood Arrivals. During the Trump administration, the right for immigrants to live in the United States has been threatened with changes to immigration policies and DACA status, Peterson said.

Peterson said that two of his mentors and friends were recently arrested for being undocumented immigrants in America. These are the same two men who helped encourage and guide Peterson after he was released from prison through the non-profit organization Families for Freedom. The organization is a multi-ethnic human rights organization that works to help families in the New York area who are facing and fighting deportation.

Peterson worked with Families for Freedom after he was released from prison. He helped run the youth committee and eventually became the board chair after encouragement from his two immigrant friends.

Peterson then said it is important for minorities who are being singled out by the government, the police or other institutions to begin to question society and work to make changes.

“Be radical and reasonable in the face of opposition. Be sustainably awakened. Be complicated,” Peterson said. “Be so revolutionary that Dr. King would learn from you. Be so visionary that future generations will honor you with your flaws and imperfections included.”

The presentation was followed by a Q&A portion where audience members asked about the current political climate in the country regarding sexual abuse allegations and the #MeToo movement.

Freshman Hana Cho asked Peterson, “How do you think we can find a balance between praising revolutionary leaders and also acknowledging their faults?”

Peterson responded, as he does at the beginning of all his speeches, by acknowledging the crimes he has committed. He said it is extremely important for other leaders to acknowledge their past crimes as well.

“Are these people sincerely acknowledging the wrong that they’ve committed?” Peterson said. “Are they trying to reduce it as just something that happened back in the day? Are they trying to place some blame on the person that was harmed?”

Peterson continued his answer by posing the question of what Dr. King would think and do if he were still alive today regarding the #MeToo movement.

Sophomore Melanie Sadoff was moved by Peterson’s speech and was amazed by the command he brought to the stage.

“I love how he talked about the difference between waiting for perfection and being active now and embracing your flaws,” Sadoff said. “You don’t have any excuse to wait.”

Freshman Annisa Phillip said she realized she needed to take the initiative to start participating in grassroots activism work instead of assuming other people will do something to make a difference.

“It’s time for me to start being the change, rather than just watching it happen,” Phillip said.

A group of nearly 20 students, faculty and community members met Monday to discuss how Ithaca College should commemorate Martin Luther King Day next year. The group generated a list of ideas for the celebration, including ways to encourage participation; social, cultural and intellectual activities; and a day of community service. Deb Mohlenhoff, coordinator of…