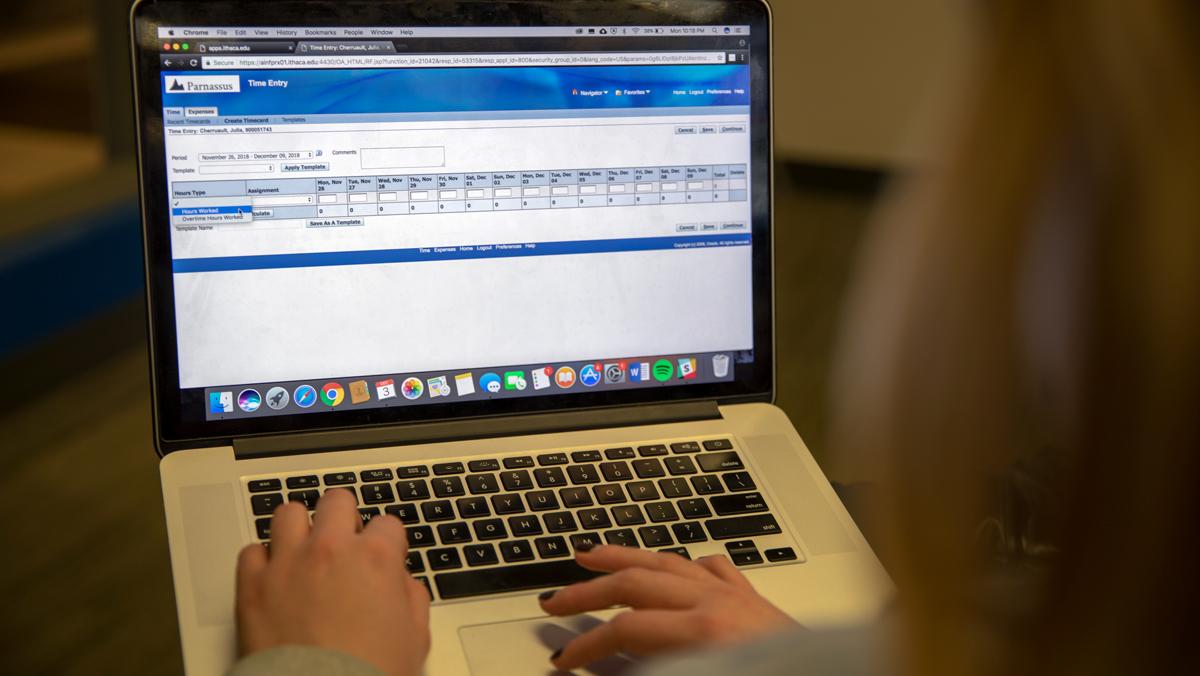 Ithaca College began a temporary freeze on data entries into Parnassus on March 6 to transition its human resources management software from Parnassus to IC HR Cloud.

The “freeze” will temporarily prevent data entries into Parnassus, the college’s human resources management software for hiring and payroll, but will not affect financial transactions as long as time cards were filed before the freeze. It is expected to last somewhere between four to six days. Employers and employees will not be able to enter information into Parnassus during that time. This is phase one of a two-phase software transition.

By the end of the transition, the college will no longer be using Parnassus and will instead use IC HR Cloud. Similar to Parnassus, IC HR Cloud will still be powered by Oracle, but it will have a slightly different user interface and its data will be stored in the cloud instead of on-campus servers. After phase one is rolled out, some of the data entries on Parnassus will go to the IC HR Cloud system and some will continue going to the traditional Parnassus system.

Kirra Franzese, associate vice president of engagement and talent management in the Office of Human Resources, said the freeze is needed in order for the college to make the transition from Oracle E-Business Suite, a service it calls Parnassus, to Oracle Human Capital Management Cloud (HCM), which it will call IC HR Cloud.

David Weil, associate vice president in the Department of Information Technology, said the IC HR Cloud will have the same basic features as Parnassus and that the experience will be very similar, but that the program will be more mobile-friendly.

“The core functions of hiring employees, managing their benefits and paying them is similar,” he said. “But there is a lot more enhancements that HCM will be offering — things like managing employee interests or achievements.”

Franzese said some of the changes will also include the ability for employees to update certain personal information that they could not update before, such as their education. She also said performance reviews will get a significantly more robust user-interface.

Franzese said the Parnassus system is currently run through the college’s server, and this requires the college to do a lot of maintenance and upkeep with the system. Moving to IC HR Cloud, which uses off-campus servers, will reduce the maintenance the college is responsible for.

“It allows Oracle to send updates to their servers and that can update servers for thousands of customers that they may have instead of putting the onus on the individual organizations to maintain that and to do the updates on site,” Franzese said.

She said the freeze is needed to ensure that all the information in Parnassus gets uploaded into IC HR Cloud. If there was no freeze and employers and employees on campus entered information into Parnassus during the transition, it would make it difficult for human resources to ensure that all the information has been successfully moved over to the new Oracle cloud service. Oracle is the company that provides the human resources management cloud service.

“If we’re continually adding things into the system after March 6, then it’s impossible to track what might be getting broken in between the transition,” she said.

Franzese said that after backing up all the data and transferring it over to the cloud, there will be analysis to ensure that all of the data transferred over properly, and this is part of the reason the process will take a couple of days.

“There is so much to IC HR Cloud,” Franzese said. “We are hoping to roll out modules on goals, on career development and more, so there’s a lot more that we can utilize, and we are really excited about the possibilities it brings.”

In its Intercom release, the Office of Human Resources dubbed the current set of changes as phase one. Franzese said there will be two major phases in this transition — the one taking place March 6 and another transition taking place July 1 — and a few minor changes that will take place over time as the system gets fully implemented.

Maura Fetsko, associate director of total rewards and workforce strategy in the Office of Human Resources, said phase one will focus primarily on transferring personal information over to the cloud.

“We call it the core that is going live in phase one,” she said. “That is making sure that we have all of the positions in the system and all of the individuals in those positions right, and it gives us an opportunity to thoroughly make sure that data is valid before we go live with something like payroll.”

Phase two will include the rest of the major features, such as management of payroll and finance.

Beth Reynolds, controller in the Department of Business and Finance, said in addition to the human resources information that is being transferred from Parnassus during the two phases, her staff will also move data over to the IC Finance Cloud starting in October 2019. She said some of her staff is also helping with human resources’ phase one transition.

“Members from my area, business and finance, will be involved in the implementation of both of these systems, both technically and functionally,” she said. “They are heavily involved in the set-ups, data conversion, integration and testing for the new IC HR Cloud system. They are also involved in documentation and report writing.”

Franzese said human resources has reached out to employers on campus to help them prepare for the transition.

Office of Human Resources to use new software program