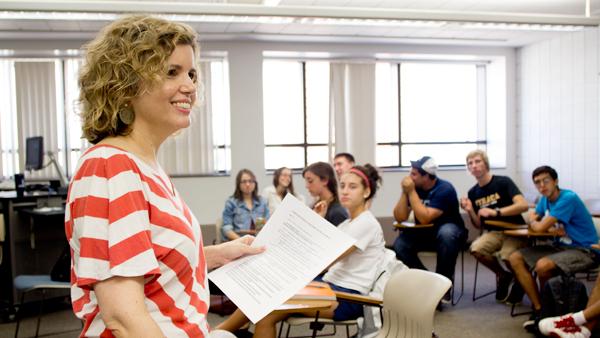 Kicking off the new academic year, Ithaca College faculty, staff and administrators continue to work behind the scenes to gradually implement the 15 different initiatives of IC 20/20, a 10-year vision plan for overhauling the college’s current curricular and structural system.

According to Marisa Kelly, provost and vice president for educational affairs, there are six key components of IC 20/20 the college is focusing on this year. Some of these include continued development of the Integrated Core Curriculum, launching the Center for Student Advising and Achievement, and fostering the plan’s diversity initiative.

In response to the push for a college-wide general education system by the college’s accreditation organization, Middle States Commision on Higher Education, the college has been working to overhaul the current curriculum across the five individual schools.

One of IC 20/20’s overarching themes is to establish an integrative, cross-college curriculum. This includes integrating majors to foster a well-rounded student experience. As a result, the Integrative Core Curriculum initiative of the IC 20/20 plan was formed during the 2011-12 academic year. This fall semester has been dedicated to finalizing the ICC so it can be fully implemented by Fall 2013.

Danette Johnson, director of the ICC, said the college has nearly doubled the number of first-year Ithaca Seminars it offers in the fall, now offering 82 different classes. Beginning this academic year, all first-year students from the Roy H. Park School of Communications, the School of Humanities and Sciences and the School of Health Sciences and Human Performance are required to enroll in one of the new seminars.

The ICC initiative is also centered around the idea of building a student’s curricular experience around one of six central themes: Mind, Body and Spirit; Identities; Inquiry, Imagination and Innovation; The Quest for a Sustainable Future; A World of Systems; and Power and Justice. Many of the new seminars offered this semester are based on one of these themes, such as “Animal Instincts: Animal Nature and the Human World,” “Environmental Politics Through Film” and “Social Media and You.”

The new seminars being offered this semester will provide a launching pad from which the college can implement the six curricular themes in Fall 2013, Johnson said. By monitoring the level of student interest in each of the seminars, the ICC committee will be able to determine which themes will be kept and which will be discarded for the 2013-14 year.

Freshman Matthew Clum, who is currently taking one of the new seminars, “Alcohol, Tobacco and Firearms” taught by Kimberly Baker, an assistant professor in the sociology department, said he’s enjoying learning about important issues debated around the country.

“I really like it so far,” he said. “It seems like something that we as citizens of the United States should have an opinion on; they’re really important topics. The class helps you realize your own opinion and teaches you the opinions of others.”

Clum said many of his friends, however, aren’t as enthusiastic about their respective freshman seminars.

“A lot of my friends aren’t too happy about the amount of writing they have to do for their seminars,” he said. “But hey, that’s college.”

Kelly said the business plan for IC 20/20 calls for seven new faculty positions to support the effort that includes the ICC as well as integrative majors and integrative electives. Kelly said the college is conducting three faculty searches this year that will be tenure-track positions in support of the ICC. These three searches are for faculty lines in the Park School, School of Business and the School of Music.

This semester, Johnson said, the ICC committee is focusing primarily on getting ICC courses approved for the Spring 2013 registration period. Along with that, they are focusing on finding a vendor for the new learning portfolio software that all students will be required to complete digitally. The portfolios will be based on classes they’ve taken and organizations they’ve been involved in. The creation of learning portfolios is part of the ICC initiative, where students will be able to display what they’ve learned from classes, campus involvement, organizations and throughout their entire college experience. Johnson said the college hopes to pilot the software in the spring.

“We’re making some really good progress on moving things forward,” she said. “I’ve been really impressed with the kinds of proposals the faculty have been coming up with for courses. There are a lot of exciting courses coming through.”

One of the key initiatives of IC 20/20 has been to restructure the college’s current academic advising system in order to create a more centralized program in a physical center.

Margaret Arnold, special assistant to the provost, is overseeing the development of the future Center for Advising and Achievement. Arnold said she is in the process of pulling together a search committee to hire a director for the center by December. That way, she said, the spring semester can be dedicated to hiring professional advisers to begin working during the Fall 2013 semester.

In July, Rich Robbins, a consultant for the National Academic Advising Association, spent nearly three days with 40 different faculty and staff members on campus to evaluate what the college is looking for in the potential center.

“He met with various people here, and we concluded that what people have been saying for the past five years is exactly what needs to be done: centralized advising,” Arnold said. “We need a place where students can go and receive the help that they need, be it advising, tutoring services, or just general support.”

In the meantime, the college has also been doing little things in keeping with the plan’s initiatives in order to bolster student involvement in the process. In regard to IC 20/20’s diversity initiative, the recently-formed Library IC 20/20 team sent out a survey Friday to the college community asking what the library can do to enhance diversity on campus. Many of the questions were geared toward garnering a general understanding of the students’ concept of the college’s current diversity standing. Kelly also said the college is planning for a broader campus climate survey on diversity, which will be spearheaded this year by Mark Coldren, associate vice president of human resources.

Though the college is on track with meeting its goals for certain aspects of the plan, Kelly said there is still a lot of work that needs to be done — work that will most likely continue long after the essential goals have been met.

“We will never be done,” she said. “The entire plan will always be evolving and changing as we learn and progress, and learn about what’s working for staff and students and what’s not.”