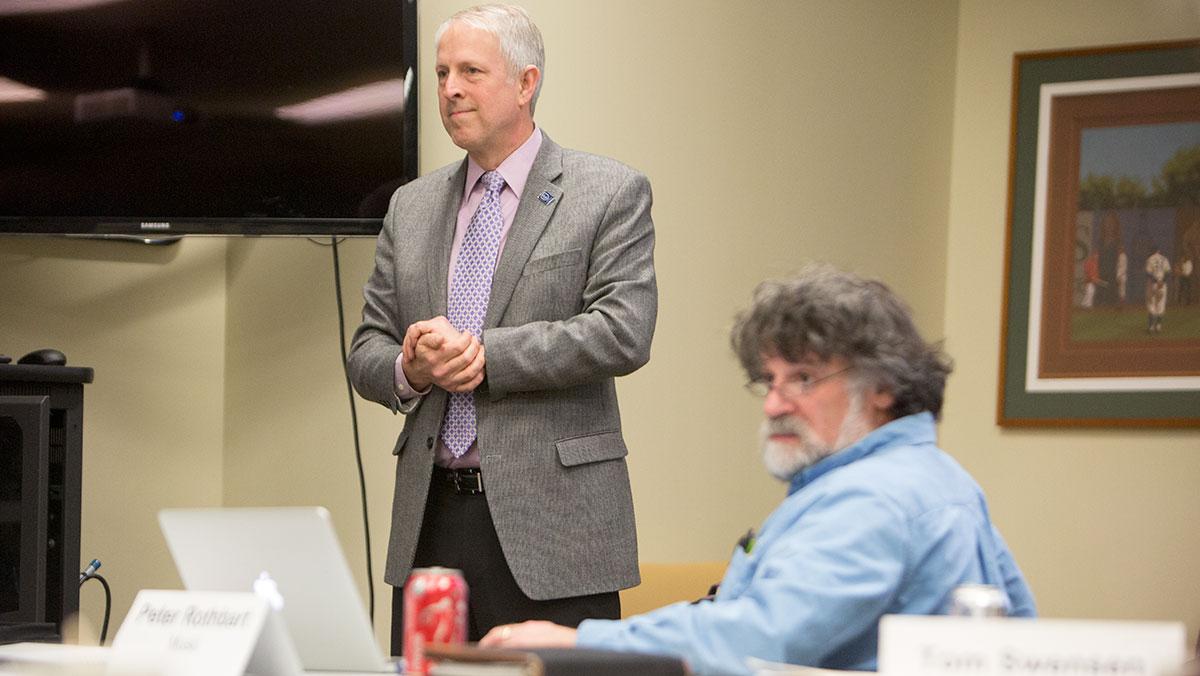 Christopher Biehn, vice president of institutional advancement, addressed the council with the idea of forming a 15- to 20-member faculty campaign committee with a purpose of encouraging more donation among faculty, alumni and other donors. He said creating this committee will help the college move forward with the IC 20/20 strategic plan, one component of which is to increase the IC Annual Fund and the college’s endowment.

Biehn said the college is seeking to raise the IC Annual Fund, a sum of alumni donations that mostly goes to educational programs and financial aid, to $2.5 million by 2020, nearly triple the amount it was in the 2012 fiscal year — $865,000. In addition, he said the college is hoping to double its endowment, which currently stands at approximately $268,214,127.

Biehn said he will be accepting nominations for faculty campaign committee members and a chair in the next several months. He said, ideally, a committee would be formed by the end of this semester before the official public launch of the capital campaign in October 2017.

Peter Rothbart, council chair and professor of music theory, history and composition, said he thinks the proposed campaign committee is too big.

“I think one of the concerns will be the faculty are committed and feeling stressed in service areas, so I think 15–20 [members] may be a bit of a stretch,” Rothbart said.

In response, Biehn said a committee of at least 10 core members would be satisfactory, adding that big-time donors tend to donate more when they see a high percentage of faculty being involved in college capital campaigns, especially if a large portion of the faculty population donates.

“Donors who are thinking about making gifts of five or 10 million dollars will ask us what percentage of the faculty have given to the campaign,” Biehn said. “So, even $25 or $10 donations [by the faculty] makes a big difference.”

David Prunty, executive director of auxiliary services, and Danette Johnson, vice provost for academic programs, also visited the meeting to discuss an initial draft of the copyright policy for course packs and other printed materials distributed to students.

Prunty said the Campus Copyright and Compliance Policy for Course Packs and Other Printed Materials would require every professor to disclose all course material needed at the time of registration so the student enrolled in that course can see how much the materials will cost. He said the initial draft also adds that course materials must be approved by the campus Bookstore before they can be distributed to the students as part of a course.

Several members of the faculty council said they were opposed to the draft of the policy, one of whom was Deborah Rifkin, associate professor of music theory, history and composition.

“The timeline just doesn’t seem realistic to me from a teacher’s point of view,” Rifkin said. “Getting a course pack ready in many months in advance — that isn’t how I can function.”

Duncan Duke Garcia, assistant professor of management, expressed similar concerns and said submitting all required course material for an upcoming semester before the current semester concludes will be a very tight deadline.

Members in the council who were actively questioning Prunty and Johnson said they were primarily concerned with course packs that professors make on their own. Because this involves taking excerpts from textbooks, the course packs will take a significant amount of time to create, unlike textbooks that can be added to a course without much difficulty.

The policy also has potential to affect students. Vivian Bruce Conger, associate professor in the Department of History, asked if the cost of purchasing the course packs for students will rise if this policy is implemented. Prunty said since the Bookstore would be involved in the production of course packs, the price will rise to accommodate the extra labor.

Prunty and Johnson said the policy is still in its beginning stages and far from being a completed draft, and they will return to the next council meeting with more information.