By Jasmine Scriven, Leila Marcillo-Gomez, Xiaoyi Zhang, Xinyi Qin
Xinyi Qin/The Ithacan
At the end of the Inauguration Ceremony, streamers and confetti were released to the crowds gathered in the Athletics and Events Center to celebrate Ithaca College’s 10th president, La Jerne Cornish, on Oct. 1.

President La Jerne Cornish officially became the 10th president of Ithaca College on Oct. 1 and was celebrated with an Inauguration Ceremony and a day full of events.

The day opened with an Inauguration Ceremony held at 10 a.m. at the Athletics and Events (A&E) Center that featured speakers from across the college, including students, staff and faculty, members of the Board of Trustees, Ithaca community members and alumni.

Notable guests included members of Cornish’s family, past presidents of the college like Peggy Ryan Williams and Tom Rochon, and presidents of local colleges and universities, like Martha Pollack, president of Cornell University.

The celebrations concluded with a showcase featuring performances from ensembles within the School of Music, Theatre, and Dance at 8 p.m, followed by fireworks outside of the A&E Center. 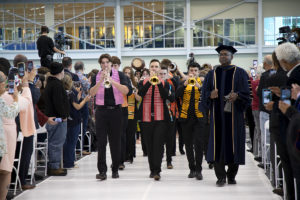 From left, first-year student Trevor Griffiths, Jared Wallis and Christopher Coletti, assistant professors in the Department of Music Performance, and Baruch Whitehead, assistant professor in the Department of Music Education, lead the IC Brass Choir through the aisle to the inauguration stage. The sound of trumpets and drums marked the opening of the Installation Ceremony. Xinyi Qin/The Ithacan 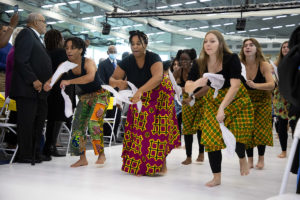 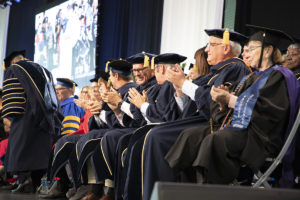 Ithaca College alumni sit on the inaugural stage in the Athletics and Events Center and give a round of applause at the end of a short video produced by the college’s television and digital media students. The video was a surprise for President La Jerne Cornish and featured her former and current colleagues talking about their impressions of Cornish. Xinyi Qin/The Ithacan 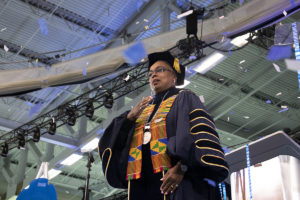 Newly inaugurated President La Jerne Cornish was moved to tears at the end of her inauguration ceremony as confetti and streamers were released from the ceiling of the Athletics and Events Center on Oct. 1, 2022. Xiaoyi Zhang/The Ithacan 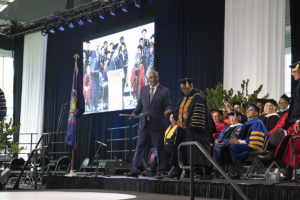 From left, David Terry, President La Jerne Cornish’s brother, and President Cornish meet at the center of the stage in the Athletics and Events Center for the presentation of the Medallion of Office to President Cornish. Xiaoyi Zhang/The Ithacan 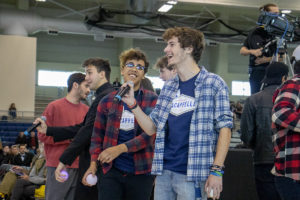 From left, Ithacappella members sophomore Jake Campbell, sophomore Joey Albano, junior James Williams and sophomore Will Sheehan perform in the middle of the Athletics and Events Center during the presidential Inauguration Ceremony on Oct. 1. For many attendees, the performance was a surprise flash mob. Xiaoyi Zhang/The Ithacan 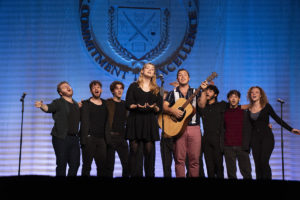 Ithaca College students perform “Musical Interlude” from “House of Desires” as part of the School of Music, Theatre, and Dance’s inaugural showcase on the evening of the presidential inauguration. The event celebrated the combining of the two schools through theatrical, orchestral and dance performances. Leila Marcillo-Gomez/The Ithacan 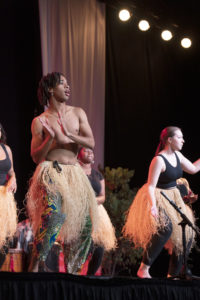 From left, junior Ty Benners and senior Kathryn Dauer perform at the School of Music, Theatre, and Dance showcase Oct. 1 at the Athletics and Events Center. The African Drumming and Dance Ensemble is directed by Baruch Whitehead, associate professor in the Department of Music Education. Leila Marcillo-Gomez/The Ithacan 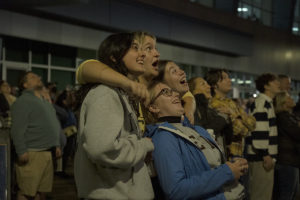 From left, sophomores Madelyn Salvante, Abbey Hall, Holly Geyer and Leah Mintz watch fireworks outside of the Athletics and Events Center. The fireworks concluded the presidential inauguration and the School of Music, Theatre, and Dance’s first annual showcase. Family members, students and staff were invited as part of Family Weekend. Leila Marcillo-Gomez/The Ithacan 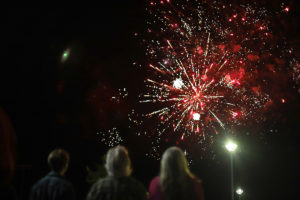 After the conclusion of the School of Music, Theatre, and Dance inaugural showcase, fireworks were released into the sky to celebrate the success of the inauguration and performances. Onlookers and guests of the showcase watched the colorful display of fireworks after a day of music, art and celebration. Jasmine Scriven/The Ithacan