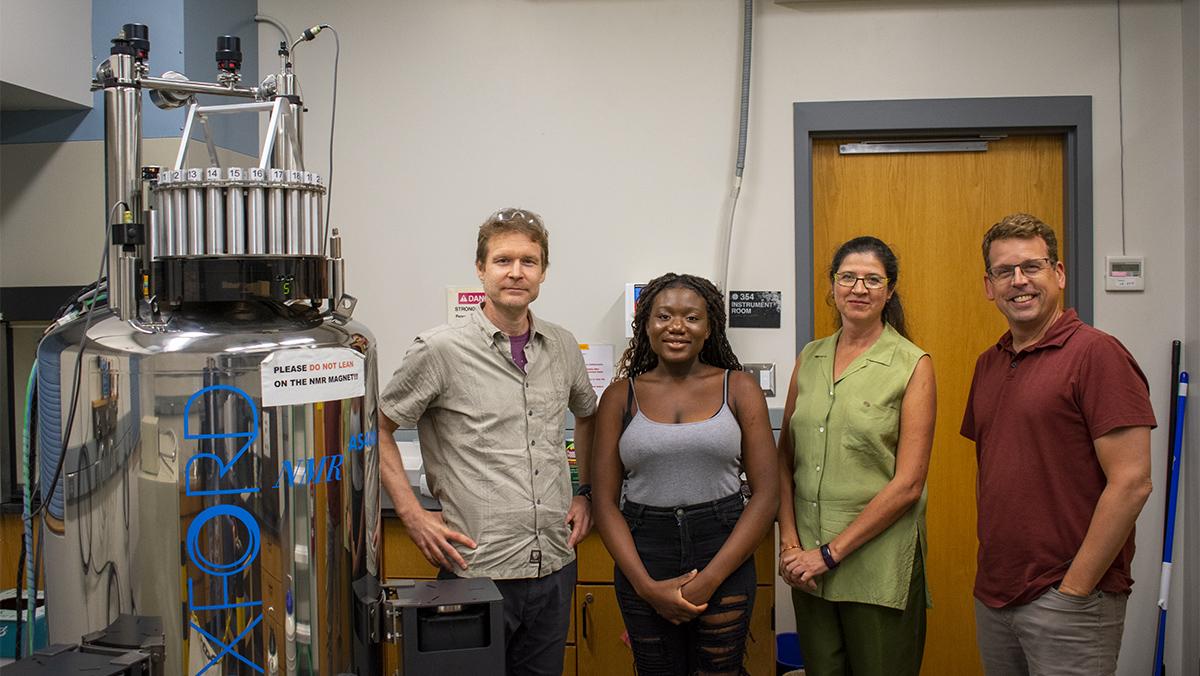 The Ithaca College Department of Chemistry was awarded a $250,000 grant that will be used to upgrade the department’s technology to aid in student and faculty research.

The grant was awarded by the National Science Foundation for the purpose of upgrading the college’s nuclear magnetic resonance (NMR) spectrometer. According to Science Direct, a NMR spectrometer is primarily used to find the molecular structure of a material and conduct experiments specifically on the nuclei of atoms. According to the college’s website, the chemistry department’s spectrometer was purchased in 2005.

Haaf said Ulrich was the lead writer of the grant and was responsible for highlighting issues with the current NMR spectrometer and the benefits of replacing it. Haaf and Larsen were responsible for contributing writing on their own research that used the NMR technology to the application, in addition to Ulrich’s.

Larsen said in an interview that the NMR spectrometer is used by professors and students in chemistry classes and research. Larsen said she uses the machinery to support her research into organometallic chemistry and catalysis, which she said are instrumental in the fields of pharmaceuticals, industrial processes and biomedical research.

Haaf said his research is generally in the area of organic chemistry and involves creating carbon-based compounds. Haaf said the NMR spectrometer is a critical piece of technology in his work and allows him to check compounds on a molecular level.

“[NMR] is probably, arguably, the most important tool that chemists have for learning about chemical structure,” Haaf said. “My research really relies on this because I do a lot of organic syntheses, and I couldn’t do it without it. I just couldn’t.”

Larsen said two main components of the instrument are a superconducting magnet and a computer to process and present the information found by the machine. Due to the upkeep and maintenance of the machine, Larsen said the magnet does not need to be replaced, however, the software — which was implemented in 2005 along with the machinery — is very outdated. While the machine is currently functional and being used by students, Larsen said it is running much more slowly than it should and the software issues create other problems, including the inability to save work and results externally.

Senior chemistry major Tenjing Sherpa works with Larsen on her research with the NMR spectrometer and said the out-of-date elements of the machinery can be obvious. Sherpa said he worked with NMR spectrometers outside of the college while doing research during summer 2022 and there were clear differences with the newer machinery, including options to operate more of the machine’s functions automatically, use new and different functions and run on faster software.

“It was cool to hear about [the grant], I got a little excited,” Sherpa said. “It’s gonna be good for the younger students especially, though; they’ll get to use something that’s a little bit newer and more updated.”

Sophomore Eirene Omoniyi, a biochemistry major, said she did research at the college during summer 2022 as part of the School of Humanities and Sciences’ Summer Scholars Program, including working in Haaf’s lab and attempting to synthesize a new plastic. Omoniyi said she used the spectrometer throughout the process to guide her research and she uses the machine weekly in her classes.

Omoniyi said that while the machine was helpful she did see issues with the NMR spectrometer. She said one thing that happened frequently was the machine not completing processes it should have done automatically.

“Especially in a space where everyone is trying to get to use the NMR, it can be quite frustrating,” Omoniyi said. “You might not get results as fast as you want them to, which can slow down other aspects of your project.”

Larsen said in applying for the grant, the application had to show the need for the machinery, including what research is being done with it and future plans with the technology. Larsen also said receiving the grant is an impressive thing for the college because the National Science Foundation supports undergraduate, graduate and doctorate programs from the same source of funding.

“It’s a huge effort and the probability of success is pretty low, but we have to try,” Larsen said “You don’t try, you’re definitely not going to get it.”

Haaf said he feels the grant application’s approval was caused by the strong undergraduate research program at the college, the quality of Ulrich’s writing and the fact that the college is not replacing the whole machine, but only particular elements, which will significantly reduce the cost.

Omoniyi said she is very excited about the NMR upgrade and how it will be implemented in her courses.

“That’s honestly so fantastic,” Omoniyi said. “It’s definitely gonna make life a lot easier around [the Center for Natural Sciences], which I basically live in. … It’s a great use of resources by the school.”