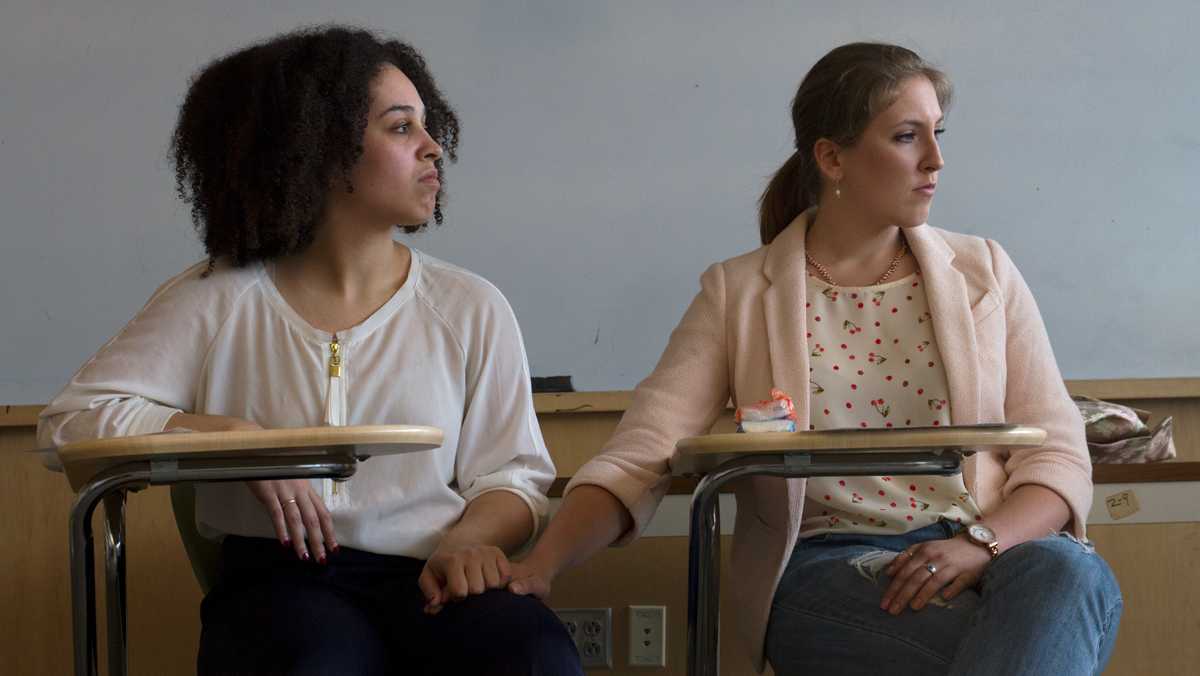 Andrew Treves/The Ithacan
Junior Vanessa Zimmerman and junior Annalise Haldeman speak about their experiences of homophobia in the Ithaca College Protestant Community at their event April 26.
By Maggie McAden — Staff Writer
Published: May 2, 2018

A petition with approximately 2,000 signatures from Ithaca College community members and others demands that change be made within the Ithaca College Protestant Community, and was delivered to President Shirley M. Collado May 2.

The petition is a part of a larger student campaign, IC Color, started by juniors Vanessa Zimmerman and Annalise Haldeman on March 10. The campaign aims to make the Protestant Community more inclusive for LGBTQ students and students of color after many came forward to detail prejudicial experiences other members of the community had in the PC. 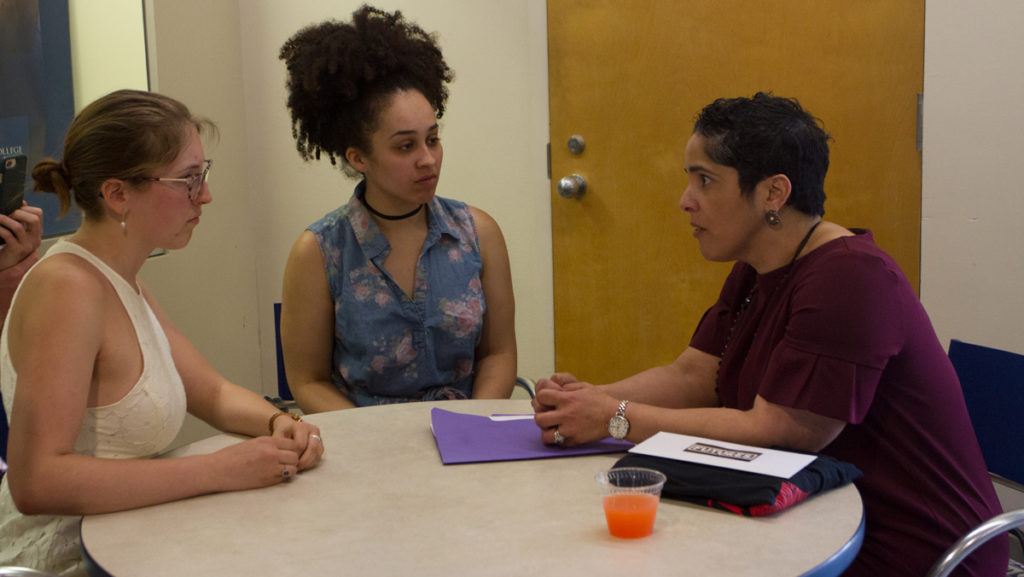 Collado said she is committed to creating an inclusive community. She also asked for them to trust the administration to make change.

“I hope you know my commitment to building a community that is strong for everyone, for all students from all walks of life,” she said. “I hear your concern.”

Rev. James Touchton, the Protestant chaplain at the college, said in a previous interview that he is trying to address these issues and find a way for those who do not feel included in the community to coexist with those who have a right to their religious beliefs that homosexuality is a sin. 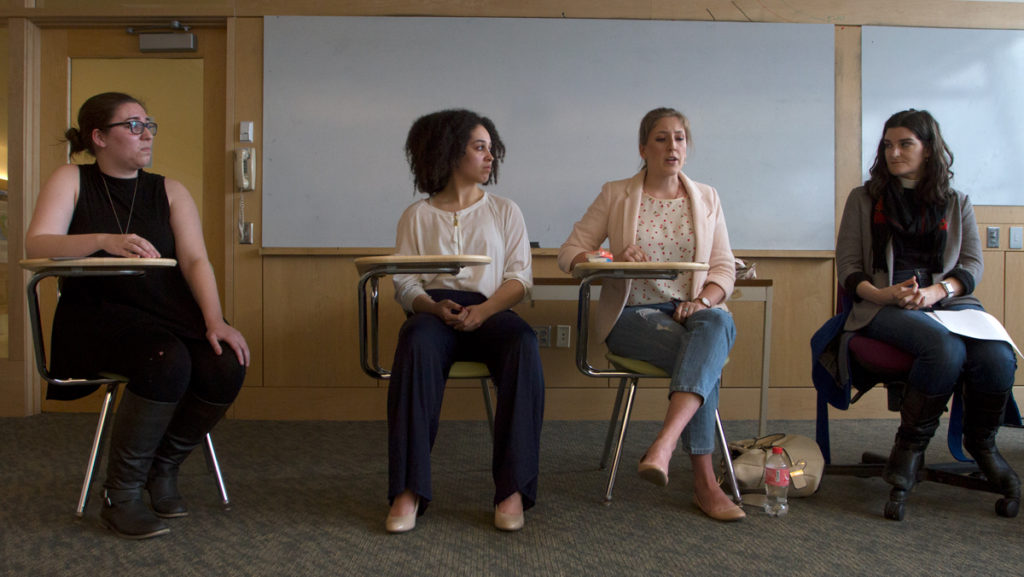 “I came out, and the people I considered my closest friends, my mentors, the people that I entrusted with my life when it was in shambles, seemed to abandon me,” Zimmerman said.

Zimmerman also shared stories of racial microaggressions that she experienced as a part of the community. She said that on one occasion at a retreat a white student and member of the community grabbed her hair, commenting that he did not have “colored folk” where he was from and that her hair was “crazy.” She said another upperclassman in the community told her to not share her experience with others for a fear of the community being perceived as racist.

Haldeman said the petition has three main goals. She said that the petition is advocating for the cease of college funding for the Protestant Community, a clear plan of action provided by the college administration to address the problems and the reinstatement of Zimmerman’s job as student assistant to the chapel secretary. Zimmerman became upset after a verbal confrontation with a community member in November 2017 when he insinuated that he was glad that she was not chair of the community because she was gay. Zimmerman then quit her job. Haldeman said the petition also calls for compensation for the 122 hours of work Zimmerman missed because she could not work in what she said was an unsupportive environment. The petition calls for the demands to be met by July 1.

Touchton said that in an effort to begin addressing these concerns, the Protestant Community’s mission statement was adjusted. Also, an evensong was held to facilitate dialogue on these issues, and a reading group was formed to discuss a book about the history of racism in America.

Touchton also said via email that the Protestant Community acknowledges and is dedicated to addressing the problems that Haldeman and Zimmerman have brought to light.

“Vanessa and Annalise spoke to the systemic nature of the hurt and pain they and others have experienced,” he said. “The Protestant Community board of directors, student leadership and myself agree with this assessment and are fully committed to addressing it. We are committed to working with all invested parties to listen, learn and live into the all-encompassing welcome of our loving God.”

Touchton also said he believes that these systemic issues will take time to resolve. He said that every member of the community deserves respect and that community members have failed to uphold Christian traditions and tenets of inclusiveness.

Haldeman said that many people are shocked at how much funding the Protestant Community gets and that she wanted to highlight that everyone’s tuition goes toward funding it.

John Barr, professor in the Department of Computer Science, is the chair of the Protestant Community Board of Directors, which is responsible for allocating funding for the budget. Barr said via email that the Protestant Community received $53,378 from the college for the 2016-17 academic year. Religious communities housed in Muller Chapel—the Protestant, Catholic and Jewish communities—receive the same amount of funding from the college. The total budget for the PC was $71,528. Touchton’s salary for the same academic year was $58,728.

Barr said that the college’s funding combined with donations comprise the budget and also fund the chaplain’s salary. Barr also said that neither the board of directors nor the college provides Touchton with benefits of any type.

Haldeman also said the reason IC Color is asking the administration to step in is that it is difficult for a community to hold itself responsible. Haldeman said she does not want funding to be taken away permanently but until there is evidence of systemic change.

“That’s a lot of money,” Haldeman said. “We are asking you to provide a clear plan for the community because a community doesn’t always change itself. You need an outside force to guide that along.”

She also said the July 1 deadline may make it difficult to achieve all the demands.

“I think that it’s good that they are asking for deadlines,” Bierly said. “I can understand from their perspective that it’s really difficult to have experienced discrimination in a community that’s supposed to be loving and welcoming.”

She also said that she would not remain a member of the community if she did not see initiatives to create this systemic change.

Maurer said LGBTQ liberation cannot be achieved if the movement is not intersectional in nature. Maurer said his work at the college and throughout his life has been in inclusion for LGBTQ people from all backgrounds. He said he thinks the college needs more direct mechanisms to allow students to report instances of discrimination.

He said it is important to support LGBTQ people and people of color of faith who are a part of the Protestant Community. Maurer also said he has many resources for students on having difficult conversations in faith communities and in addressing systemic racism.

Haldeman said there will be a meeting May 3 at 5:00 p.m. in the Cayuga Lake Room for students who are interested in being more involved with the campaign. She said that if the demands of the petition are not met by July 1, the campaign will continue into Fall 2018.