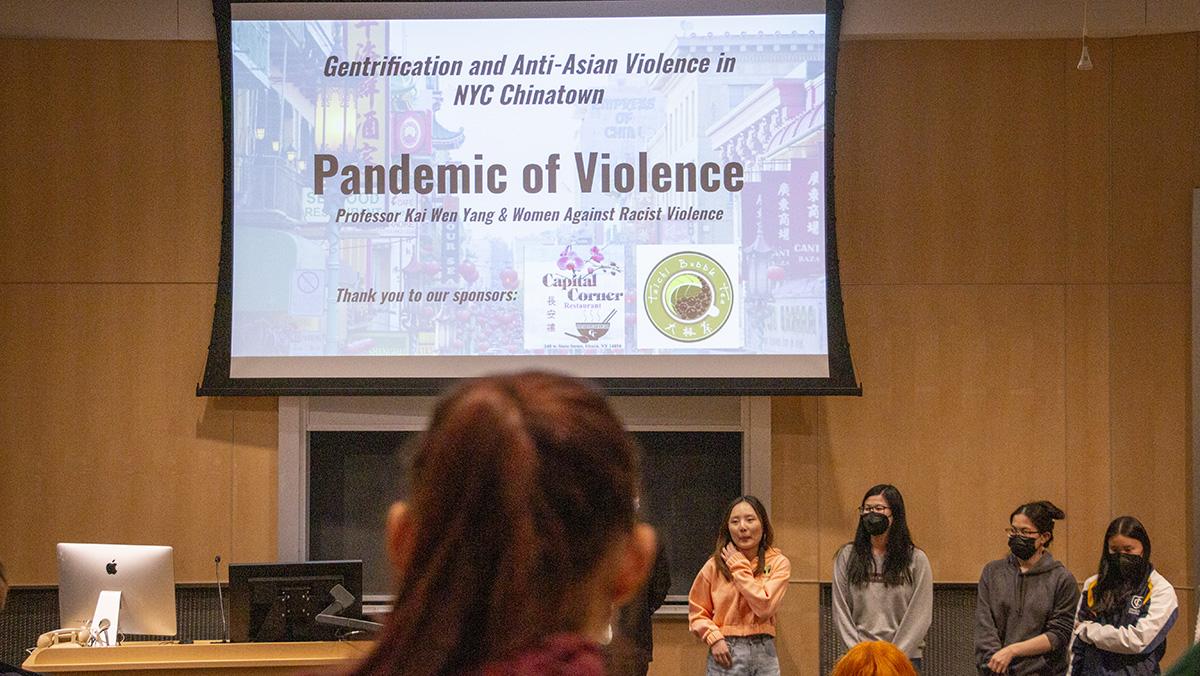 Abby Brady/The Ithacan
On April 12, members of the Ithaca College community gathered to discuss labor issues in Chinatown — as well as the ongoing gentrification and violence against Asian American communities — at the Pandemic of Violence event.
By Elijah de Castro — News Editor
Published: April 13, 2022

As the ongoing labor movement brings long-unaddressed labor issues into the political limelight, activists have been raising awareness for workers in Chinatown, New York City, who face 24-hour workdays and little pay.

On April 12, members of the Ithaca College community gathered to discuss this issue — as well as the ongoing gentrification and violence against Asian American communities — at the Pandemic of Violence event. The event featured Kai Wen Yang, visiting professor in the Center for Study of Culture, Race and Ethnicity; Kathy Lu, member of the activist group Women Against Racist Violence; and Zishun Ning, an activist from New York City. The event was a collaboration between the Chinese Students and Scholars Association (CSSA) and the Asian American Alliance (AAA) and about 50 students attended.

At the event, Yang, Lu and Ning each challenged mainstream progressive solutions to economic inequality. Additionally, they criticized narratives presented by progressive politicians in the New York City area, who they say inadvertently help those exploiting workers.

“Despite progressive media, politicians and academics telling us that we can fight against racist displacement by doing more affordable housing and that we can fight the 24-hour workday by giving workers a higher wage, in Chinatown these are not solutions,” Yang said. “The quote-unquote ‘progressives’ have continued the pandemics of racist and sexist violence in Chinatown.”

Since the Stop Asian Hate movement began in response to COVID-19-related anti-Asian racism, the New York City political establishment responded by pouring money into Chinatown’s non-profit organizations, most notably the Chinese-American Planning Council (CPC). In New York City’s 2022 budget, tens of thousands of dollars were given to CPC.

“They [CPC] are led by an elite type of Asian American who spend a lot of money lobbying and branding themselves as progressive non–profits,” Lu said. “They themselves are a huge homecare agency and have spread the 24-hour workday across the homecare industry — they were one of the first ones to start doing it. They’ve done a lot of very bad things in the court and legal system in order to keep it going.”

Freshman Navroop Kaur attended the event and said it helped her understand more about worker’s personal experiences beyond what is portrayed in the media.

Despite projecting to be a social services organization helping New York’s Asian American community, CPC engages in widespread exploitation of working Asian, Black and Latina immigrant women. Workers in CPC’s homecare facilities are paid for only 13 hours when they pull 24-hour shifts, which occurs multiple days per week. Lu said that despite this practice being against labor laws and having gone on for years on end, CPC can get away with it because of the lack of rights immigrants have as workers in comparison to American workers.

“When CPC looks at Asian and other immigrant women of color, they just see a cheap disposable woman to be worked to death,” Lu said. “Some people even say ‘Why are you going after this Asian agency? We need to support each other.’ But this is how systemic racism can continue, because it has even progressives and radicals defending it.”

Senior Jingwen Ou, the president of CSSA, said as someone who is not from New York City, her awareness of the issues happening in Chinatown were low prior to the event. However, when she reached out to Yang to organize the event, Yang asked Lu and Ning to attend.

“For the Asian American community, I didn’t realize this was as big of an issue as it is,” Ou said. “I know that in New York City when a lot of Asian immigrants come here they get paid under the table, so it makes sense that it’s not as regulated. I know my family kind of came through that way. It’s something people should definitely be more educated on.”

Ning and other activists have also been fighting the Museum of Chinese in America (MOCA). In 2021, MOCA accepted $35 million from the city in exchange for the construction of what could become the world’s tallest megajail, brokered by Chinatown’s Councilmember Margaret Chin. Since then, daily protests have broken out to stop its construction. Additionally, activists have been fighting Chinatown real estate czar Jonathan Chu, who has gone on an eviction tear that kicked the historic restaurant Jing Fong out of Chinatown.

Kaur said that hearing the stories about the exploitation of immigrant women in Chinatown hit home and made her emotional.

“My connection would be my mom, who does work very long hours,” Kaur said. “Hearing about some of the stuff they were talking about, especially with the different structures put on race and the way people view immigrant women … To hear that and see all the different stories of other different women. It was definitely very emotional. It’s just shocking.”