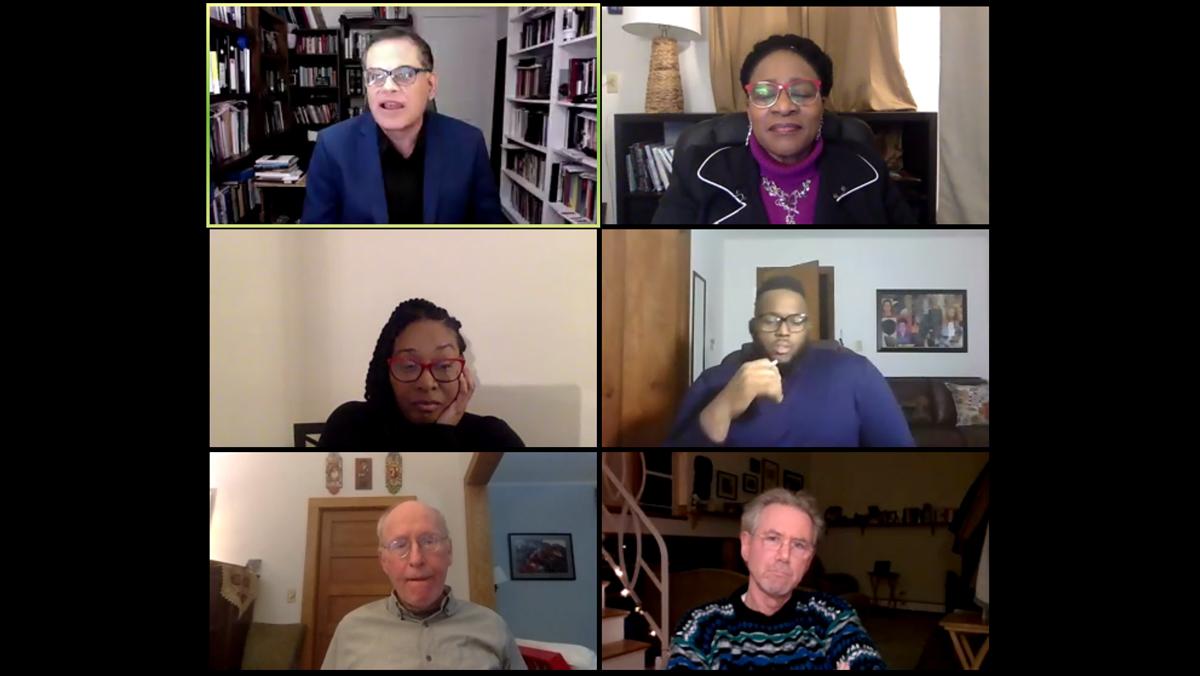 The Park Center for Independent Media (PCIM) hosted “Unpacking Election 2020” to analyze the outcome of the U.S. presidential election and discuss what the next four years will look like under President-elect Joe Biden’s presidency.

Although Election Day was Nov. 3, a clear winner between President Donald Trump and Biden was not determined until Nov. 7. The election process had been drawn out, with the counting of mail-in ballots expected to take several days or weeks beyond Election Day. Even before all of the ballots had been counted, Biden had received more than 74 million votes while Trump received 70 million, as of Nov. 6, according to the Pew Research Center. Despite Biden’s victory, Trump refused to concede the election, filing several lawsuits in key swing states.

“The elections are over, but in so many ways this has been an extraordinary phase of U.S. politics,” Rumi said.

Tom Shevory, professor and coordinator of the legal studies program in the Department of Politics, said that while Democrats have won the popular vote in the past four elections, demographic trends depict shifts among Hispanic voters toward Republicans in places like Miami-Dade County in Florida and south Texas. While individual shifts in political affiliation have not had much of an effect on the overall balance of the electorate, there have been significant shifts within demographic groups like education level and race, according to the Pew Research Center.

“The Democrats have a lot to be thankful for in this election, but, in some ways, it seemed like it was a close election,” Shevory said.

Shevory also questioned how present Trump, his ideals and supporters will be in politics and media.

“One question I have is what happens with Trumpism without Trump?” Shevory said. “Is there such a thing as Trumpism, or is Trumpism only Trump?”

Peyi Soyinka-Airewele, professor in the Department of Politics, said that she thinks the emergence of white supremacy in the past four years was not a fluke but rather the result of systematic racism transforming Trump into an idol.

Experts have warned that Trump’s inflammatory comments — which have mirrored the rhetoric of white supremacists — have encouraged right-wing militant groups to bring violence and fear to cities following anti-racism protests.

“For the [Make America Great Again] nation, I think they wanted to be reassured of the security of the true American [individual], … which was to be white and to be protected against COVID, against Black people, against leftists, against terrorists, against criminals, against immigrants,” Soyinka-Airewele said.

M. Nicole Horsley, assistant professor in the Center for Study of Culture, Race and Ethnicity, said she thinks that Vice President-elect Kamala Harris will have a large part in bringing equality to the forefront of U.S. politics. She said that there is an ongoing battle in the U.S. to recognize the humanity of Black people. Black women in particular face many legal barriers in securing the right to vote, despite the passage of the 19th Amendment.

“I think she understood the importance of the visual narrative that she painted for us … and that she is a proud daughter of immigrant parents, and what does that come to mean for her moving forward in this country,” Horsley said.

Horsley also said that Black women have played an integral part in political movements, often rallying one another in sororities and churches. In regards to the 2020 election, Horsley said she thinks that Trump presented a reason for Black women to vote.

“Trump presented a very immediate need and attention to stand up and vote,” Horsley said.

There were 30 million eligible Black Americans who were eligible to vote in the 2020 election, according to the Pew Research Center. Black women played a large role in mobilizing people to vote, especially in critical elections.

Jeff Cohen, former director of PCIM, said that Trump used his presidency to help to enable racist ideologies, all while benefiting from his large presence in the media. Particularly, Cohen said that Trump has been able to succeed as a result of polarized media.

At the first presidential debate, Trump refused to condemn white supremacist groups, instead instructing the Proud Boys to “stand back and stand by.” The Proud Boys is a far-right, male-only organization. It insists it is not a part of the “alt-right,” but members of the Proud Boys attended the “Unite the Right” rally — a white nationalist rally — in Charlottesville, Virginia, in 2017.

“There are many reasons why Trump succeeded quite recently,” Cohen said. “I would argue that one of the reasons is that there is now, built up over the last few decades, a national right-wing media infrastructure.”

Additionally, Cohen said that the mainstream media’s coverage of the Trump presidency was different because it was not afraid to hold Trump accountable. He said that while previous presidents have lied, the media was complacent in the sense that it never called them out.

News reports regarding Trump have been more negative, focusing on his personality rather than his policies and assessing his actions more negatively, according to a study from the Pew Research Center. Trump’s first 60 days in office were mostly marked with negative news stories, with more than twice the negativity in comparison to news stories regarding former presidents Bill Clinton, George W. Bush and Barack Obama’s first 60 days.

“As we look to the next year in terms of media, I fear that the middle–of–the–road mainstream media will go back to their normal stance, which is allowing the Democratic Party and political leaders to lie,” Cohen said.

RahK Lash, director of the Center for Inclusion, Diversity, Equity and Social Change, said that when looking at demographic trends, like Black voter turnout, people should question what is not known and what is missing.

“Numbers don’t lie, but they can tell any story we want them to tell,” Lash said.

Lash said that youths played an important role in influencing the election, both in protesting and voting. He said that for many of his students, it was their first time voting. Approximately 52%–55% of voting-eligible young people ages 18–29 voted in the election, according to an analysis from Tufts University.

“Our youth in our country are not just showing up to demonstrate and protest in the streets, … but they’re also showing up to the ballots,” he said.

Another attendee asked how the U.S. can move forward, despite being a divided nation. Horsley said that she thinks Trump was a catalyst that brought to the attention of many Americans how flawed democracy is.

“I don’t think Trump is the problem,” Horsley said. “I think he revealed what the problems are.”