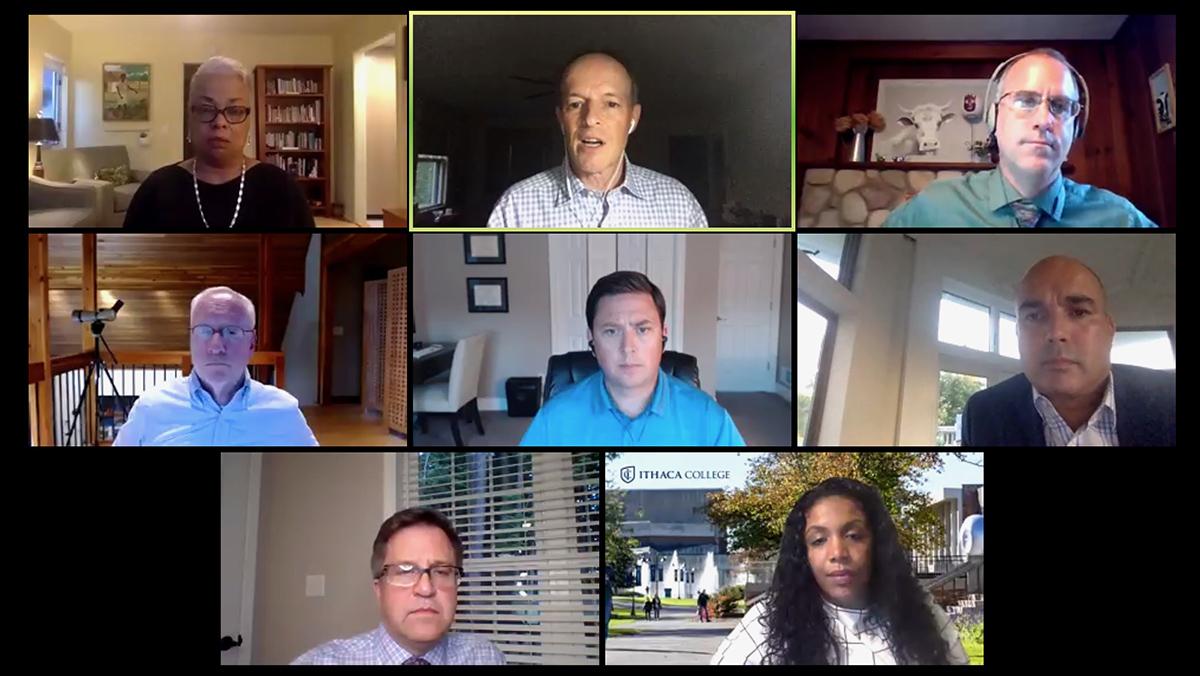 Cornish, Ferro and Guerrero spoke about Ithaca College’s Aug. 18 decision to reverse its reopening plan and hold almost all classes remotely, reiterating much of the information that was shared with the campus community earlier in the day. Cornish said health and safety, student life and academic experiences were the three main reasons the administration made this decision.

“At the end of the day, we did not want to bring our students back to campus in the fall, only to have them have to go back home in a few weeks,” she said.

Cornish said that by choosing to go completely remote, the college is maintaining academic continuity for students. She said that faculty members have prepared for both online and in-person learning and will be fully prepared to administer classes virtually by September.

Ferro said that even though most students will not be living on campus, there are a few exceptions. She said physical therapy and occupational therapy students who have hands-on classes will have in-person classes. There is also an exception form for students dealing with housing or personal hardships to fill out if they need to live on campus. Ferro said that the college expects the number of students who will reside on campus to be small and that the college wants all of its students to be able to continue their studies, regardless of location.

Ferro said that there are students who signed leases for off-campus housing and will be living in Ithaca this year. She said the college does not typically have hands-on involvement with those students, but, because of the current circumstances, it will be putting protocols in place and repurposing staff members to work directly with the students. These students have also been invited to be tested on campus.

Guerrero said that the college began to hold COVID-19 testing for Ithaca community members last week. Of the 482 tests administered, there were no positive cases. He said that testing will continue this week.

The college is working with Tompkins County to ensure that if an individual tests positive, there will be contact tracing for those who the individual has been in contact with and that county metrics and data will be updated.

“We’re just proud to be part of this community, to respond to these unprecedented times,” Guerrero said. “There’s no right answer.”

Ferro said the college is also launching an on-campus public health campaign and will have staff members from the Office of Student Conduct and Community Standards who will respond to violations of social distancing guidelines by students, both on and off campus.

Ferro said that the college is launching programming from the Office of Residential Life for students to interact with other students they were going to live with in their residence halls. Ferro also said the college is creating a public health task force that will implement the college’s return to campus plan, minus the return of students to campus.

“Our hope is that we’re going to still be engaged with our students even though we’re remote and they’re not going to be invited on campus for multiple things,” Ferro said. “We still have a sense of responsibility to our students in many ways.”

Reifenheiser and McCalley discussed TC3’s reopening plans. Reifenheiser spoke about the equity issues TC3 students faced when they went remote in Spring 2019 because of the COVID-19 pandemic. He said that some students were attending their virtual classes and completing class work on their phones or were sharing computers and some had little to no access to Wi-Fi.

“What we discovered was we know that our students are vulnerable,” he said. “It can be a really small thing that can really lead to them just giving up on their education.”

“One of the things that we learned is that too much video conferencing is a thing,” he said. “It can be very, very difficult to be engaging over all of that time frame within that medium.”

McCalley spoke about the residential life of the TC3 campus. He said that most students are commuters, but students do live in the residence halls. Dorm capacities have been reduced from 450 to 500 students per dorm to 200 to 250 per dorm, McCalley said. He also said there will be a phased return to campus, beginning with students from states on New York state’s travel advisory list who have to quarantine for 14 days. Athletes and students in special programs will return to campus, and then the rest of the students will return.

He said that every undergraduate student will be tested twice a week and have to complete daily health screenings.

“Let me just say we will have more cases,” Kotlikoff said. “We will be identifying individuals that are positive, and case numbers will go up.”

He said that Cornell has tested over 7,000 students, and four individuals have tested positive for COVID-19.

Lombardi said that move-in for students began Aug. 17. He said the campus occupancy decreased from approximately 7,000 to 4,000 or 5,000 students.

Lombardi said that Cornell welcomed 340 students to campus, and 321 were tested upon arrival. Some students arrived late and spent the night in their residence halls and were tested the next day.

“I want to be clear,” Lombardi said. “We’re working through this, and we will have hiccups in the process. I don’t consider our students who came in late last night to be a hiccup, but I do understand this is rapidly evolving and anxieties are high.”

He said there will be a team of public health ambassadors on campus to encourage mask–wearing and physical distancing. He also said that Cornell fraternities and sororities have agreed to not hold parties.

There was a question and answer session near the end of the meeting.

In response to a question about changes the colleges have made in light of the COVID-19 pandemic, Cornish said that Ithaca College has institutionalized its emergency preparedness plans in the case of another global pandemic or emergency. She said the college did this by promoting Christina Moylan, former associate dean of the School of Health Sciences and Human Performance, to director of public health emergency preparedness.

“This COVID has made us realize emergency preparedness has to be a part of everyday life of the college,” she said. “It is not just COVID but COVID and beyond. Should something happen after this, we will be ready.”