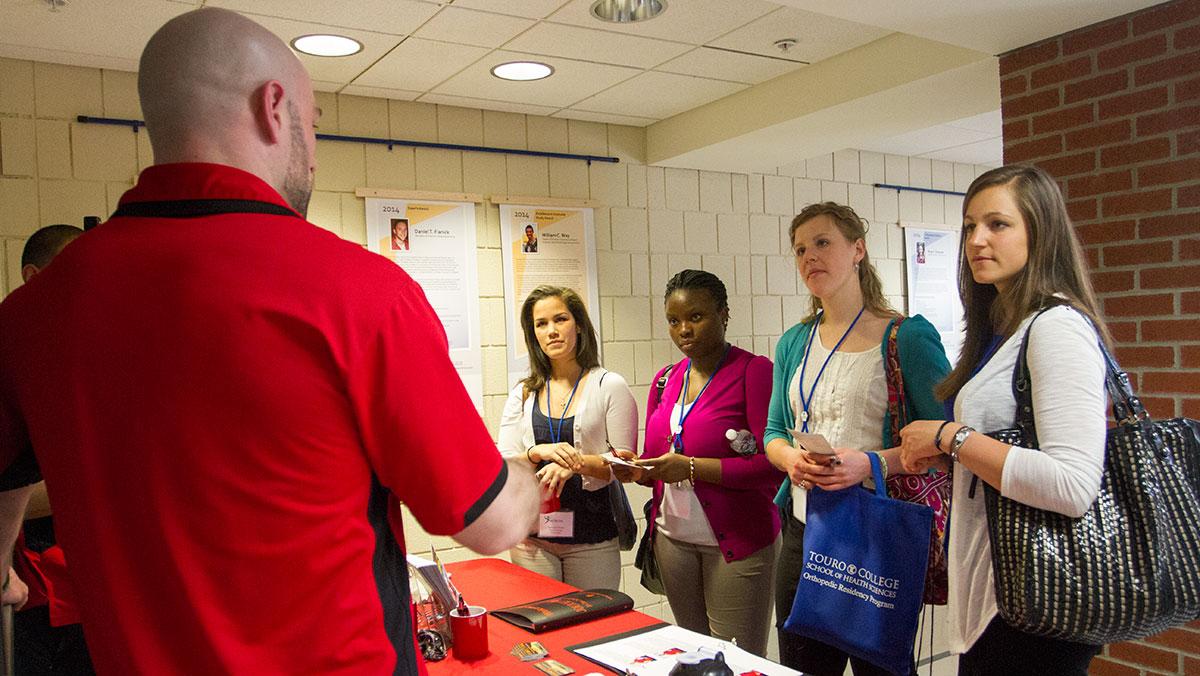 Amanda den Hartog/ The Ithacan
Ithaca College, in partnership with the New York Physical Therapy Association and other schools in the region including Nazareth College, Clarkson University, Upstate Medical University and Onondaga Community College, hosted a wide array of presentations and job fairs throughout the day.
By Mark Prowse — Staff Writer
Published: April 22, 2015

The Department of Physical Therapy at Ithaca College expanded its outreach, tightening its focus on professional development by hosting the first New York State Regional Conclave on April 18 in the Center for Health Sciences.

The college, in partnership with the New York Physical Therapy Association and other schools in the region including Nazareth College, Clarkson University, Upstate Medical University and Onondaga Community College, hosted a wide array of presentations and job fairs throughout the day. Twenty-eight speakers covered subjects ranging from NYPTA leadership to new and emerging practices in numerous fields of physical therapy. Over 180 student attendees were recorded.

Candice Brown, a fifth-year physical therapy major at the college, worked alongside a committee of nine other students to make the event possible. She praised her co-workers as being organized, efficient and reliable.

“Having a solid team in the beginning was really important,” she said. “Because everyone did their job well, we were able to focus on the details.”

She said the event helped students get more of a sense of the framework for their futures in physical therapy. Expanding the lectures into the emerging world of the profession, she said, is an invaluable experience for prospective graduates.

“It lays the foundation for what people dream of going into,” Brown said. “It helps students get exposed to subjects we don’t normally have conversations about in conference settings. We have the classroom experience, but the conference experience is what sets us apart.”

Patrick VanBeveren, former president of the NYPTA and current director of Physical Therapy Services at the Centers at St. Camillus, presented the opening keynote presentation in Textor 102. His discussion focused on a number of topics including physical therapy in health care, the profession’s development and entry and post-entry level education. He continued this discussion in a presentation titled “Leadership and Development for Students in the NYPTA/APTA” later in the afternoon.

During the afternoon presentation, he outlined the need for a structural change within the culture pertaining to mindsets of insurance companies, physical therapists and their patients. He said too much importance is placed on insurance reimbursements for their services rather than on the actual value of those services, and nothing is being done to change the way the system is financed.

“I’ve seen it,” VanBeveren said. “I know we’re used to treating somebody to get reimbursed. And we continue to want to get reimbursed more and we don’t change the paradigm. We can’t just keep going to the insurance company and beg for more money. We’re not going to win that way. We have to change the way that we do that.”

He said the best way to address those systemic changes and get involved with regional and national physical therapy organizations is to volunteer at local levels. That way, he said, a student or recent graduate can play a part in health care and pharmaceutical conversations as soon as they enter the workforce.

“I would say you’d get involved at the district level,” he said. “You go to the district meetings, you meet people and you volunteer. I think right now, from the time you start being on affiliations and being in professional surroundings, you look for a mentor. Mentors are hugely important.”

Nathan Storb and Ryan Norland, both sixth-year physical therapy students at the college, also served on the committee for organizing the event. Both said the proceedings were a success, bringing a range of topics together for discussion under one roof.

“It really broadens your mind,” Storb said. “But it definitely narrows where you are in terms of scholastics.”

Both Norland and Storb said they laid a great framework for similar events in the future. As of right now, Norland said, they are planning on following up with a second conclave next year.

John Winslow, assistant professor at the college’s Department of Physical Therapy, provided the event’s closing keynote discussion later that afternoon in Textor 102. The presentation, titled “Don’t Talk to the Chair,” centered around his experiences working with a former patient, John Grandizio, and concluded with his advice to graduating physical therapy students.

“Listen to your patients, hear what they have to say and involve them with your care,” he said. “[Grandizio] said when he was working with students, he said it was like they were talking to the chair. He said, ‘I was a person in that chair. I had feelings, emotions — I had dreams and aspirations.’ … Get to know your patients on a personal level. Don’t talk to the chair.”