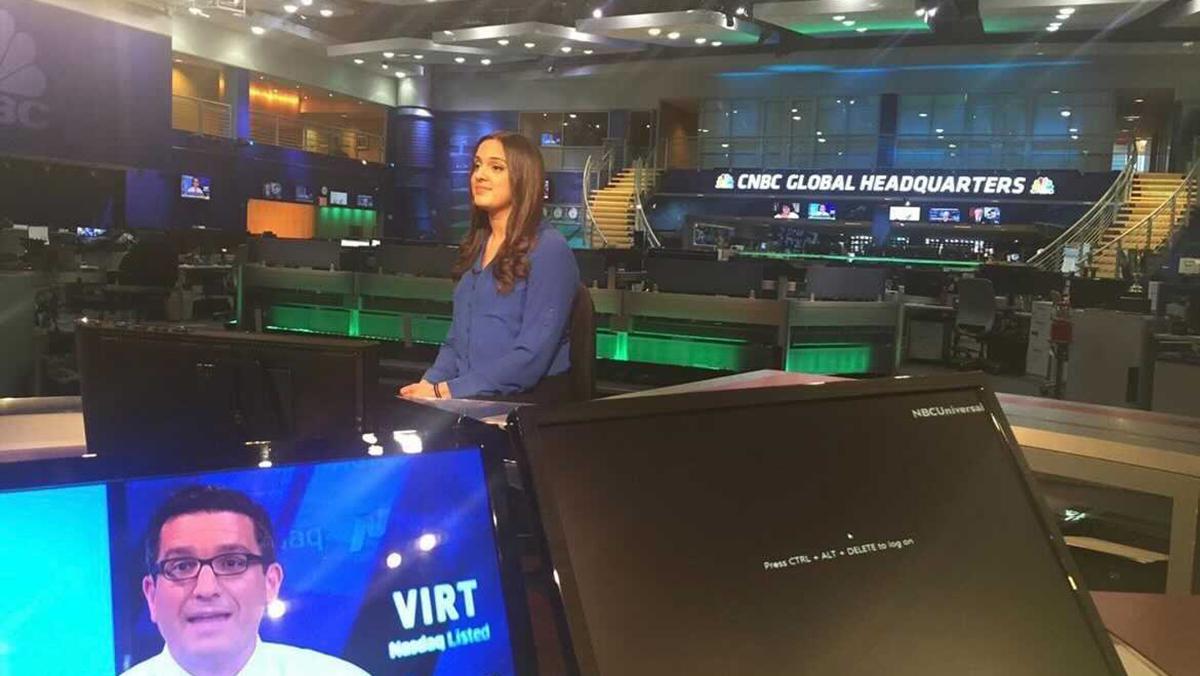 Courtesy of Devin Hance
Devin Hance ’15, who graduated with a television-radio major, was shocked to hear that the program, which she attended during both Spring 2014 and Spring 2015, had ended. Throughout her time at the program, Hance obtained internships at CNBC, NBC Sports and CNN.
By Olivia Stanzl — Assistant News Editor
Published: April 20, 2022

From Spring 2012 to 2020, the Ithaca College New York City program (ICNYC) offered students hands-on experience through internships located in the Big Apple. However, in March 2021, the college announced that the program had been cut.

In a March 11, 2021, intercom post, the college announced the reopening of only the London Center and Los Angeles Center satellite programs after they were paused for the 2020–21 academic year because of the COVID-19 pandemic.

“As you may know, Ithaca College temporarily suspended its New York City Program (ICNYC) due to the pandemic, closing the site as of Spring 2020,” the post said. “The college has determined that it will continue with its suspension of this program in 2021–22 … We extend our deep thanks to the Center’s former director, Hersey Egginton, for his dedicated support of the program.”

The program allowed students to spend a semester in the city while working an internship and taking college courses, including a weekly seminar. Students had to find their own internships, a place to live and transportation to their internship.

Since the ending of the program, Egginton has retired because he said he did not think he would be able to find another job that brought him that level of fulfillment and satisfaction.

“It was the best professional experience of my career,” Egginton said. “I just enjoyed every student that I worked with.”

This is not the first time the college discontinued a satellite program. In 2019, the college ended its eight-year partnership with Cornell University’s Cornell in Washington domestic program because of high costs, as previously reported by The Ithacan.

Devin Hance ’15, who graduated with a television-radio major, was shocked to hear that the program, which she attended during both Spring 2014 and Spring 2015, had ended. Throughout her time at the program, Hance obtained internships at CNBC, NBC Sports and CNN.

“[ICNYC] saved my [college] experience,” Hance said. “It changed my life. I don’t think I’d be where I am now had I not landed those gigs — it literally gave me my first job.”

Michael Kaplan ’85 taught at the program throughout the entire time it was open and said the program was centered around an internship that gave students hands-on experience in their field of interest.

“I think it allowed people to work in the real world,” Kaplan said. “And there’s something about … when you spend 15 weeks working with people, having assignments, having due dates, it becomes a real world.”

Sam Kuperman ’16 attended the program spring semester of his junior year, where he interned within the sports department of New York One. Kuperman helped with production and worked within the nightly sports show. He said when he applied to the college, the ICNYC programs were one of the factors that stuck out to him.

“I think when you’re in a city that big, that has so many different opportunities, whether that be in my field, in media, or if it’s outside of that, you have a chance to get some experience,” Kuperman said. “In my opinion, when you have more opportunities, you get more bites at the apple.”

Sophomore Lauren Thier said the New York City program attracted her to the college and that she planned to attend the program before the college announced it had been cut.

“I thought it would give me a lot of opportunities to live in my dream city after college,” Thier said. “I knew that you could get internships there for my major, television-radio, which is why I wanted to go there. During my senior year of high school, I had this all planned out.”

Hance said one of the reasons New York City was so appealing to her was because it made the cost of attending college less expensive.

“My grandmother, at the time, lived in New York City, so knocking off room and board right there, … it just made sense to me,” Hance said. “I was like, ‘I will work, gain experience on my resume, get paid and I’ll save on tuition.’ It was a win-win all around.”

Kuperman said he was drawn to the program because he believed it was a unique and beneficial opportunity.

“New York City itself carries a name brand. … I think that’s meaningful,” Kuperman said. “I really do think that that helps when you are trying to land a job and they look at your resume.”

Egginton said despite the program being over, it still has a big impact on his life.

“I think about it all the time,” Egginton said. “I see a lot of my former students on LinkedIn. It just continues to be very fulfilling for me to see them get promotions and, you know, engage with their professional colleagues. I knew I wasn’t going to do it forever, but on the other hand, I was looking forward to the next year.”

The Ithaca College New York City program was back in session this week at the Cornell ILR Conference Center.

ICNYC is back in session