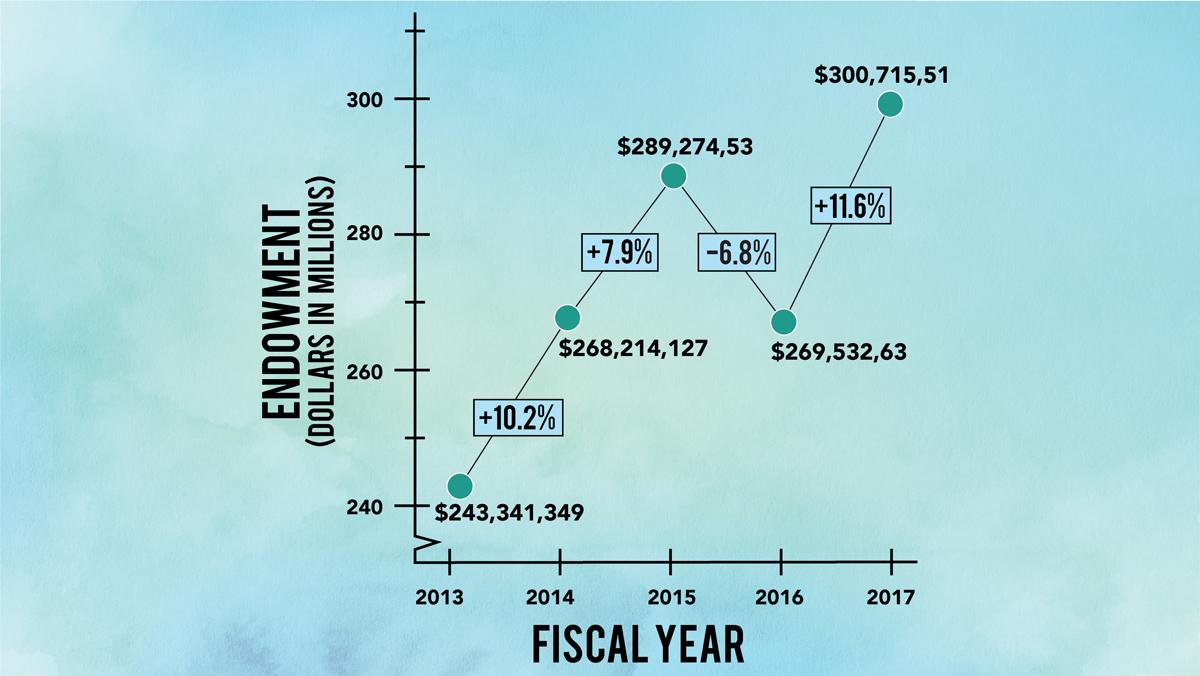 The Ithaca College endowment topped $300 million for the first time in 2017, an 11.57 percent and $31.2 million increase over the year prior. This was the largest percent increase since 2013 and reflects a national increase in college and university endowments in 2017.

The long-term performance of college endowments carries more weight than one-year returns. In the last 10 years, the college has averaged an annual endowment gain of 3.5 percent, lower than the national 10-year average of 4.6 percent as calculated by the National Association of College and University Business Officers’ Commonfund Study of Endowments.

Since the 2009 fiscal year — after the stock market crashed in 2008 — the college’s endowment has grown $137.3 million, or 84 percent. This increase helps the college fund three main areas, Chris Biehn, vice president of college relations and advancement, said. Those areas are student financial aid, employee salaries and athletic and academic programs.

“The endowment is meant to be a way of providing a foundation and infrastructure for financial support,” Biehn said.

“At the beginning of the past decade, 2008–09, we were at the height of the economic downturn,” Redd said. “Financial markets have been very volatile since then.”

Redd also said that returns for endowments have been flat or negative for four of the last 10 years.

The college has the fourth smallest endowment among the 20 colleges in its peer group. The peer group is defined by the college as the institutions that have the highest number of applicants in common with Ithaca College. The endowments of the college’s peer institutions range from New York University with $4.1 billion to SUNY Albany with $65.3 million.

Biehn said that the college likes to look at its endowment in terms of the amount per student, instead of the total amount. In 2017, the college’s endowment was approximately $50,113 per student.

The college spent 4.5 percent of its endowment in 2017, a figure that is directly in line with the national average for colleges with endowments between $101 and $500 million. The endowment per student multiplied by the spending rate amounts to $2,255 spent per student per year.

“The larger the endowment, the more per student, so that we can offset and supplement when people are awarded financial aid, in order to continue to attract and retain talented faculty and staff, and provide that program experience both academic and cocurricular for the students,” Biehn said.

Steve Novakovic, assistant professor in the Department of Finance and International Business, worked for 12 years in the Cornell University Investment Office, helping to manage their endowment. He said college endowments are meant to help institutions exist forever.

“Most colleges are hoping to be open forever, in perpetuity, and one of the ways you can try to ensure your long-term financial stability and goals is by having an endowment that is designed to exist in perpetuity,” Novakovic said.

While the college’s endowment is more than double NACUBO’s national median of $127.8 million, Novakovic said that the line between what is considered big and small endowments is usually a billion dollars. Larger endowments are able to allocate more of their money in alternative investment opportunities such as real estate, venture capital or hedge funds, Novakovic said.

Endowments grow from two main avenues: alumni gifts and investment returns. In the 2017 fiscal year, $2.42 million was donated to the college’s endowment, which makes up 23.8 percent of the total amount raised by the college. The endowment grew $31.2 million, meaning the vast majority of the growth was from returns on investments.

The stock market did post a down week from Feb. 2 to Feb. 9, and the Dow Jones Industrial ended the week 5.2 percent lower.  Biehn said this will have a lesser impact on the endowment than it does on the stock market.

“Over the long term it will have some impact but not at the same level of volatility as it does to the market value of traded securities from week to week,” he said.

In the 2016 fiscal year, the college saw donations drop from $14.7 million to $8.2 million, the smallest amount raised in donations since the 2005 fiscal year. The 2016 fiscal year included turmoil on campus with protests led by POC at IC over racially charged incidents that included calling for the removal of President Tom Rochon. Rochon announced his planned retirement in 2016.

“There was a drop in donors and dollars and donor retention in FY16 and FY17 following the events in the fall of 2015,” Biehn said.

In terms of donations, Biehn said that the 2018 fiscal year has looked like a strong year thus far, returning to donation levels the college saw before the 2016 fiscal year.

“We’ve seen a jump in contributions since the [125th] celebration on campus and we seem to be returning to, both in donors and in dollars pre-fiscal ’16 results,” Biehn said.