IC faculty concerned about the appointment of Betsy DeVos 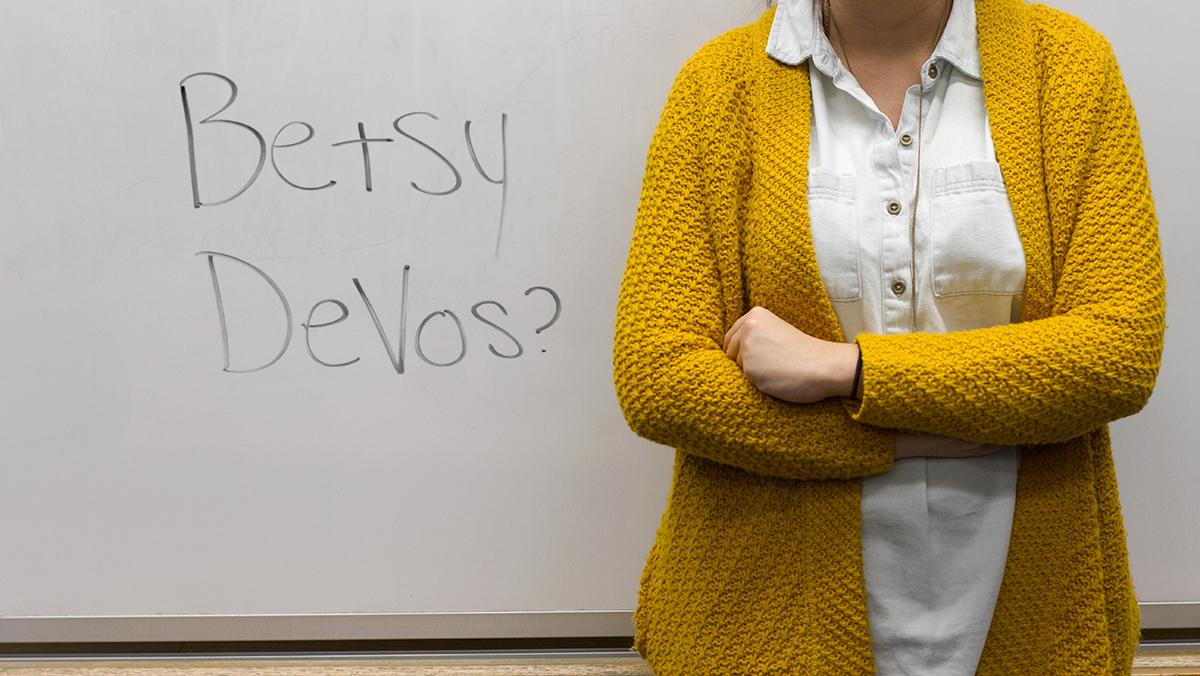 Connor Lange/The Ithacan
Ithaca College students and faculty are concerned about the appointment of Betsy DeVos as Secretary of Education citing her lack of experience, beliefs and the impact she will have on the education system.
By Steph Siok — Staff Writer
Published: February 8, 2017

Members of Ithaca College’s faculty are concerned Betsy DeVos lacks the experience and qualifications to serve as secretary of the Department of Education and that her philosophies disadvantage marginalized communities.

DeVos was confirmed Feb. 7, with Vice President Mike Pence’s breaking the tie after a Senate filibuster Feb. 6. The 24-hour filibuster, referred to on social media as “#HoldTheFloor,” was an effort to block DeVos’ confirmation.

DeVos is a conservative activist, billionaire and private school supporter. She has served as chair of the Michigan Republican Party and is on the board of the Foundation for Excellence in Education. She is receiving harsh criticism from many people, from civilians to senators, about her ability to hold the office of secretary of education, citing her minimal experience working with public schools, insufficient knowledge of education laws and lack of experience with college financial aid.

Associate professor Jeane Copenhaver-Johnson, chair of the Department of Education, said she is deeply concerned about what the appointment of DeVos could mean for schools throughout the United States.

“She lacks appropriate experience with public P–12 education, seems unfamiliar with the most basic information about federal education law that any Ithaca College teacher education student would know, and has a history of participating in efforts to shift public education dollars toward private and charter schools, including for-profit charter schools,” Copenhaver-Johnson said.

She said having DeVos as secretary of the Department of Education is comparable to having a surgeon unfamiliar with medical technique.

“The policies advanced by Ms. DeVos as a lobbyist and contributor to political campaigns run counter to what we know about furthering educational equity for the populations who are currently least well-served by schools and by a society in which income inequality is rampant,” she said.

Copenhaver-Johnson said she thinks DeVos’ school-choice stance — supporting programs that give families funds to be able to choose private schools for their children — is dangerous for public school districts.

“In Ohio, for example, when children were allowed to attend private religious schools as part of school choice, the public school districts suffered because of the losses of funding,” she said. “The population of students who remained behind in the public school districts disproportionately were those with fewer economic resources and more special needs, and the schools had fewer dollars to offer the appropriate supports.”

Zenon Wasyliw, professor in the Department of History and coordinator of the social studies teacher education program, said he thinks one of the biggest issues with DeVos is that she is business–oriented, looking to advance for-profit schools and not focus on public ones.

“With public schools, you have local boards of education keeping an eye on the process,” Wasyliw said. “The Department of Education doesn’t really control local school boards, but local influence can disappear if you have this laissez-faire approach to education.”

Veronica Santana-Frosen, an instructor of legal studies, said she feels worried about DeVos’ appointment and does not agree with DeVos’ platform or ethical decisions regarding education.

“I have concerns, ethically speaking, if she’s the right person for the job, and by ethically, I mean the allegations of plagiarism that are surrounding her answers at the confirmation hearing, as well as what I know of her background,” Santana-Frosen said.

Santana-Frosen said she has only been teaching since 2014 and has just started learning about the world of education theory and the right ways to educate children.

“I think her agenda is not necessarily in the best interest of the public or the people,” she said. “She has a different agenda.

She said that DeVos’ agenda would sidestep the issues that impoverished communities’ education systems are facing. She also said DeVos highly favors giving less regulation to charter and private schools, which would essentially mean they can operate by their own rules.

Santana-Frosen said she can see only one positive coming from this: People will be paying more attention to and getting more involved in what is going on in the country, which she said she has noticed in this election more than any other before.

“The American public has been so much more involved in this election and the past several elections, as well as the publicity around all of these different appointments,” she said. “I think it’s very different now than it was eight, 10, even 12 years ago; people didn’t have as much at stake as they do now. It’s going to wake people up and keep people interested in public education and the agendas they have about it. She’s going to be under a lot of scrutiny.”

Sophomore Laura Miller, a history major planning on changing to an English education major, said as someone who is going into education, she is frustrated with DeVos’ confirmation. Miller said she is considering teaching students with disabilities and students whose first language is not English — communities she is concerned DeVos would not serve because she did not commit to support Title I, a program that distributes funds to schools and school districts with high percentages of students from low–income families, and because she seemed to not know what the Individuals with Disabilities Act was.

“It’s really disappointing, I think, because she doesn’t really support any students who aren’t super privileged and students who already have the education that they need,” Miller said.

Both President Tom Rochon and Linda Petrosino, provost and vice president for educational affairs, said they had no comment on this issue.

This article has been corrected: Jeane Copenhaver-Johnson is an associate professor, not an assistant professor.