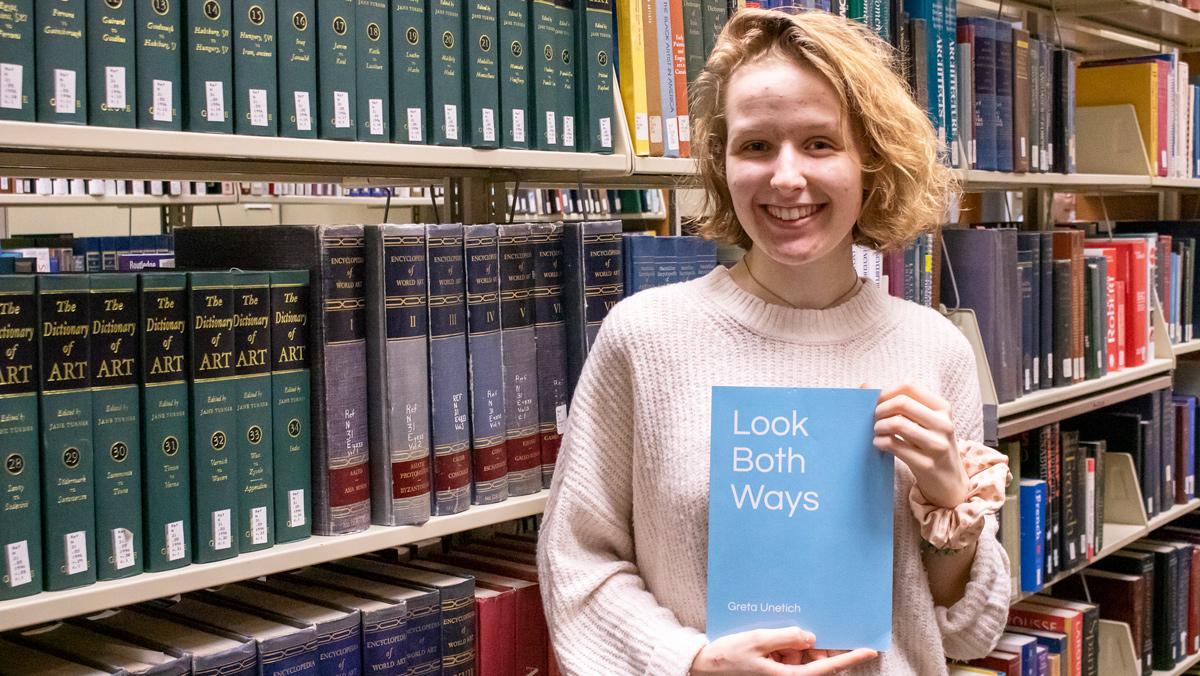 Ithaca College freshman Greta Unetich knew from a young age that she wanted to pursue a career in the STEM field. However, she also had another passion that she kept secret: writing poetry.

On Dec. 29, she independently published a book of poems, and she revealed her secret love for writing.

“I just didn’t feel comfortable telling people,” Unetich said. “When this book came out, it was a huge shock to everyone because they didn’t expect it. This was kind of written to prove that I can do both.”

The novel “Look Both Ways” is a collection of short poems based on her observations she has made in life about her relationships with friends and strangers that have impacted her. The poems also cover her experience of struggling between wanting to pursue both science and writing.

It has taken her five years, since she was in eighth grade, to write the collection. She published the novel through Kindle Direct Publishing, which allows authors to maintain ownership of their work and the price. The novel can be purchased on Amazon or her website for $8. She has currently sold 25 copies, she said.

Since publishing the novel, she said she has heard from some of her favorite writers, including Chris Purifoy, also known as Analog de Leon, and Emmy Marucci, who said they enjoyed reading it.

She said the book speaks to the struggle of figuring out what you want to pursue when you have multiple passions.

“I’m more than sure there are people who are dealing with conflicts if their hobbies are what they love to do, if they want to major in it in school or even if they just want to work on it on the side like I am,” she said.

She said she hopes this book resonates with other people who struggle to pursue hobbies outside their career paths and encourages them to pursue them anyway, even if there will be backlash from people in their lives. Having more free time in her schedule at college has helped her to finish up the book, she said.

Unetich said this is the first of many books she hopes to publish throughout her life. She is also working on releasing a collection of essays that she wrote during her senior year of high school, a collection that she said she is submitting to Buzzsaw Magazine on campus.

Unetich said that she submitted “Look Both Ways” to Andrews McMeel Publishing on Feb. 7.

Freshman Katherine Urbano, who is good friends with Unetich, said she admires how Unetich makes time for things she cares about outside school.

“She’s just really focused on school,” Urbano said. “She’s a [biology] major, and that’s a lot of work. She’s really dedicated to school but then also having a way to enjoy writing like she does, which I really admire that.”

Urbano said she had no idea Unetich had been writing a book.

“I started screaming like ‘Oh my gosh, I didn’t even know about this. … Oh my gosh, this is so cool’ because it’s not like your friend your age just publishes a book,” Urbano said. “I feel like a proud mom.”

Freshman Taylor Callis, who is also friends with Unetich, said Unetich is someone with a positive outlook on life even when things get stressful.

“[She is] a very bright person overall. Even if something’s getting her down, she still tries to push through and keep everything positive,” Callis said.

Callis said that she knew Unetich writes poetry but was unaware that she was creating a book of her work.

“She told me she was writing poetry, but I didn’t know she was planning on publishing it,” Callis said. “Even then, I was still surprised because we didn’t really talk much before coming here, so I only knew her as the [biology] major, so it was a nice surprise.”

Callis said Unetich’s ability to publish a book unrelated to her career path has inspired her to look for hobbies outside her career, too.

“It inspired me to explore my interests outside my major,” she said. “Her book inspired me to push my limits outside, so I joined a few service clubs because that’s what I like to do, and I was going to focus on career-oriented clubs just to help me get experience. The book helped me realize I need something other than my career to keep going in life.”