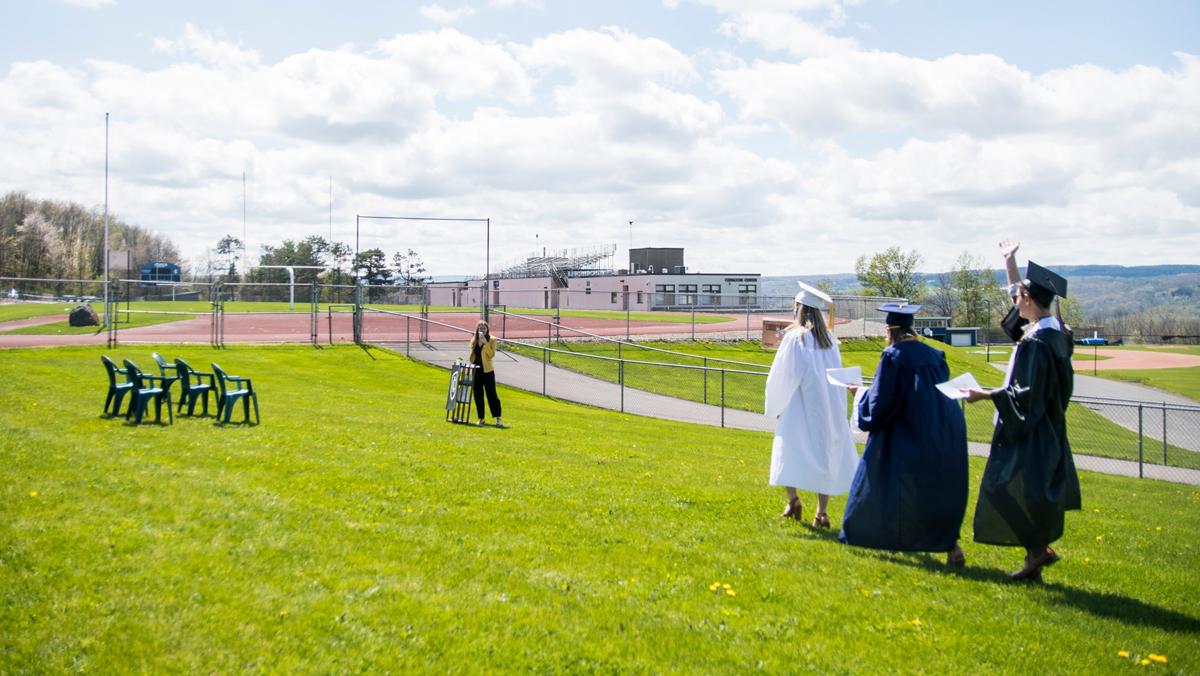 Butterfield Stadium was locked and the bleachers were empty May 16, the weekend of what would have been the Class of 2020 commencement at Ithaca College.

However, just outside the gates, a group of graduates had their own celebration in mind. Donning masks and high school graduation gowns, approximately a dozen soon-to-be graduates set up their own ceremony outside the stadium, complete with fake programs and diplomas.

Nora Vail ’20 and her housemates helped organize the gathering, including planning commencement speeches, arranging a photo shoot and making sure everyone involved had a cap and gown. Vail said while her graduation did not turn out how she imagined, the mock commencement was something she would never forget. 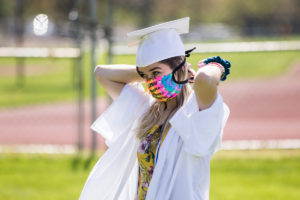 Nora Vail ’20 at a graduation celebration May 16. Kristen Harrison/The Ithacan

“It wasn’t the same, but at this point different was what we needed,” she said. “It was nice not to think about what was going on in the real world and make the best of the situation.”

Despite the change of plans, the college found a way to celebrate the Class of 2020. President Shirley M. Collado shared a video message with the campus community May 17 in which she officially conferred degrees. 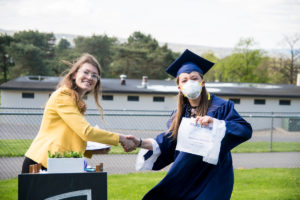 “I know that when you woke up this morning, this was supposed to be the day we celebrated one of your greatest milestones, in person, together,” Collado said in the video. “You’ve given us so much talent and gifts, things that we will be eternally grateful for, but I’m here to tell you that we’re with you. Your IC family is strong, and we could not be prouder.”

The celebration continued as residents of the Ithaca community also found ways to honor the seniors.

Vail and another student behind the mock commencement, Sarah Horbacewicz ’20, received a surprise when they went shopping for supplies in their gowns at Wegmans and Northside.

“If we couldn’t walk across the stage, we’d at least walk down a grocery aisle in our gowns,” Vail said.

While strangers congratulated them as they walked down the aisle, both Vail and Horbacewicz said they were shocked when Maria Cacciotti Salino, owner of Dolce Delight, a local bakery, offered to pay for their groceries. Vail said although the two initially refused, Salino was adamant, and they accepted her kind gesture. Horbacewicz said the entire experience was an odd but perfect way to sum up her time at the college.

“Pushing a cart full of champagne in a cap and gown and humming ‘Pomp and Circumstance’ was so fun,” Horbacewicz said. “There’s no place that I would rather celebrate than Wegmans, given the amount of time I’ve spent there in my four years at Ithaca College.” 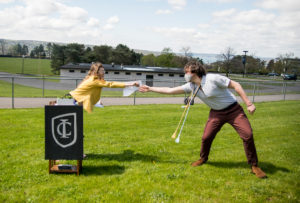 After shopping for supplies and holding the mock ceremony, the graduation ceremony concluded with a classic tradition: photos by the fountains.

Although the fountains and the pool were empty, Vail said it had rained the night before, leaving a puddle just big enough to splash in. She said everyone jumped in and played in the puddle, calling it “Senior Splash” in honor of the annual tradition with the same name.

Andrew Hallenberg ’20, who also attended the mock graduation, said the ceremony was an amazing time to celebrate with friends.

“It was something that may sound silly, but when you’re there and you’re surrounded by people you spent the last four years with and helped you become the person you are, you kind of forget all that,” he said. “In that moment, it didn’t matter if it was a real ceremony or a fake ceremony. It was just me and my friends celebrating all our hard work and that was really all that mattered.”

Some seniors who stayed in Ithaca after the college shifted to remote instruction did not have access to caps and gowns to take photos with. Hannah Titlebaum ’19, an admissions counselor at the college, offered to loan out her gown to some of this year’s seniors who did not have one. So far, she has given the gown to five students who wanted to be able to take graduation photos in their gowns.

“It’s really the least I could do,” Titlebaum said.  “All I have to do is pull it out of the closet, so I’m happy to be of help.”

Graduates who could not be in Ithaca on the original commencement weekend also found ways to celebrate.

Devon Stuart ’20, a graduate student, said she was shocked to wake up on the morning of May 16 to find her family planned a surprise graduation party at her home. Her mother gave a speech pretending to be president of the college and her sister pretended to be the class president. 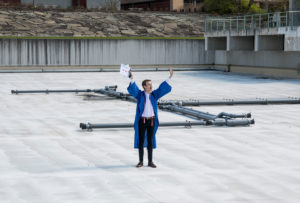 Sean Murphy ’20 stands in the fountains at a graduation celebration. Kristen Harrison/The Ithacan

“You can’t take back missing out on being in Ithaca for graduation,” she said. “But I think in some ways this was more special because it was the people who love me the most having to make it special for me.”

The biggest surprise of the day came when Stuart opened her “diploma” and found a marriage proposal from her boyfriend instead. Her sister captured the whole moment and posted the video on TikTok.

Stuart said even though her graduation did not turn out like she imagined, it was still an amazing day.

“At first I was so surprised by everything else going on that I didn’t even read the diploma, but then my whole family started freaking out,” she said. “When I read it I was bawling because I was so happy.”