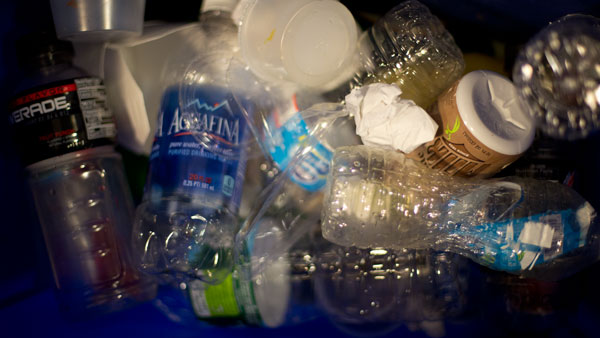 The petition, which was launched in January and addressed to President Tom Rochon, says plastic bags and water bottles are toxic to the environment, harm animals and create excessive waste. The Campus Store, Mac’s Convenience Store and Sub Connection are a few campus locations that sell plastic water bottles and use single-use bags. There are 51 drink-vending machines across campus, according to the Office of the Campus Center and Events Services, that sell single-use plastic water bottles.

Freshman Josh Kelly, president of IC Greens, said this ban would be a good direction for the college, which prides itself on being sustainably conscious.

“This isn’t a problem located in Ithaca College: this is a problem worldwide,” he said. “I believe, and students here at this college believe, that Ithaca needs to pull its weight and step up to the plate when it comes to sustainability and lead rather than lag behind.”

Kelly also said the administration should be more vocal about the impact of waste and about possible alternatives to single-use plastic bags and bottles.

Rochon was not available for comment on the topic. However, he said via email the college is currently in the advanced stages of a search to fill the new position of Energy Manager/Sustainability Coordinator.

“When we have an incumbent, I will ask the individual to look at the petition,” Rochon said.

Kelly, who has introduced a similar petition calling for the ban of plastic bags in his hometown of Waterford, Conn., said he was inspired to do this at the college while driving around in Waterford.

“Right by my house, there is a patch of land that has been for sale,” he said. “I stopped the car, and I counted how many plastic bags I could see just from my window. It was 30-something in this little quarter of acre plot of land. That made me really sad.”

Kelly said he decided a ban would be a financially viable option for the college. He also said a complete ban would be a better option than reducing plastic bag and bottle usage.

“While reducing is better than operating as we currently are, it only takes one plastic bag to suffocate an animal,” he said.

However, Marian Brown, special assistant for campus and community sustainability, said a total ban would be a premature move without proper dialogue and discussion.

“I freely admit I am not a fan of either disposable plastic shopping bags or disposable water bottles, but I do recognize that there are compelling reasons why those items exist,” she said.

David Prunty, director of campus center and events services, said the college recently entered into a seven-year contract with a new vending machine company. He said the company stocks machines based on purchased items.

“Petitions are always helpful to get a sense of people’s perspectives, but what drives business decisions are purchasing decisions, not petitions,” he said.

Lauren Rishe, a staff member at Penn State University, is one of the signatories of IC Greens’ petition. In her signature, Rishe said she is involved in a similar movement on her campus.

Sarina Katz, a senior at Penn State and president of the student group Eco Action, is spearheading this movement. Katz said while a ban was what the group originally had in mind, it has decided on short-term measures instead.

“We are working more on reducing use, and our university actually just started a new recycling program where you can recycle plastic bags on campus,” she said.

Meanwhile, Brown said students have an important role in reducing plastic waste on campus every day.

“If students tomorrow decided they wanted to see an end to bottled water sales on campus, all they have to do is stop buying water bottles on campus,” she said. “I guarantee that within short order, those bottle water products would disappear from store shelves, from the coolers on campus and from the vending machines, because they are looking for products that students would buy.”