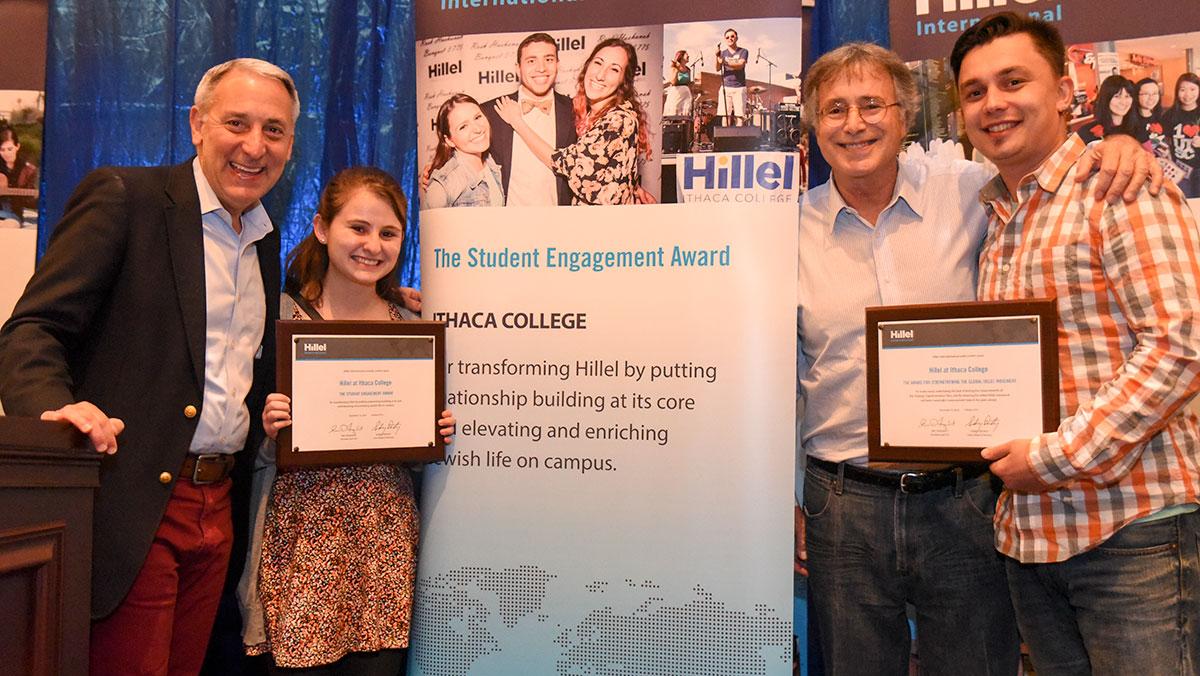 Only eight out of over 550 U.S. Hillel organizations win a Drive to Excellence Award at Hillel International: Global Assembly. For the first time, Ithaca College’s Hillel, the campus’ Jewish community, received the award in the Best Student Engagement category on Dec. 10, 2014.

Igor Khokhlov, the executive director of IC Hillel, said the award honors Hillel organizations that have focused on student engagement by employing a vigorous engagement tactic to develop a strong network among the Hillel and campus communities.

“This award recognizes a tectonic shift in our efforts to elevate the brand of IC Hillel and become an indispensable partner to the entire college community,” Khokhlov said. “We are committed to building an inclusive community, and many micro-communities to be precise — cultural, social, religious, educational, political. There are so many ways of being Jewish, and while one aspect of Judaism might work for one student, it will be totally irrelevant for another.”

To develop student engagement, the Hillel staff, student leaders, interns and fellows held one-on-one meetings with new members to determine what they felt was missing in the campus Hillel program.

Hillel now hosts more than a hundred initiatives each year, including FreshFest, a Welcome Back BBQ, Jewish Educational Series, Israel Film Festival and challah baking. The organization also sponsors an Inch-a-Thon event to raise money for people fighting cancer, as well as a social initiative called Coffee@Pub, at which Hillel buys students coffee for two hours on Thursdays.

“Hillel provides a constant stream of events and activities to not only connect Jewish students to Hillel, but to each other, which in turn creates a strong and positive community on our campus,” Cammy said.

Additionally, Hillel offers paid internships, such as the campus entrepreneur internship, to students who are willing to work with unengaged Jewish students. These interns build relationships with uninvolved students and broaden their social networks with the hope of furthering Jewish values in the context of their relationships. There are also four paid fellowship positions available to two Christian and two Jewish students to work on an Ask Big Questions program, which looks to bring students from all backgrounds together to engage in meaningful discussions. In addition, Hillel is working with the Office of Residential Life, the Office of Public Safety and Emergency Management and other community partners to launch an It’s On Us campaign to prevent sexual abuse on campus.

Freshman member Nalani Haueter said the availability of the organization’s student engagement interns and frequency of its campus events are considerably successful in engaging freshmen members who are less involved than upperclassmen members may be.

“Hillel board members and interns reach out to incoming freshmen both before the semester begins to invite students to FreshFest, our Jumpstart program and throughout the year to personally invite them to events,” Haueter said. “It’s those person-to-person conversations that have led me personally to be so involved.”

Another opportunity Hillel offers to Jewish students is the Taglit-Birthright trip to Israel that takes place over winter break. This year, 25 Hillel students joined with students from Hofstra University Hillel to embark on a 10-day trip beginning Jan. 4. The students spent time in Tel Aviv, Kibbutz Maagan by the Sea of Galilee, Jerusalem, and southern Israel, engaging in activities and discussions throughout the trip.

Both Cammy and Haueter attended the Birthright expedition.

“Having just returned from the trip, I had one of the best experiences of my life,” Cammy said. “Going with Ithaca College’s Hillel created lifelong bonds, between myself and the other IC students on the trip. We intend on maintaining these relationships and sharing our joint experiences with the rest of campus.”

Due to the positive feedback from students who have been a part of Birthright, Khokhlov said Hillel is opening registration on Feb. 3 for a summer trip for the first time. Interested students can register at freeisraeltrip.hillel.org.

“For Jewish people, travelling to Israel can be a very intimate, touching and emotionally powerful experience,” Khokhlov said.

Khokhlov said Hillel owes much of its success to its college partners, such as the Office of Student Engagement and Multicultural Affairs, the Student Government Association, the LGBT Center, the Jewish studies department, Residential Life, Campus Center and Event Services, dining services and the Roy H. Park School of Communications.

“The award is a tribute to our students who run the organization, all the way — bottom-up,” Khokhlov said. “It is also an award for the entire Ithaca College community as Hillel works to be an indispensable partner to the whole college, not just Jewish students.”

Cammy said he is happy to have a religious organization on campus where he feels accepted.

“The best part of Hillel is having a safe place that is open and welcoming to all Jewish students regardless of religious views or practice,” Cammy said. “In a world where Jews are still being specifically and violently targeted, it is calming to know that there is a place of true acceptance on Ithaca College’s campus.”