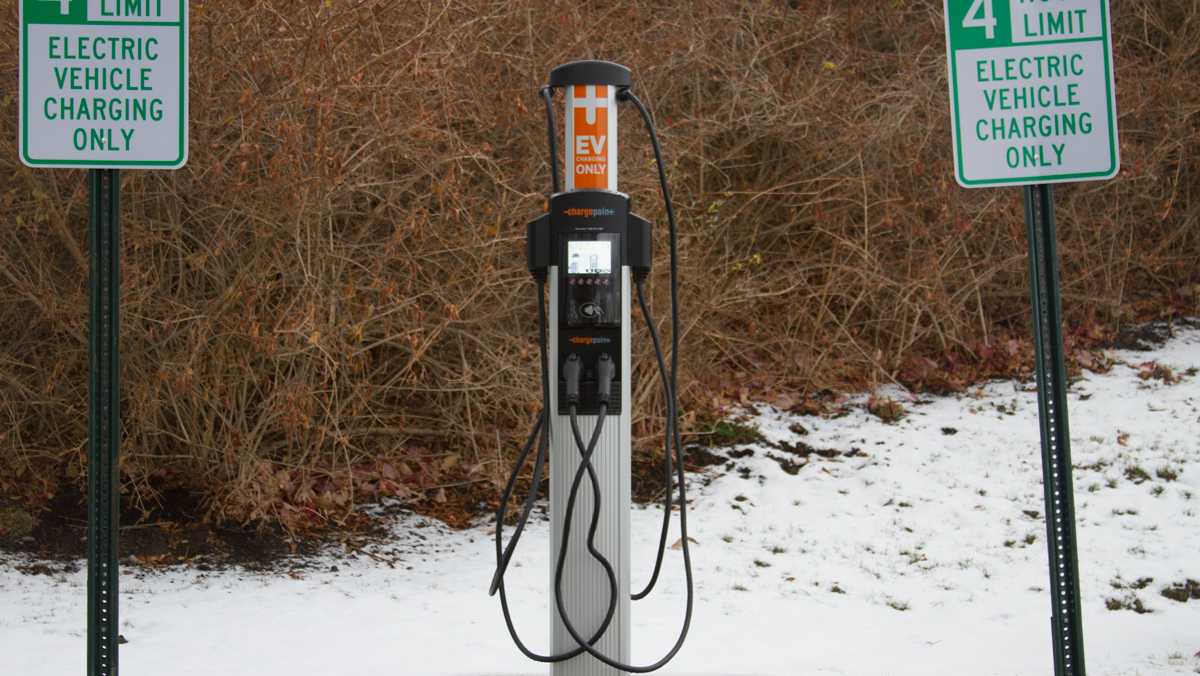 Ithaca College has received a grant from New York State Energy Research and Development Authority to install a charging station on campus for electric vehicles.

ChargePoint, the installation company, completed the installation Dec. 8. The station is capable of charging up to two cars at a time and is placed in the Visitor’s Lot located off the main Campus Road, Greg Lischke, director of energy management and sustainability, said.

The stations are capable of charging electric vehicles for four hours, a time that is based on the college’s current parking policy limit, he said. NYSERDA is sponsoring the installation of 11 stations in Tompkins County as the second phase of a statewide initiative to help boost the use of electric vehicles. As a result of the grant, which is valued at approximately $10,000, there is no immediate cost to the college for the device, Lischke said.

Parking Services supervisor Carl Cohen said he, along with the Parking Policy Advisory Committee, decided to place the stations in the Visitor’s Lot to not only increase the number of electric vehicles on campus, but to also be an accessible resource for those traveling from a distance.

“The idea was that one, it’s at the entrance to campus, and two, that at least for the time being, that the vast majority of people we think might be using it are actually visitors to the campus,” Cohen said.

The college does not have data regarding how many members of the campus community have electric vehicles, but it is not a large number, Cohen said. Lischke said he estimated that around three or four of these vehicles are registered on campus. Therefore, if the stations were placed in another lot, they would be taking parking spots away from members of the campus community, since the majority of them do not have cars compatible with the charging stations, Cohen said.

“Our hope is, once these are here and we grow the program, that we may encourage more people to choose an alternative fuel vehicle,” he said.

Kathryn Caldwell, assistant professor in the Department of Psychology, drives her electric Nissan Leaf to and from campus. She said that the car, which she bought used, can travel about 80 miles at a time, but that traveling up the steep hills in Ithaca can often take off around 20 miles from the charge. For this reason, she has a difficult time traveling long distances, she said.

“It takes care of pretty much all my in-town needs,” she said. “The only trick is, of course, out of town.”

She said it is difficult to charge her car when she is commuting to and from work, so it would be beneficial to have one on campus. The closest station is about a mile from campus.

“Even though I don’t know if I would always need it, it would be nice to have it here because it can extend my driving range if I had other things I need to do in the evening,” Caldwell said.

Caldwell currently parks her car in U-Lot, which is near Williams Hall, where her office is located. She said she is not sure she would park in the Visitor’s Lot, which is across campus.

“It would probably depend on my needs for the day,” she said. “If I don’t really have a real need, I probably wouldn’t just because it’s more convenient over here. But I’m super excited that they’re working on getting that in there.”

Lischke said the college plans to install another electric vehicle charging station in the Athletics and Events Center parking lot during summer 2018.

Although there is a charging station located near the Circle Apartments, it is not operable, Lischke said.

Cohen said that he is excited about the installation of the stations and that he does not anticipate many difficulties with the technology. Still, he said, he is providing training to his student staff regarding the use of the stations.

“Anything that we can do as a campus to encourage people using more sustainable forms of transportation, I’m 100 percent behind,” Cohen said.