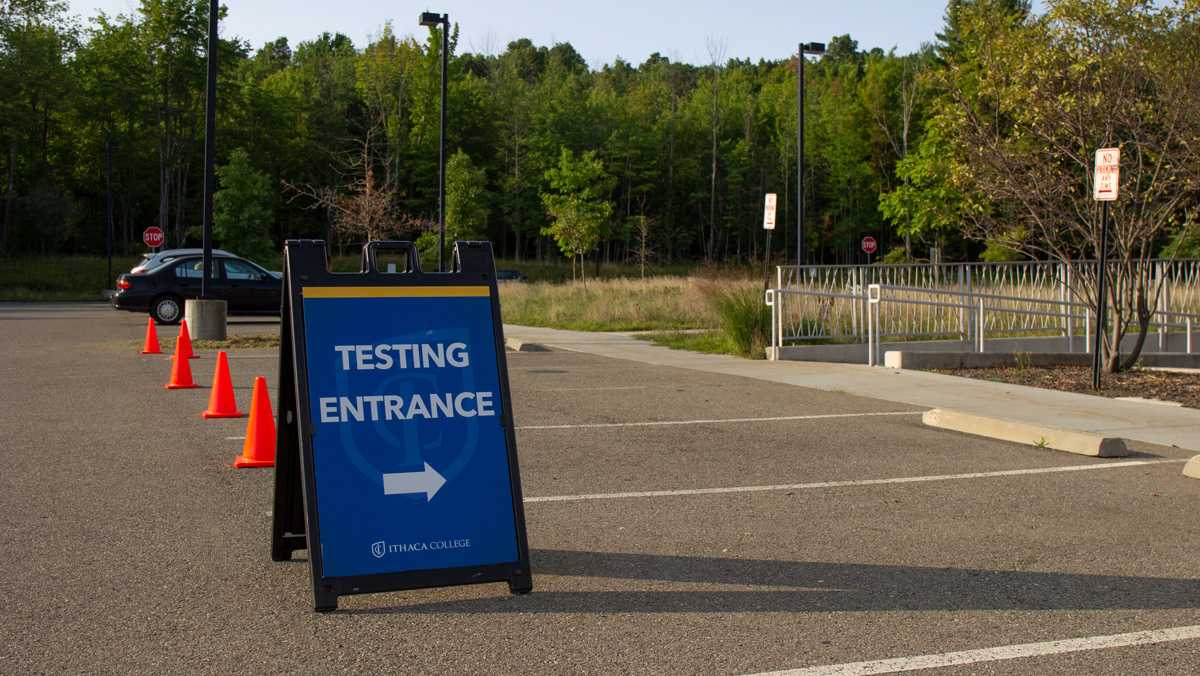 Ash Bailot/The Ithacan
Even though Ithaca College is remote for the semester, approximately 1,400 students, faculty and staff pass through the Athletics and Events Center every week to get tested for COVID-19.
By Syd Pierre — Staff Writer
Published: November 2, 2020

Even though Ithaca College is remote for the semester, approximately 1,400 students, faculty and staff pass through the Athletics and Events Center every week to get tested for COVID-19.

The college has partnered with Cayuga Medical Center (CMC) and the Tompkins County Health Department to offer COVID-19 testing for students, faculty and staff who access campus, as well as students living off campus.

As of Nov. 2, the college has administered 13,424 tests since Aug. 14 to members of the campus community, according to the COVID dashboard. Out of the number of tests administered, 34 have been positive cases. The tests are done via nasopharyngeal swab at the college’s A&E Center and then transported to CMC for testing. Christina Moylan, director of public health emergency preparedness, said that the Cayuga Health System began offering the saliva-based test Oct. 20.

“This is a small pilot however will be scaled up significantly this week during testing and in future weeks,” Moylan said.

Universities across the country have begun to roll out saliva-based testing, according to The Scientist. Studies have found that saliva-based tests have yielded mixed results compared to nasopharyngeal swabs. However, the University of South Carolina, an institution that uses the saliva test, found that even though this method may be less sensitive than the nasopharyngeal swabs, testing with saliva requires fewer supplies, and people are more likely to receive repeat tests if they just have to spit in a cup, according to The Scientist.

Working with CMC, Ithaca College is administering surveillance-style testing on Tuesdays and Wednesdays from 8 a.m to 4 p.m at the A&E Center. Surveillance-style testing involves only testing individuals who are asymptomatic. This style of testing helps the college get a better understanding of the number of positive and negative cases on campus. Cornell University is also relying on surveillance testing and from Oct. 23 to 29, Cornell administered 34,852 tests.

Grace Weisbecker, operations manager of COVID-19 testing at CMC, said that there are typically six staff members from CMC on–site at the college: three registering individuals for tests and three administering the tests.

Dillon Shaffer, site lead for the COVID department at CMC, said one of the biggest challenges is that the testing site at the college is not a permanent testing location. Instead, the site at the A&E Center is set up and torn down every week. This requires a larger amount of preparation compared to the other designated testing sites run by CMC, like The Shops at Ithaca Mall and testing done at Cornell.

Shaffer said that he starts planning for the coming week on Friday when the schedule for who will be working at every location is released.

Another challenge is the number of staff members CMC has available every week, a number that varies every week. The schedules can change over the weekend, leading to workers being shifted around, Shaffer said.

“Being flexible with who could show up on any given day on either Tuesday or Wednesday, [it] really changes quite a bit just because we are trying to staff so many different locations,” Shaffer said. “Being able to kind of predict any of those challenges that might come with staffing and packing for those because everybody has their own separate N95 mask. Everybody has their own size of scrubs and glove preference.”

Ari Kissiloff, assistant professor in the Ithaca College Department of Strategic Communication, said that he had been on campus occasionally to quickly grab things from his office or shoot sample videos for his students, but, because of how infrequently he went to campus, he had never been tested at the college until the middle of September.

Kissiloff said that he had been tested two or three times at the sampling site at the Ithaca Mall, but his experience getting tested on campus was noticeably better.

Weisbecker oversees all of the COVID-19 testing operations for the CMC but said she has also administered a number of tests.

“Obviously, you’re putting something way up somebody’s nose, so most people are not really a fan of it, and a lot of people are scared of it the first couple of times they do it,” Weisbecker said. “But the big thing I find is trying to reassure people it’s really not as bad as everybody says.”

Similarly, Shaffer said he has subbed in for any position that needs a staffer at the test site, including registration and administering tests.

“I’ve done basically every job that there is, so I can fill in wherever is needed,” Shaffer said. “The site lead position is just so that [staffers] can ask me questions. So if they’re running into problems with registration or if they have someone that has a very unique situation, then I can try and mitigate that the best that I can.”

Senior Lochlyn Hejl is living on campus in the Circle Apartments and said that she usually gets tested on Tuesdays when she drives down to the A&E Center with her roommate.

Hejl said that because of her hands-on major — clinical health studies — and how closely she interacts with other students in her classes, she is glad the testing is done on a weekly basis.

“It’s really important to me that everyone is getting tested regularly and is safe so we can continue to interact and take the classes in the format that they need to be,” Hejl said. “And hopefully, when everyone comes back in the spring — if that is what happens —  everyone will continue to comply with that testing protocol so that we can all keep each other safe.”

Shaffer said that while his job is challenging, he thinks that the weekly testing allows the small number of students who are taking classes on campus to feel safe.

“It’s a long day on my feet,” Shaffer said. “I’m tired at the end of the day. I am not making a whole lot of friends by sticking a swab into their nose. But ultimately, [students] are able to continue to learn in person. So I think that’s the positive that comes out of it.”