Elias Olsen/The Ithacan
Extremely cold weather impacted the Ithaca area this week, causing some students to become distraught when the college did not cancel classes Jan. 31 when a weather advisory was in effect.
By Krissy Waite — Assistant News Editor
Published: February 2, 2019

Ithaca College delayed classes due to a severe wind chill warning Jan. 31. However, many students were hoping for classes to be cancelled altogether, so some decided to express their disdain with the news through memes and tweets.

Classes were delayed until 10:50 a.m. and all office hours were delayed until 10:30 a.m. According to the National Weather Service, the windchill in Ithaca reached a low of negative 28 degrees Fahrenheit at 2:56 a.m. Jan. 31 and stayed in the negatives throughout the entire day. The wind chill advisory was in effect from 2 p.m. Jan. 30 to 6 p.m. Jan 31. Several local school districts including Dryden, Ithaca and Lansing, closed for the day.

Students at the college took to Twitter and Instagram to voice their concerns the night before the delay and express their frustrations with the college for deciding to hold classes.

Ithaca College tweeted Jan. 30, “A wind chill warning has been issued for the Ithaca area. Temps could feel 20 to 30 degrees below zero. Please remember to be safe and use your best judgment while outdoors.”

A windchill warning has been issued for the Ithaca area. Temps could feel 20 to 30 degrees below zero. Please remember to be safe and use your best judgement while outdoors. More info on being prepared for cold weather can be found here: https://t.co/DLsqA7KCtm pic.twitter.com/m4fwEIgFvq

Senior Hannah Crisafulli replied to the college’s tweet, stating that holding classes would be classist because not everyone may have the ability to buy sufficient winter gear.

“Cancel classes. Assuming that all students can afford full-coverage winter wear is classist,” she wrote, “Saying to ‘use your judgment’ while outside is, too. Anyone on academic probation can lose points for missing class tomorrow (it’s only the second week of the semester, and most professors have a two-absences per course policy), which could mean that they lose their scholarships.”

saying to “use your judgement” while outside is, too. anyone on academic probation can lose points for missing class tomorrow (it’s only the second week of the semester, and most professors have a two-absences per course policy), which could mean that they lose their scholarships

Another student, junior Alex Gray, replied to the same tweet claiming that holding classes during the cold temperatures would put people with disabilities at a disadvantage.

“It’s also ableist because people with disabilities may have a(n even) harder time getting around which could be dangerous, especially if people have to travel long distances across campus!” Gray said via Twitter.

It's also ableist because people with disabilities may have a(n even) harder time getting around which could be dangerous, especially if people have to travel long distances across campus!

Sophomore Jake Bella created an online petition Jan. 30 that received 5,284 signatures as of Feb. 2. The petition stated, “It’s supossed [sic] to feel from anywhere in the -20s to the -40s in Ithaca, NY tomorrow. The local public schools have already canceled class. As students that have to walk outside to get to class we feel it is a danger to our well-being to have class tomorrow, January 31st, 2019.”

After the college announced the delay on Instagram, students replied with displeasure.

“I’m not paying $60,000 a year to this school to have them completely disregard my well-being and safety when there’s a weather advisory,” she commented. “Shame on you.”

Junior Scott Bruce posted a meme to the Facebook Page “Overheard at IC” that criticized the college’s choice to hold classes and referenced the college’s original post on Twitter about staying warm. Many students also made memes circulated over social media mocking the college’s decision. 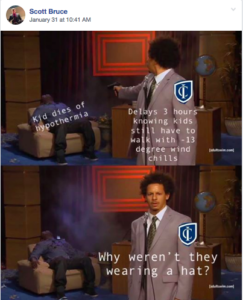 Freshman Julien Sobel created a Facebook event for Thursday titled “Naruto run across campus to keep warm.” The details of the event read “Naruto running will make you more aerodynamic, making it so you don’t need to spend as much time outside. It also activates your muscles, making your body generate heat.”

Dave Maley, public relations officer at the college, wrote via email that the decision about what to do concerning the weather took great consideration and two separate meetings between several members of the college’s Core Emergency Response Team (CERT).

The first CERT meeting to discuss the windchill warning took place at 4 p.m. Jan. 30, he said. The team decided it could not make any decisions about the following day because too much could change in the following 12 hours. The team met again at 5 a.m. Jan. 31 and concluded that with the negative 20 to 30 windchill temperatures not letting up until later in the day, the best option would be to delay classes.

“The consensus was that it was prudent to delay the opening of offices and the start of classes until 10:30 and 10:50 a.m., respectively, since by then the temperatures would be within ranges that can happen more typically during winter in Ithaca, though still quite cold,” Maley said.

Maley said Ernie McClatchie, executive director in the Department of Facilities, Grounds and Transportation, said that there would be no icy or snowy precipitation that would make travel, on foot or via other forms of transportation, difficult.

He also cited the Ithaca College Policy Manual, which states “Weather conditions, no matter how extreme, normally will not close the College when classes are in session.”

Maley also wanted to specify that no students reported weather–related health issues to the Hammond Health Center on Jan. 31. Maley said these decisions are always made with thoughtful consideration.

“Decisions about canceling or delaying classes, or keeping to the normal schedule, are always made after thoughtful consideration and with all the information possible, so that we can continue to best serve our students,” he said.

Ithaca College students learned how to survive outside during a New York winter in a talk by the founder of Primitive Pursuits, a local nature education program.