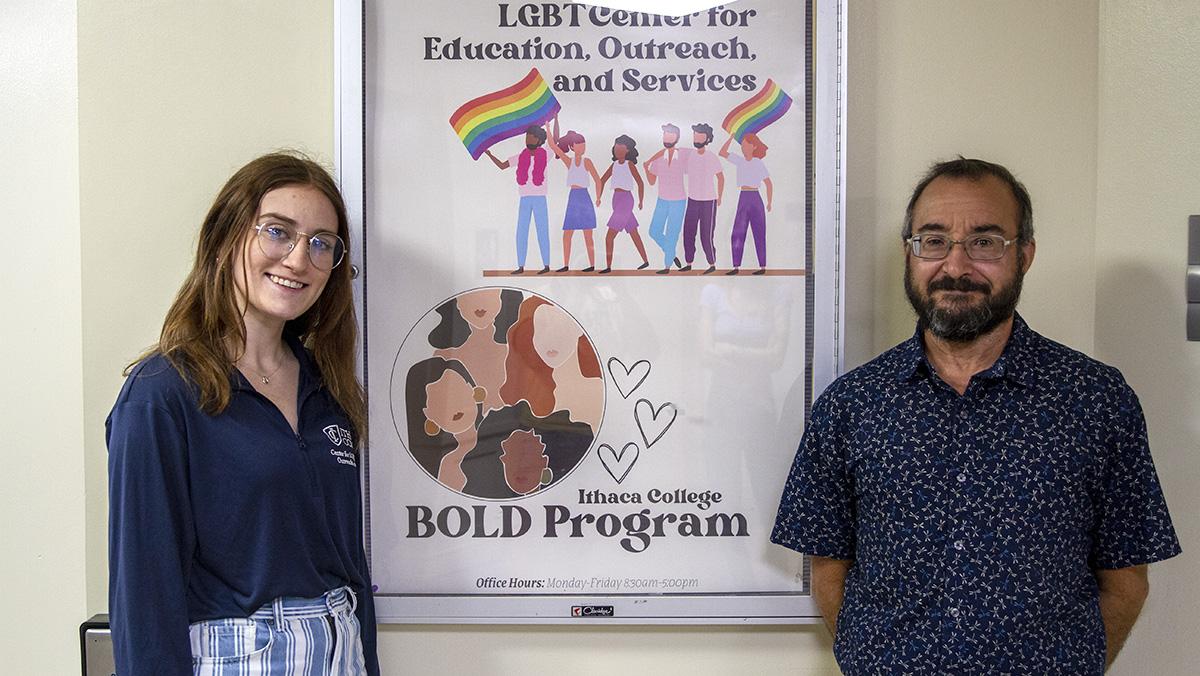 Known for its LGBTQ+ resources and community by students and organizations like Campus Pride, Ithaca College continues to invest in that reputation by launching the IC Pride Fellowship in Fall 2022. The first fellow, Grace Dosdall, joined the campus community July 5.

The fellowship is a two-year position for recent college graduates to learn and work in the fields of LGBTQ+ campus resource professionals, higher education and student affairs. Dosdall works alongside Luca Maurer, director of the Center for LGBT Education, Outreach and Services, to educate the campus community on LGBTQ+ issues, plan events, collaborate with other campus organizations and communicate with LGBTQ+ students, among other responsibilities.

Dosdall said one unique aspect of the fellowship is that the position will look different depending on the fellow and what they want it to be.

“Honestly, it’s weird to be at an institution where the answer to my question of ‘can we do this?’ is either ‘yes’ or ‘we already have it,’” Dosdall said. “So, not having to fight is a little weird for me, but trying to navigate a supportive institution has been really fun and exciting.”

In 2020, Dosdall graduated from Concordia College in Moorhead, Minnesota with a Bachelor of Arts in English writing. They then proceeded to Buffalo State College and graduated in May as a Master of Science in higher education and student affairs administration before applying to the IC Pride Fellowship.

Maurer said that selecting Dosdall as the fellow was the last piece in a year-long plan. He said that in September 2021, Rosanno Ferro, former vice president for student affairs and campus life, asked him to draft a vision for the fellowship — an idea that came from former President Shirley M. Collado during her tenure. Later, in October 2021, then-interim President La Jerne Cornish and the President’s Cabinet reaffirmed Collado’s commitment to bringing the fellowship to fruition. Shortly after Spring Break in 2022, the search for applicants began.

“This is an opportunity for the person in this role to learn and grow and explore their existing academic and professional interests,” Maurer said. “And it’s a way that Ithaca College can distinguish itself and say, ‘you know, in the past, we’ve been recognized as one of the most LGBTQ-friendly colleges in the nation, and we want to raise the bar higher.’”

The college was named in the 2022 Best of the Best LGBTQ-Friendly Colleges and Universities List by Campus Pride, a reliable resource for LGBTQ+ inclusion and safety on college campuses. The Campus Pride Index measures how LGBTQ-friendly each campus is within the United States. The college received a five-out-of-five rating based on policies, practices and programs like the LGBT Center.

The IC Pride Fellowship is one of the first of its kind in the country according to the college’s website. Senior Connor Watson said he hopes the college can serve as a model for other institutions to follow.

“A lot of colleges and universities are kind of dropping the ball on LGBT outreach,” Watson said. “I don’t mean that in a negative sense. I just mean, I think Ithaca does a lot more than other universities do, and this fellowship is a great way to prepare other individuals to take the knowledge from Ithaca [College] and extend it outward into their respective institutions.”

Watson is a student leader at the LGBT Center and said he was one of the students involved in interviewing Dosdall.

“When it’s something that is as student-facing as this fellowship role, I really believe that student input is most important,” Watson said. “Students, especially queer students, need … to feel heard and respected by those individuals. … I think Grace did a wonderful job at answering my questions and taking student input into consideration. I won’t get into too many details, but Grace was an obvious choice from my perspective.”

During the fellow hiring process, junior Ash Plummer also participated in interviewing the final candidates. They said they are excited to have a queer role model on campus that is close in age to the students, but has already graduated college and has professional and real-world experience.

“I was very pleased when asking about programming and accessibility … that Grace had a lot of great answers,” Plummer said. “Specifically for the LGBTQ community, accessibility is a big topic of conversation and [Dosdall] had a lot of good examples of how they included accessible features in past programming at their undergrad and grad school, which was great to hear.”

Plummer said if students have an idea about how queer life on campus can be safer or more accessible, Maurer will make it happen. Plummer said they are helping to lead a new peer mentorship program for LGBTQ+ students starting this semester.

“Since Grace has been here, the center has been organized and everything’s looking great,” Plummer said. “I feel like I’ve been able to focus on [my own projects] during my work at the LGBT Center because of the extra help.”

While Plummer works on the peer mentorship program, Watson said he is excited to work with Maurer and Dosdall to get REQONCILE up and running again, which is an informal, interfaith discussion group started during the 2021–22 academic year for LGBTQ+ students to talk about their religious and sexual identities.

Both Dosdall and Maurer said that while identity-based centers and the identity-focused work they do are incredibly important, having queer people in all spaces of higher education and beyond are essential.

“Do I want more LGBTQ students to go into specifically LGBTQ-centered work in higher education?” Maurer said. “Yes. And I also want more gay accountants and more trans culinary artists. … For far too long, LGBTQ students haven’t been able to aspire untethered, because they have been fighting for their basic right to exist. … I want them to be able to aspire to be whoever they are and do whatever they want. And for me, that’s what this work is all about.”