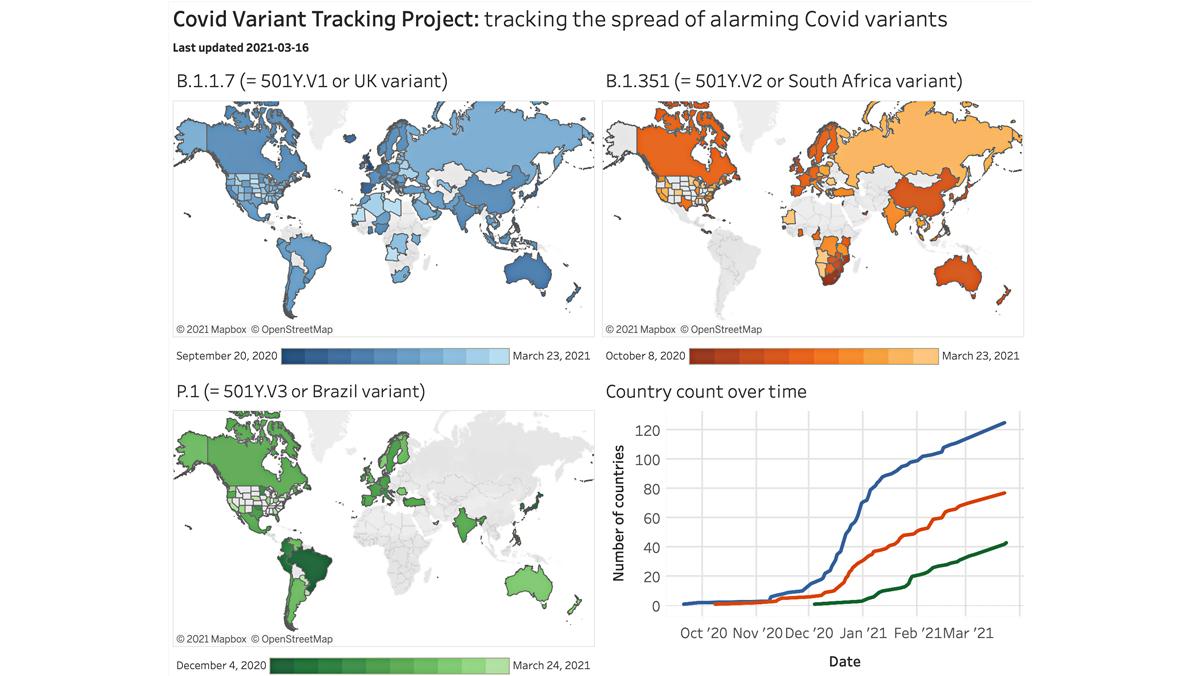 Courtesy of Brooks Miner
Brooks Miner, assistant professor in the Department of Biology, helped create a project that tracks the spread of COVID-19 variants and when they were first detected in countries around the world.
By Makayla Carozzolo — Staff Writer
Published: April 8, 2021

An Ithaca College professor helped create a project that tracks the spread of COVID-19 variants and when they were first detected in countries around the world.

Brooks Miner, assistant professor in the Department of Biology, helped create the Covid Variant Tracking Project. Miner is working on this project with Mridul Thomas, ecologist in the Department F.-A. Forel for Environmental and Aquatic Sciences at the University of Geneva in Switzerland. The project currently tracks the initial date of detection of the U.K., South Africa and Brazil variants in the countries they have been found in.

Miner said he initially launched the project with a single variant map Dec. 29, 2020. He said he used winter break to develop an interactive map of the locations of COVID-19 variants around the world. He said Thomas joined him shortly after the first map. They released an updated version of the data dashboard with the three variant tracking maps Jan. 20.

Miner said these three variants are being tracked because he finds them concerning. The Centers for Disease Control and Prevention (CDC) has classified these three variants as “variants of concern” in the United States. Miner said he would like to eventually change the scale on the maps from date of detection to prevalence and add other variants as they become more prominent. He said he and Thomas want to be cautious in adding new variants to the tracker and make sure there is scientific consensus before doing so. The CDC has labeled the New York City variant a “variant of interest” and the California variant a “variant of concern.”

Miner said he started this project to do something beneficial over winter break. He started working with Tableau, a visual data analysis platform, in summer 2020 and put his practices to use with this project. He said there was not an organized program of genomic surveillance — checking a randomly selected proportion of people for variants — at the national level in the United States.

Since Miner and Thomas are both in the ecology field, they said they are able to analyze the data and construct it in a way that is accessible to the public.

“It’s not something that would mean that I would make any strong claims of expertise, but it means that I’m able to evaluate and identify flaws in reasoning,” Thomas said. “Which is what I try to write about because the epidemiologists [have] done wonderful work as a community, but they’ve also had their blind spots and made their mistakes as well.”

Miner said the data used in the project comes from Nextstrain, a website that provides current data on evolving pathogen populations, and PANGO lineages, another website that follows the lineages of the COVID-19 virus. He said that each of these websites uses different methodologies to interpret and analyze the data, so it is reassuring to use corresponding data from both. He said that he trusts data from these outlets because the scientists involved are respected in their field and have published peer–reviewed articles.

Thomas said that prior to joining this project, he would write short explanations of scientific findings related to COVID-19 for friends and family, so he said this was another way to contribute to the public’s understanding.

Miner said that when the project started, he and Thomas spent a week straight working on it in January. Now he said they spend a few hours a week on the website to update it with relevant information. Miner said he wishes he could spend more time on the project, but it is difficult to find time during the semester.

Neither has gotten students involved. Miner said he did not do this because he does not know the longevity of the project.

“We kind of kept expecting that we’d wake up one morning and find that The New York Times or Johns Hopkins University, that has a really great dashboard for COVID tracker, like that somebody would have built a coronavirus variant tracker that would, or The [COVID-19] Tracking Project, which is something that The Atlantic started,” Miner said. “We’re just like, ‘Somebody, this is so important, like somebody’s going to build something like this that’s similar but basically better than ours.’”

Christina Moylan, director of Public Health Emergency Preparedness, said Ithaca College has not been notified by the TCHD or the state that one of these variants was found in the college’s samples. She said the college does not have a specific plan regarding these three variants.

Moylan said there would not be a different approach to isolation and quarantining, but the contact tracing process would go to a heightened level. She said the detection of these three variants in Tompkins County serves as a reminder to the campus community about traveling, testing, wearing masks, social distancing and following all of the recommended public health practices.

“It hasn’t changed how we are doing anything right now because the public health measures and protocols that are in place are in place for a reason and work whether we are talking about traditional [COVID-19] versus the variant [COVID-19],” Moylan said.

Students must be vaccinated to return to campus for Fall 2021