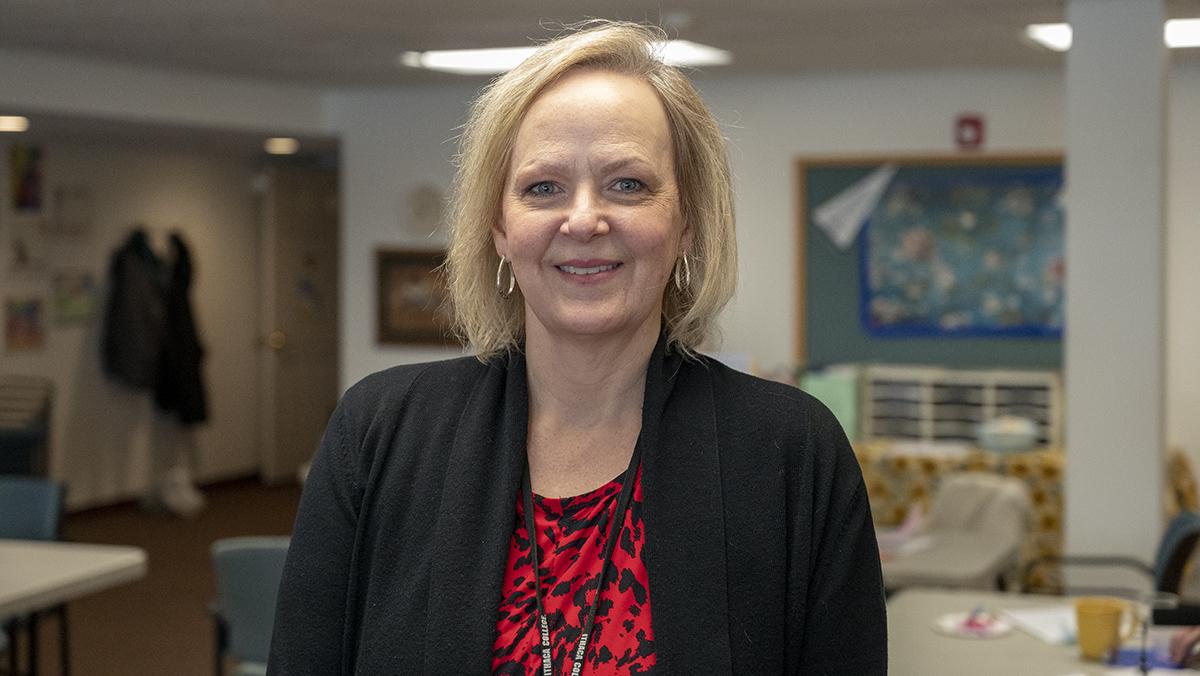 Shannon L. Scott, assistant professor in the Department of Occupational Therapy, envisioned a program that would give her graduate students an opportunity for hands-on work and offer valuable therapy to community members. As a result, the “Upper Extremity Motor Recovery Boot Camp” pilot was born.

More than 795,000 people in the U.S. have a stroke per year, according to the Centers for Disease Control and Prevention (CDC). The program — offered from Dec. 11 to 12, 2021 — was a first attempt at what could be a recurring event for the Ithaca community in the future. The program was led by Scott, Mindy Cozzolino, associate professor in the Department of Occupational Therapy, and 20 Ithaca College Occupational Therapy [ICOT] graduate students. The program, held at the Center for Life Skills at Longview in Ithaca, benefited six stroke victims from the Ithaca community by providing therapy methods to help improve function for those community members in a real-world setting.

A full constraint-induced movement therapy (CIMT) program is an intensive two–week, six hours per day program; something that is difficult to implement in traditional rehabilitation settings due to its intensity. The bootcamp followed a modified version of the therapy that took place for four and five hours over the program’s two days.

Scott said that even long after a person has suffered a stroke, which occurs when blood flow to the brain is blocked, they can still build new motor pathways in the central nervous system through using stroke-affected limbs in functional activities — something the CIMT hopes to tackle.

“You’re basically quieting down that side of the brain … and shutting that off, and forcing them to use the side that is involved,” Scott said. “I really wanted to provide some kind of an opportunity where students could actually engage in the intervention itself. [Then they can] use the intervention to develop knowledge, develop skills, enhance their confidence [and] in being able to implement that … be more apt to use it in practice.”

Working in groups of three or four to assist a participant, the students used modified CIMT, in which the participant’s unaffected arm and hand was restrained. The students then had them participate in activities that focused on intensive use of the affected part of their body, including strengthening with therapy balls and stroke rehabilitation tools. Other activities focused more on everyday skills, including making meals like pizza and tossed salad, painting, playing games, and cleaning.

Mitchell Raymond, who participated in the bootcamp, suffered a hemorrhagic stroke at age six that disabled him from opening his hand. A physical therapist himself, he was not only able to benefit from the treatment but also able to help the students along in the process.

“I personally as a stroke survivor would hop on board every time they provide [the bootcamp],” Raymond said. “Both for my teaching of the students involved as well as my own benefit from use of my right upper extremity.”

Rachel Valentino is one of the graduate students that participated in the program. She said it was really valuable because of how real it felt, making her and the other OT students think on the spot.

“Specifically for my client, after the first day, his wife or girlfriend came back and was like, ‘oh my god, you guys worked him so well, he feels like he’s actually getting progress and reaching his goals and everything,” Valentino said. ”Obviously, we wish we had a longer time with them, but I think everyone enjoyed it.”

Having gone into the field to help those who had suffered strokes, she said that she hopes the program evolves as time goes on.

“I hope in the future, it becomes a bigger thing,” Valentino said. “People deserve it”.

This is what Scott is hoping to see too. She said the weekend and the data gathered in it from surveys, feedback and observation will help the department decide how to move forward with future programming.

“I would like it to be offered as a week-long program where students at different levels can get involved so it’s not just our graduate students,” Scott said. “We’re even talking about the thought of looking at can it be an interprofessional opportunity where we can have students from other disciplines like physical therapy involved as well, so that the students have an opportunity for interprofessional education.”

For individuals like Raymond, the benefits of the program are undeniable; they offer invaluable support to a community in need.

“Don’t give up,” Raymond said. “Find support. You need to have a support network. The more people are alone post-stroke, the less likely they are to improve. And every opportunity that they get to do something like this, if they have upper extremity involvement, every opportunity they have to get into a program like the Center for Life Skills, like the CIMT program, they need to hop on it and ride that wave as much as possible. Because it helps, it really does.”

Centers for Disease Control and PreventionDepartment of Occupational Therapystroke victims