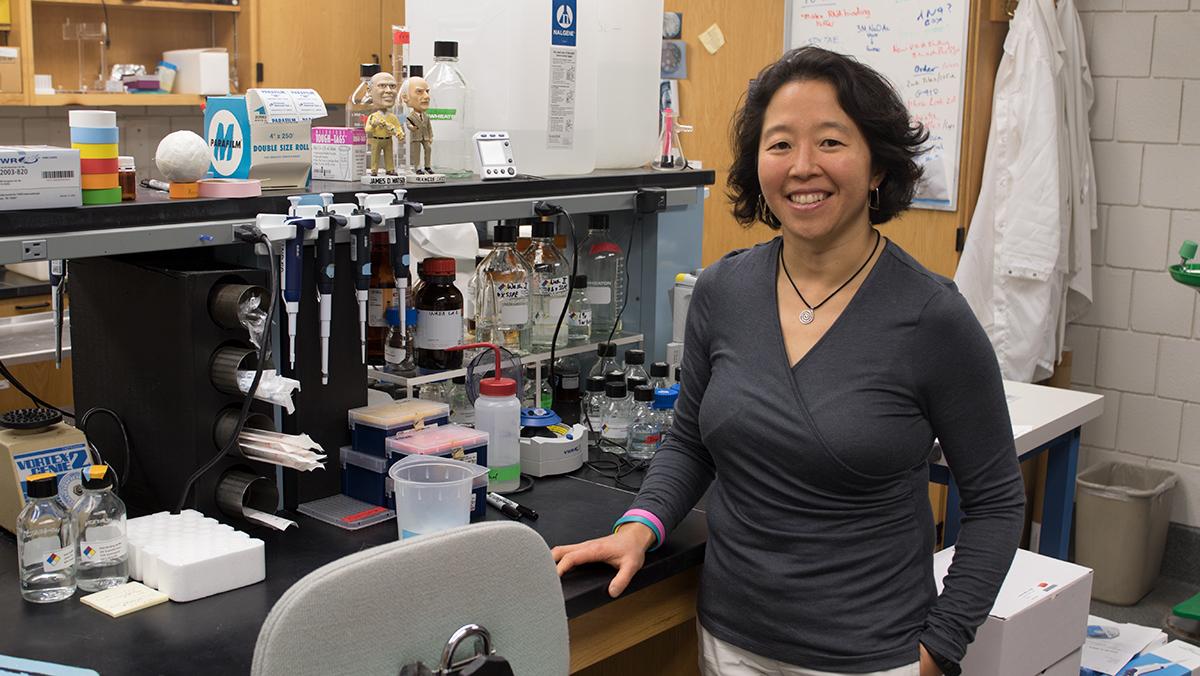 Connor Lange/The Ithacan
Maki Inada, associate professor in the Department of Biology, led her team of three, at the time, undergraduate students to examine gene expression through experimenting with yeast. Inada said the data collected shows a new and unusual mechanism for gene regulation, and though they don’t know directly what it means, it opens up avenues for other researchers to explore.
By Sierra Guardiola — Staff Writer
Published: November 17, 2016

Three Ithaca College graduates and one professor have researched a surprising new way in which genes are turned on and off, leading to their work’s being published Nov. 2.

Maki Inada, associate professor in the Department of Biology, led her team of three, at the time, undergraduate students — Robert Nichols ’14, Ruby Benn ’15 and Reyal Hoxie ’15 — to examine gene expression through experimenting with yeast. Initially, the goal was to examine how the enzyme that copies DNA was affected, what genes would be represented and how gene splicing would be altered. However, the team’s research led it to an unexpected discovery, warranting its work being published in the Nucleic Acids Research journal, part of the Oxford University Press Journals network.

Gene expression refers to how a person’s cells know how to represent characteristics so that they can perform different functions within the body. For example, a skin cell is different from a lung cell because of which genes are expressed.

In a process integral to how the body functions, an enzyme must copy DNA into RNA. The team was interested in the enzyme that performs this function, which is called RNA Polymerase II. They made mutations to this enzyme in yeast so that when the DNA was transcribed to RNA, they could see how gene expression in the genes of that cell would change, Inada said. The yeast was used since it is a model organism, and they could take what they observed in a single-cell organism and apply it to humans, she said.

The team originally hoped to see how mutations would affect splicing, which is when sequences of RNA are removed from the copied sequence, Inada said. However, the team said it was surprised when it got results and did not see any effects on splicing.

Instead, Nichols said that because of the mutations they made, the genes in the cell became loosely packed, turning on genes only in the ends of chromosomes. Therefore, gene expression is not completely altered by changing the enzyme used to copy DNA, with respect to splicing. Large effects on gene expression were only seen near the ends of the chromosomes, also known as telomeres. They still do not know why only the ends were affected, though, Nichols said. Data from the collaborators at the University of California, San Francisco, helped to confirm the evidence that the team at the college found, Nichols said.

“We drew an interesting connection that wasn’t necessarily thought of before,” Nichols said.

One of the most fundamental questions in molecular biology is how cells determine what genes to represent. Inada said the data collected shows a new and unusual mechanism for gene regulation, and though they don’t know directly what it means, it opens up avenues for other researchers to explore.

Nichols, currently a graduate student at the University of California, Berkeley, said he began working in Inada’s research lab during his freshman year at the college.

Doing this research is what made Nichols decide he wanted to pursue a Ph.D. in molecular biology, he said.

“Science is always a love-hate thing when it doesn’t work, but when it does pan out, it’s amazing,” Nichols said.

Benn, currently a graduate student at the Indiana University School of Medicine, said she became involved in Inada’s lab after taking biology and chemistry classes with her. Benn joined the team once research had already begun, so her first job was to validate and analyze the data that had been collected so far.

She said doing this research was part of the reason she decided to become a physician and that the experience helped her get into medical school. She said she developed a new perspective on how to look at medicine and how to treat the whole body.

“Research makes you think about what’s going on inside the person,” Benn said.

She said being a part of this research taught her many things that have influenced her approach and work ethic.

“It taught me that you cannot rush research … and be patient because your results and what you expect might be completely different from what’s going on,” Benn said.