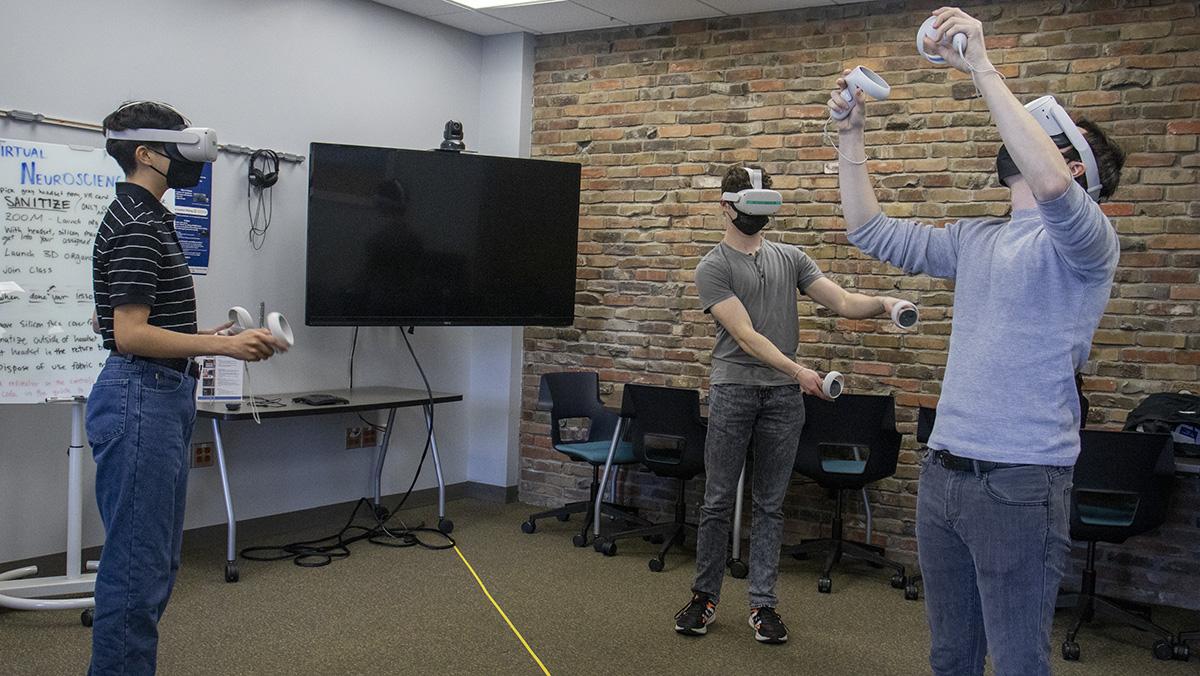 IC Immersive is a program at the college that gives students and professors access to VR equipment. The program is a branch of the Center for Creative Technology (CCT), which also runs a learning lab, digital story lab and makerspace and hosts workshops in different skills including soldering, digital design and cryptocurrency. Through IC Immersive, students can check out VR equipment to play games and professors can partner with the program to integrate VR into their courses. VR technology consists of headsets that connect to digital programs allowing users to enter an immersive three-dimensional environment that they can walk through and interact with, similar to the real world.

“We invited some of the [education] students back to talk about their experiences and they were really excited about having the knowledge to bring to their classrooms,” Lane said. “Knowing that they understand how this technology works automatically just puts them at a different level when they’re going to try and get a job.”

Now, IC Immersive is in partnership with Eber Beck and Sanghee Moon who are both assistant professors in the Department of Physical Therapy and codesigned a neuroscience course with a VR lab.

Lane said that in Fall 2021, Beck was teaching remotely from Brazil and used VR to teach virtual anatomy on the college campus.

“It was really cool because you’re in this lab, and you can just dissect different parts of the brain, hold it, look at it, put it back and have him there talking you through everything,” Lane said.

Beck said the idea for the lesson was to teach something students had struggled with previously in a new way.

“It’s really hard to see the structures deep inside the brain,” Moon said. “That’s why we see some benefit from this VR, because we can actually show these little tiny structures.”

According to a study published in the Journal of Education in Science, Environment and Health, teachers who used VR in STEM classes found that it kept students interested and motivated, inspired creativity, supported individualized learning and helped students understand complex ideas.

Junior physical therapy major Carolyn Langer participated in the anatomy lab in Fall 2021. She said the lab made assessments on the material easier.

Langer said she can see future applications for VR in her studies, and in some parts of the world, VR is already being used for physical therapy, so it was interesting to learn about the technology as it emerges.

According to iMotions, a human behavior research platform, VR physical therapy is being researched as a way to make the experience more engaging, interesting and personalized to the patient. In VR, physical therapy can also be improved by using sensors to track changes in patient mobility or other functions related to an injury.

Senior Wren Andujar is a creative technology specialist at CCT. They said they can see a lot of ways VR can be useful for different kinds of learners, especially neurodivergent people.

“Being physically there and hands-on participating instead of just being talked at by a professor — that would definitely help students that more so have the need to be directly involved in what they’re learning and help them be able to achieve the same amount of success that any other student would be able to achieve just on their own means,” Andujar said.

Moon said the professors plan to continue the VR anatomy program in Fall 2022. They are working on reviewing the experience, fixing any issues, and potentially expanding the program to teach more anatomical structures and more students at a time.

Lane said she is looking to bring more attention to IC Immersive and get VR into more courses in ways that would add to students’ learning experiences.

“With some creative thinking, we can find a way to use [VR] that’s meaningful,” Lane said. “I think that’s the key — you don’t want to use it just because you can.”