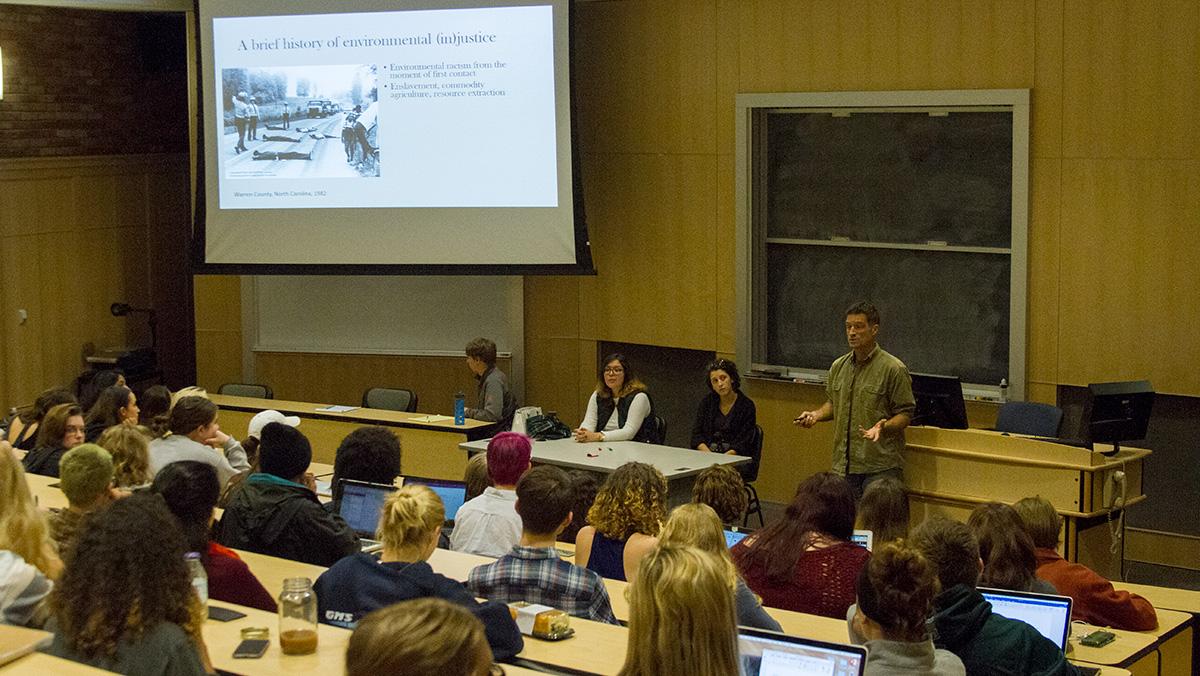 While the Dakota Access Pipeline protests have been in the news for months, IC Progressives held a teach-in Nov. 30 to discuss a topic the group says is missing from the coverage: environmental racism.

IC Progressives previously discussed the Dakota Access Pipeline protests in Standing Rock, North Dakota, in its meetings, but Catherine Proulx, president of IC Progressives and moderator of the teach-in, said she and the other members of the club have watched the developments of the protest consistently build over the past few months and wanted to educate the college community about what was happening. The teach-in was hosted in Textor 103, and attendees nearly filled the lecture hall.

“The Dakota Access Pipeline, I think, is moving towards a boiling point because a lot of people are feeling more pressure because of the results of the election,” Proulx said. “Environmental as well as racial issues are going to be … in way more danger. So I feel that a lot of people are seeing this as much more necessary for action to happen quickly.”

Protests initially erupted about the Dakota Access Pipeline among Native American tribes that said they felt the developers of the pipeline were infringing on their right to the land as well as threatening their and many others’ access to a clean water supply with the transport of crude oil.

A panel at the teach-in consisted of members of the college’s community who could speak to issues surrounding the proposed pipeline and the subsequent protests. Among the panelists were Michael Smith, associate professor in the Department of History and faculty member in the Department of Environmental Studies and Sciences; senior Summer Lewis, a member of the Muscogee (Creek) Nation; senior Victor Lopez-Carmen, a member of the Crow Creek Sioux tribe; and senior Josh Enderle, an environmental studies major and Eco-Rep manager.

Smith gave a presentation on key issues to consider when thinking about the pipeline protest, such as the treaties that serve as historical precedence and police response to protests surrounding the pipeline. Smith noted that the United States’ history of environmental racism is important to consider.

“The pipeline is not going through a wealthy ranching area,” Smith said. “It’s going through a reservation where people of color have been forced to go over many decades, and it’s one of many examples of environmental racism.”

In addition to providing background information on the protests, the panelists advised students on how to support the protesters of the pipeline, whether that be monetarily or by physically going to Standing Rock.

“I think doing what you can is important, and realizing that this is all that I can do is important to acknowledge because we all come from different socioeconomic backgrounds and whatnot,” Lewis said. “But I think giving a lot of emotional support to those who are there is important, as is donating to their legal fund or their campsite.”

Students said they walked away from the event with a better understanding of the complex issues that contributed to the events surrounding the protests. Senior A.C. Tierney said the examples of the intersectionality of racism and environmentalism provided by the panelists were especially informative.