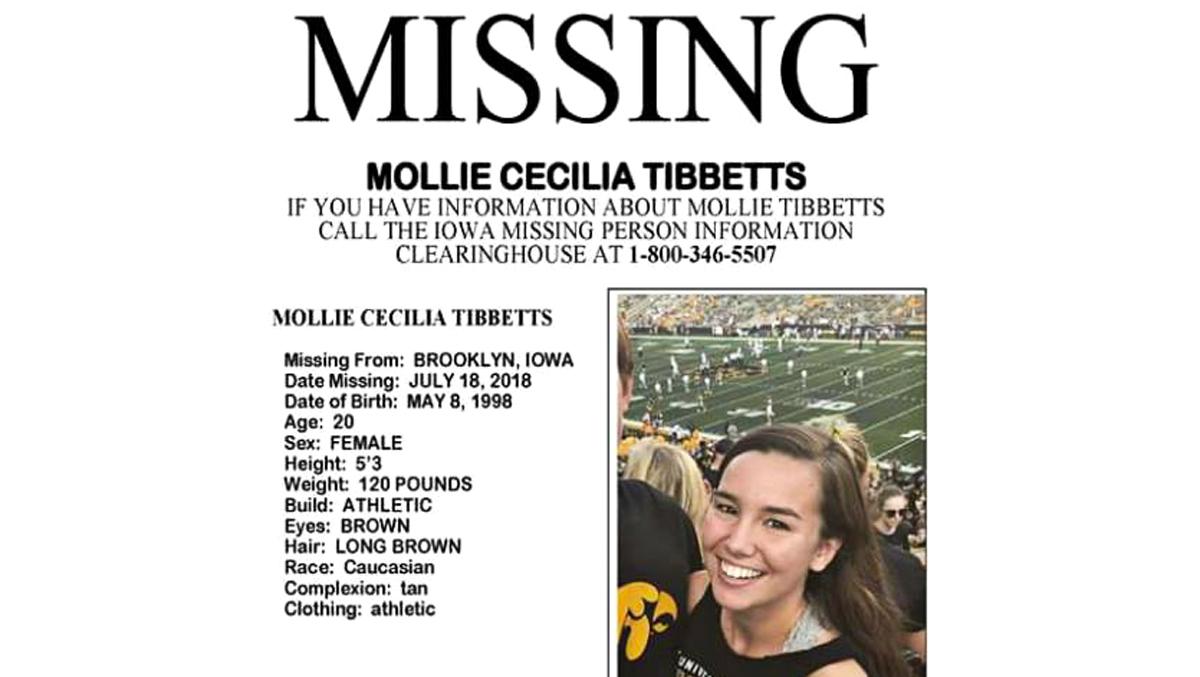 Photos via Facebook and the IC Republicans' website
The Ithaca College Republicans posted a press release on its social media platforms Sept. 4 following the death of University of Iowa student Mollie Tibbetts.
By Grace Elletson — Editor in Chief
Published: September 12, 2018

The Ithaca College Republicans posted a press release on its social media platforms Sept. 4 calling for stricter immigration policies following the death of University of Iowa student Mollie Tibbetts, who was allegedly killed by an immigrant who entered the country illegally.

“Mollie is just one of a long list of Americans citizens who have been slain by the viciousness that is illegal immigration,” the press release stated. “Illegal immigrants come to our country and have no respect for the rule of law. They smuggle in drugs, dismantle communities and abuse the welfare state.”

The statement promotes the widely disputed claim that undocumented immigrants have committed a high number of violent crimes against Americans. According to a study conducted by the Cato Institute, undocumented immigrants in the United States are 25 percent less likely to be convicted of homicide than native-born Americans. Many other studies have also proven this data true.

Tibbetts was is thought to have gone missing while out on a jog in mid-July. On Aug. 21, police found Tibbett’s body, and Cristhian Bahena Rivera was arrested and charged for her murder the same day. 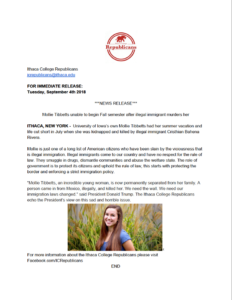 “Please leave us out of your debate,” Tibbetts wrote. “Allow us to grieve in privacy and with dignity. At long last, show some decency. On behalf of my family and Mollie’s memory, I’m imploring you to stop.”

He continued, “The person who is accused of taking Mollie’s life is no more a reflection of the Hispanic community as white supremacists are of all white people. To suggest otherwise is a lie.”

Senior Lucas Veca, president of IC Republicans, said he primarily wrote the press release but approved it with the club’s executive board before posting it on social media.

“We did this because we wanted to start a conversation about immigration,” he said.

Veca said he understands immigrants are often fleeing from “horrific” situations to enter the United States illegally. However, he said, he values upholding the rule of law.

“I wouldn’t say this was racist at all,” Veca said.

Veca said he was not aware of the op-ed that Tibbetts wrote before Veca wrote the press release. He said he understands Tibbetts’ argument and is open to debate whether this press release was the best way to raise conversations about immigration issues, which Veca said was its only intention.

Senior Alyse Harris, president of the Student Governance Council, said via email the SGC does not support the language used in the press release and disagrees with IC Republicans’ decision to politicize Tibbett’s death.

“While SGC respects all students’ rights to speak freely, we cannot condone language and statements that are deeply intolerant,” Harris wrote. “One person’s actions should never stand to represent an entire group of people. When we continue this rhetoric, it wounds our community. On behalf of Ithaca College’s students, SGC offers the sincerest condolences to Molly Tibbett’s family and friends. We hope to honor her legacy by minimizing racist discourse and respecting her father’s request not to use her death to push political agendas.”

There are no rules prohibiting racist language spread by a student group’s social media account in the college’s Student Conduct Code. Michael Leary, assistant director for judicial affairs, said that while the language in the press release is concerning, it is protected under the college’s policy on free speech.

Dave Maley, senior public information officer at the college, did not respond specifically to the content in the IC Republicans’ press release but said college President Shirley M. Collado wants to continue working with the campus to create a more nurturing, respectful, inclusive and equitable environment.