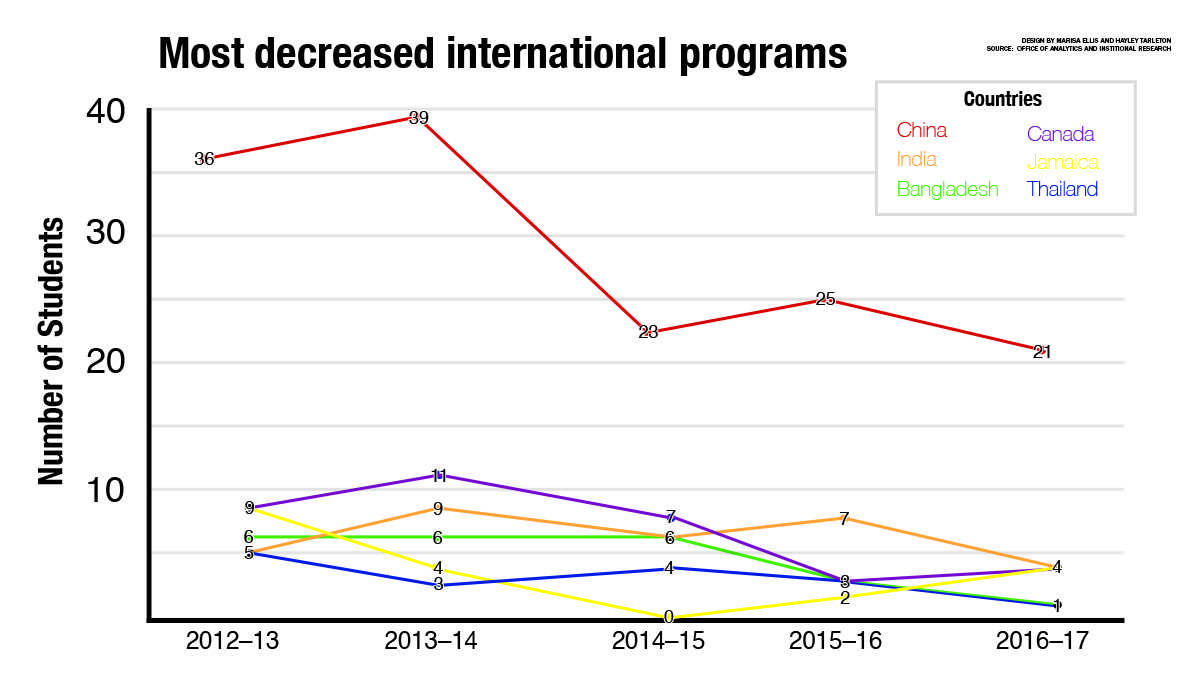 Ricardo Palau flew from his densely populated and lively metropolis hometown in Ecuador to the quaint, American city of Ithaca and did not find what he was expecting. The city boy, who attended an international high school in a suburb outside of Boston, was shocked to find how remote the location is and how small of an international community exists at Ithaca College.

“I have nothing against Ithaca,” Palau said. “I always say Ithaca helped me to be where I am right now. It is why my English got better, and it is why I have more confidence. I learned to push myself, and I will always remember that.”

He now attends Boston University, his dream school, but Palau credits Ithaca College for helping him get there. Despite having great relationships with students and professors, Palau said, he was ultimately not comfortable with the environment and culture of a small college town with such a small percentage of international students. Data from Ithaca College’s Office of Analytics and Institutional Research shows the international student population has decreased from 2.7 percent of the entire student population in the Fall 2013 semester to 2.2 percent in the Fall 2016 semester. The number of freshman students enrolled each year has staggered up and down from 2013 to 2016, making this both a retention and a recruitment issue.

Junior Isabella Grullón Paz, former president of the Ithaca College International Club and international senator for the Student Governance Council, said that the Town of Ithaca is not very diverse in terms of the student population or cultural elements around the town, which is discomforting to international students.

Diana Dimitrova, director of International Student Services, said the small city of Ithaca is exciting to some international students but causes culture shock for many.

“I have fascinating conversations with people who grew up in Tokyo or London and other big, thriving cities, and when they move to Ithaca, it is so quiet,” Dimitrova said. “It is almost deafening at the beginning.”

In addition to culture shock, finances are a deciding factor when international students transfer. According to CollegeTransfer.net, Ithaca College has an average financial aid package of $25,500 out of the total cost of attendance, $59,792. The overall retention rate has ranged from 84 to 85 percent from 2012 to 2015, according to College Factual.

Many international students have also become wary about their residence in the United States because of President Donald Trump’s executive orders, but Grullón Paz said the community has been very supportive and that International Student Services has been a great resource for information.

“Retention is not great, but we also have to keep in mind that this is a private school in the United States,” Grullón Paz said. “I think that it’s a schoolwide problem and not just a problem for international students. I get why it’s a spotlight with the Trump administration, but we have found a way to live here.”

Senior Marcell Fischler said the college’s lack of an official stance on current political issues, like the executive orders, is upsetting for the international community, and that this contributes to international students’ not returning to the college.

The international community at the college is worried and overwhelmed now more than ever because of the Trump administration, and it is frustrating and exhausting for international students, Dimitrova said.

“Students didn’t come halfway around the world to be tracked, or to figure out a political system and what these legal terms mean,” Dimitrova said. “They came to be a journalism major, to play on the lacrosse team or to perform violin in the orchestra.”

Tanya Saunders, assistant provost for International Programs and Extended Studies, said it is difficult to pinpoint exactly why international students do not return, but she thinks that if the country improved its rhetoric toward immigrants, the numbers would improve both retention and recruitment.

“We can only speculate,” Saunders said. “I think it is a difficult time to come to a country where you don’t know how we will be perceived, to be blunt, but if we overcome this rhetoric, we will be able to turn the corner and see our numbers go up.”

She said the new associate director for the Office of Admissions, Eric Weinhold, has been traveling a great deal to advocate for international students’ considering applying to the college.

As the soulful sounds of African drumming echoed through the Campus Center on Monday night, Ithaca College kicked off its own celebration of International Education Week 2011.