IC SGA Executive Board candidates for 2015-16 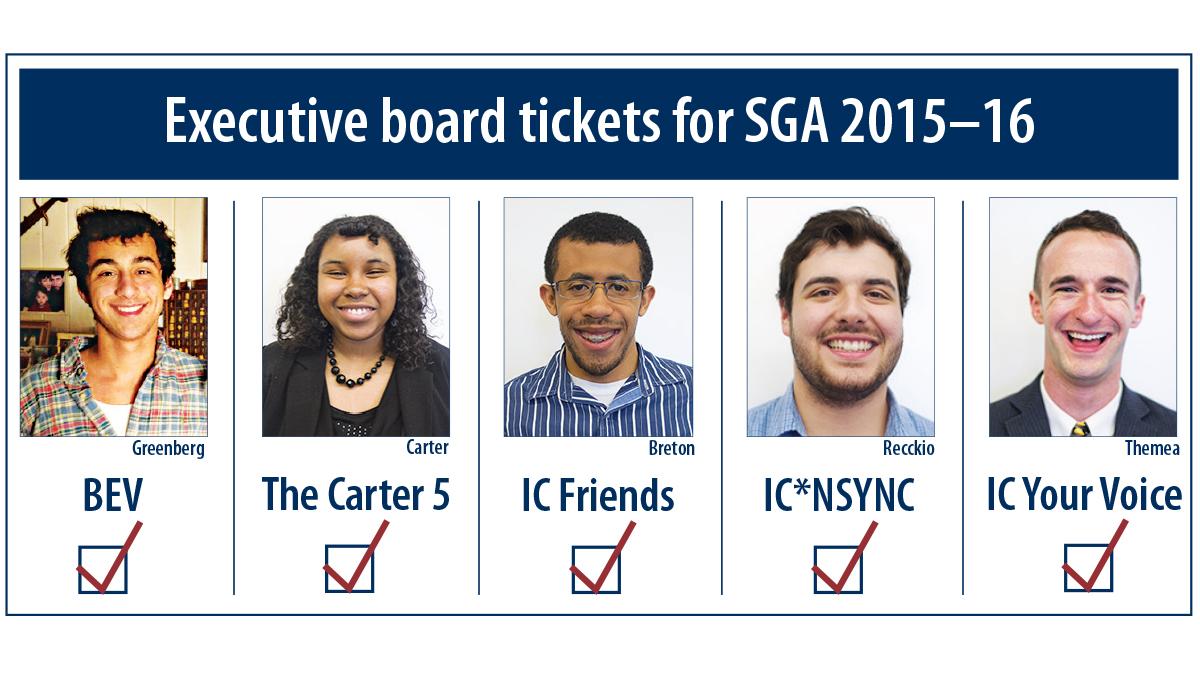 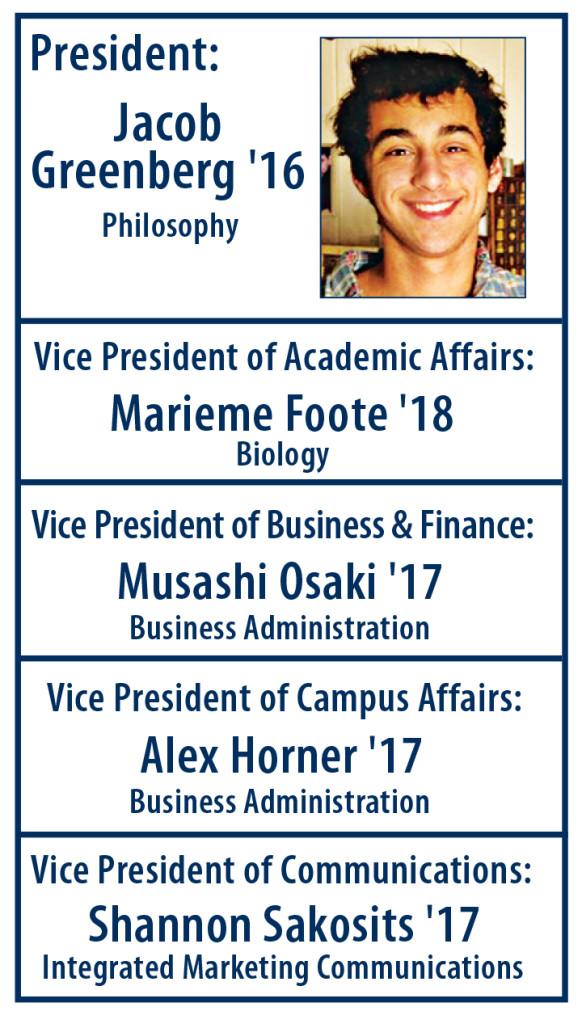 The name BEV, in honor of junior Jacob Greenberg’s grandmother Bev, also stands for “be visible,” which Greenberg said is a key tenant of his slate’s agenda.

“Our general platform is that we are really strongly advocating for campus and community engagement,” Greenberg said. “What we really want at the most basic, simple level is to increase pride and spirit in Ithaca and to create activities that make us feel at home so that we’re stimulated in between classes.”

Greenberg said his slate wants to ensure students feel connected to one another on campus and engaged in activities other than classes.

He said he also wants to support and further student activism. He said by creating a more connected atmosphere, students can speak with a more unified voice when the college takes actions the student body disapproves of.

The BEV platform also states the group feels student government has become inaccessible to the student body. As a result, Greenberg said an initiative that he has been working on throughout the year, and an additional part of BEV’s platform, is creating a physical space that brings student government to students.

The space would allow students to voice their ideas for the campus as well as submit any complaints to the Student Government Association, Greenberg said. In addition, he said it would be a place for students to meet with the executive board and talk more directly with them. 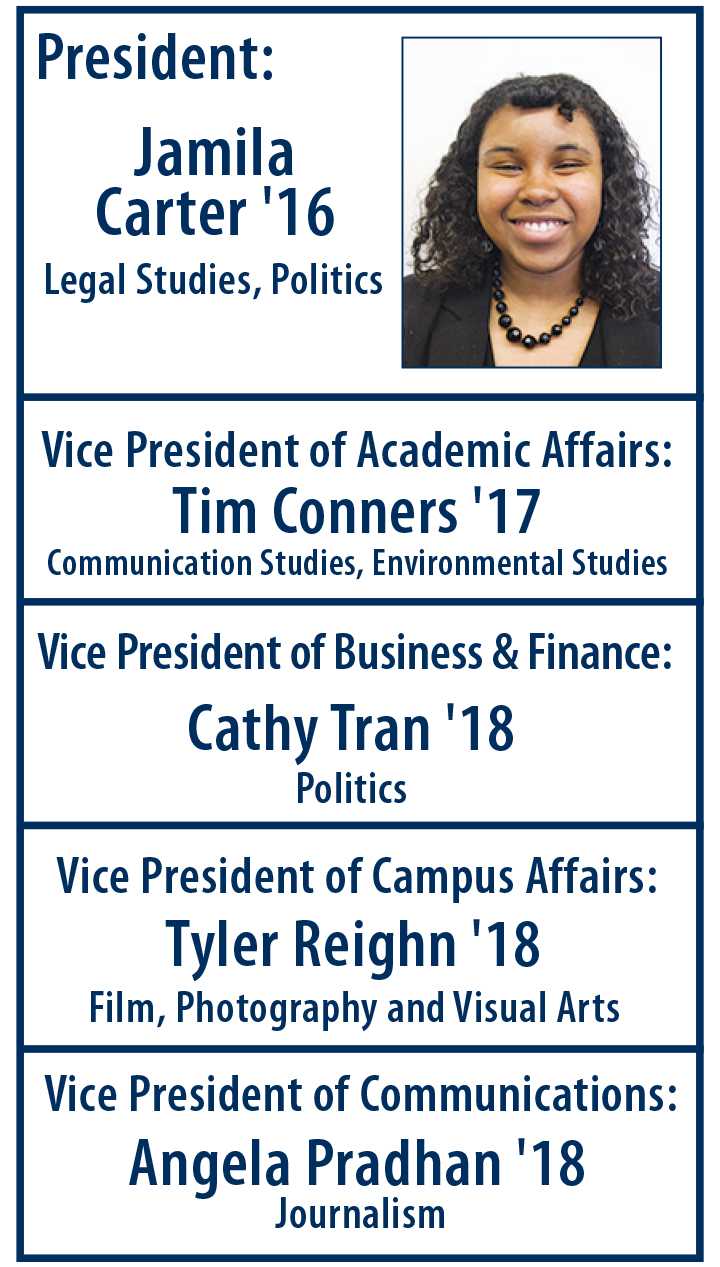 Junior Jamila Carter said the three primary tenants of The Carter 5 executive board slate are community, empowerment and collaboration. She said a sense of community between the Student Government Association and the student body is an essential aspect that is needed on a college campus.

“We want to make sure that every person in the community feels they’re a part of this community and making sure that everyone knows what’s happening in SGA,” Carter said. “SGA represents all students, not just one demographic of students.”

A specific initiative Carter said her executive board would look to implement is making the student organization funding process more transparent by having tutorials on the way to request funds. She also said The Carter 5 slate wants to provide the student body with more information on who sits on the Ithaca College Board of Trustees, as well as make executive board office hours more accessible by moving them to different locations around campus. Carter said she also wants to encourage SGA senators to engage more with the student body.

In addition, Carter said her slate wants to ensure student resources, like the Center for Counseling and Psychological Services, are adequately funded. Finally, she said her slate wants to focus on educating the campus community on what microaggressions are and how to avoid committing them, which is an ongoing initiative in the current SGA. 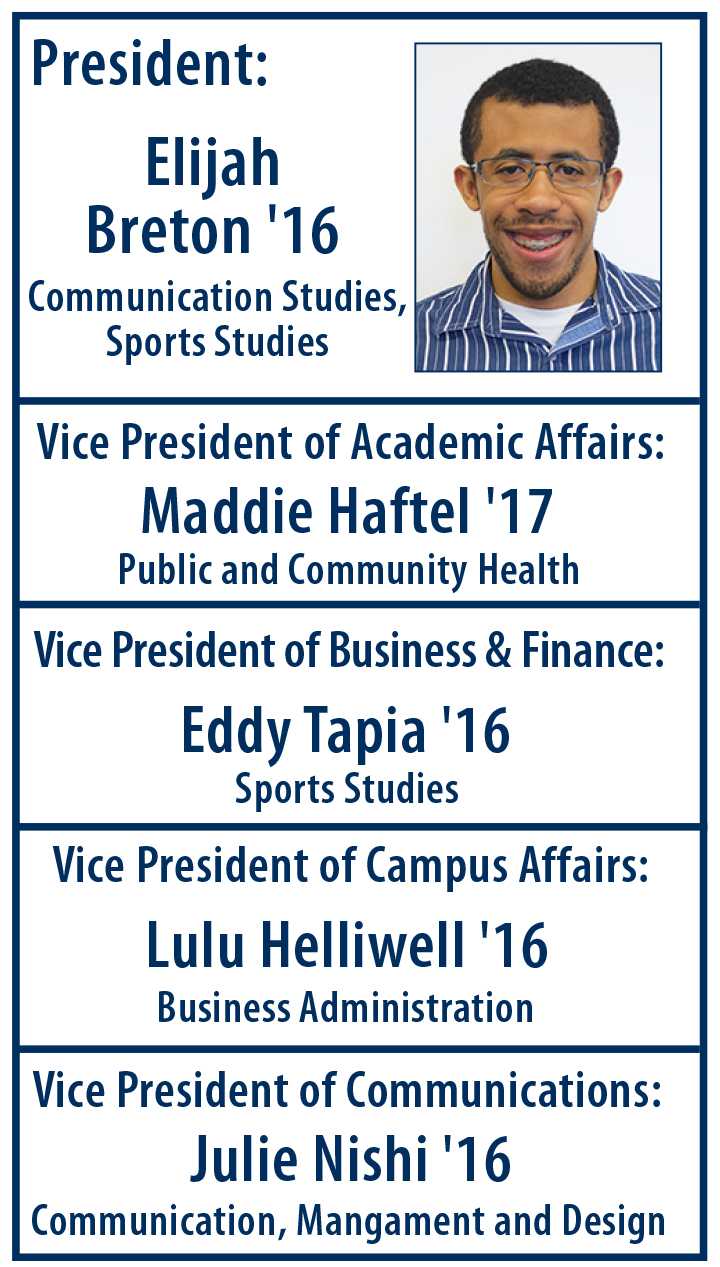 The IC Friends slate is running on a platform of generating increased positivity on campus, junior Elijah Breton said. He said he wants to create a campus atmosphere that fosters greater inclusivity among members of the college community.

“We chose our theme to be IC Friends because … we want this campus to have that friend kind of atmosphere,” Breton said. “We’re all friends on campus here, and we need to embrace that more.”

Some specific initiatives Breton said the IC Friends slate will pursue if elected as the executive board would be working with administrators to make the Integrative Core Curriculum less restricting and more conducive to collaboration between the different schools at the college.

Breton said another idea he believes will help in his effort to change the culture on campus is to move the Office of Public Safety and Emergency Management to a more central location on campus. Breton said this would help to foster a better relationship between Public Safety officers and students, an initiative that was set in motion by the Student Government Association this semester.

Breton also said he wants to work to develop a closer relationship with alumni of the college to create a better endowment. He said a larger endowment would give the college additional resources to provide services to students. In addition, Breton said he wants to split the student organization funding process into blocks instead of semesters, which he believes will more fairly distribute funding to the organizations applying. 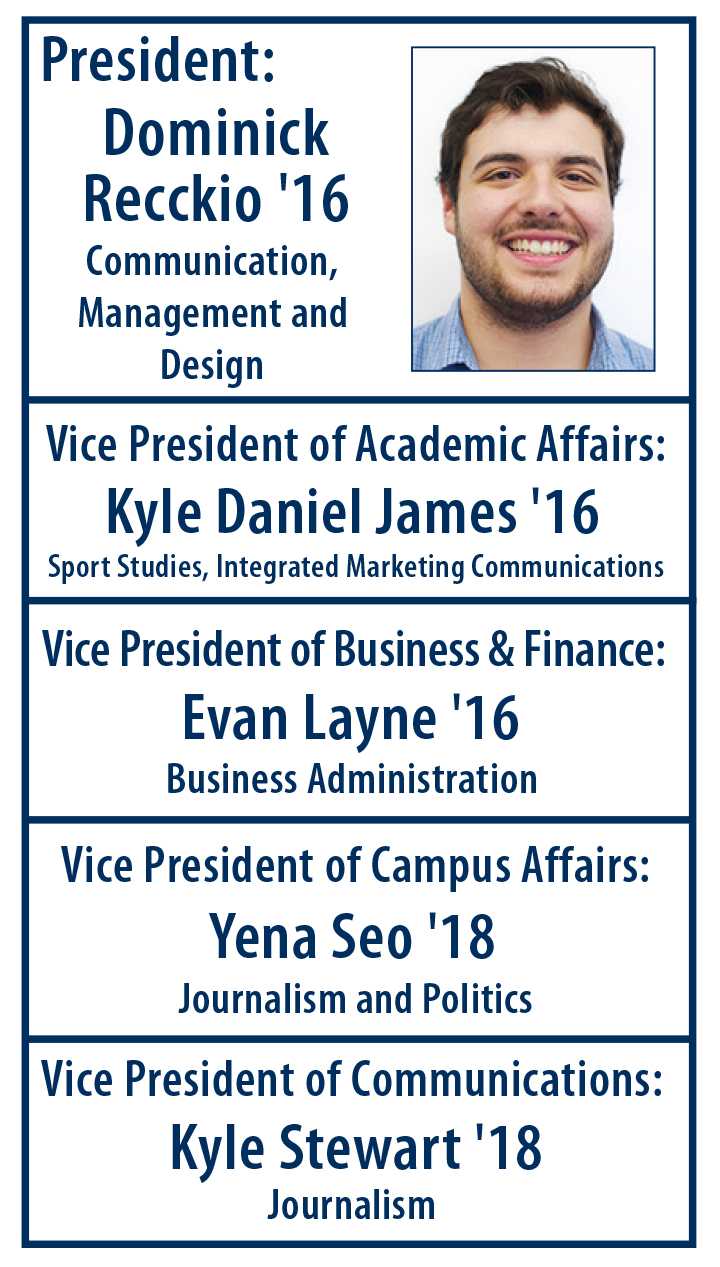 Junior Dominick Recckio said one of the principal focuses of the IC* NSYNC platform are student rights. He said after reading through the student handbook and seeing how much the college expects of students, students should be able to hold the college to the same level of accountability.

“Our ticket is looking to draft, eventually with the whole campus community, a student bill of rights that sort of adds to the narrative and supplements the code of conduct with … what the students expect of the administration,” Recckio said.

Recckio said an additional part of the IC* NSYNC platform is ensuring the academic strength of the college, specifically by addressing student concerns with the Integrative Core Curriculum and working with the administration to expand the programs offered under the curriculum.

Other initiatives the slate would pursue include exploring different options to expand the reach of the college’s Sexual Harassment and Assault Response & Education program and advocating for the Center for Counseling and Psychological Services to receive additional funding.

Recckio also said IC* NSYNC wants to see the return of conferences run by the college promoting women running for positions in government, as well as an LGBTQ Studies minor and a structured Indigenous Studies minor. In addition, he said reducing microaggressions through educating the campus community on them would be a top priority.

Finally, Recckio said he believes there needs to be more collaboration between student organizations that advocate for the same cause or do the same kinds of activities. He said increased partnership would increase the attendance of organizations’ events and would be a better use of resources. 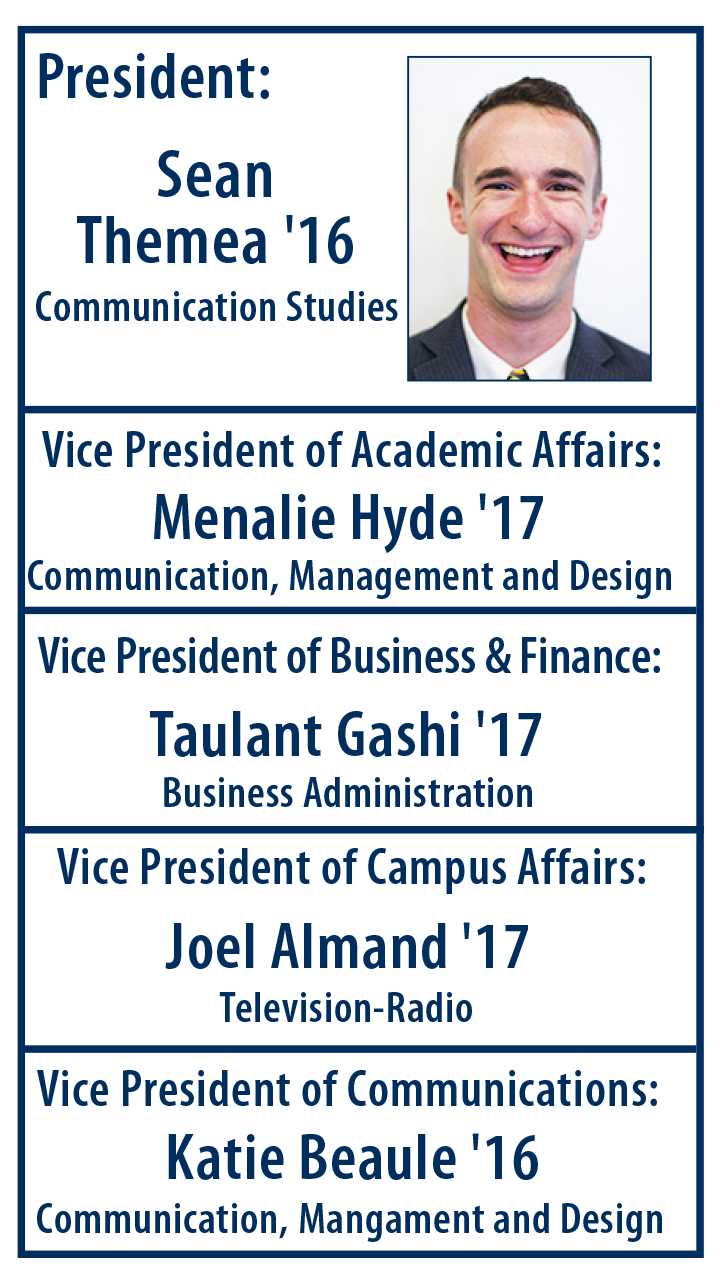 Junior Sean Themea said the principle vision of IC Your Voice is recognizing the kinds of changes students want to see on campus.

“When we were developing our platform, we went out, we went on the ground, in the pub and the dining halls and the residence halls and the library, and we asked people … ‘What’s important to you at this school, what do you think we could do better at this school? What do you want to see [the Student Government Association] do?’” Themea said.

Themea said one of the primary goals of IC Your Voice, if elected as the executive board, would be to fight against crippling student-loan debt and for college affordability. Themea said this could be accomplished if the students unite with a strong enough voice to force the administration to listen.

Themea also discussed the issue of microaggressions, saying while it is extremely important to provide education and dialogue to reduce their prevalence, IC Your Voice opposes the bill passed this semester by the SGA recommending the creation of an online reporting system for microaggressions because such a system would limit free expression.

Additional parts of the IC Your Voice platform are aiding the movement to provide additional funding to the Center for Counseling and Psychological Services and ensuring student meal plans are worth the cost. Themea also said his slate will advocate for increased flexibility in the Integrative Core Curriculum and in support of an LGBTQ minor and structured Indigenous Studies minor.

Finally, he said IC Your Voice wants to make the SGA more transparent. One suggestion Themea had was to livestream the SGA meetings.