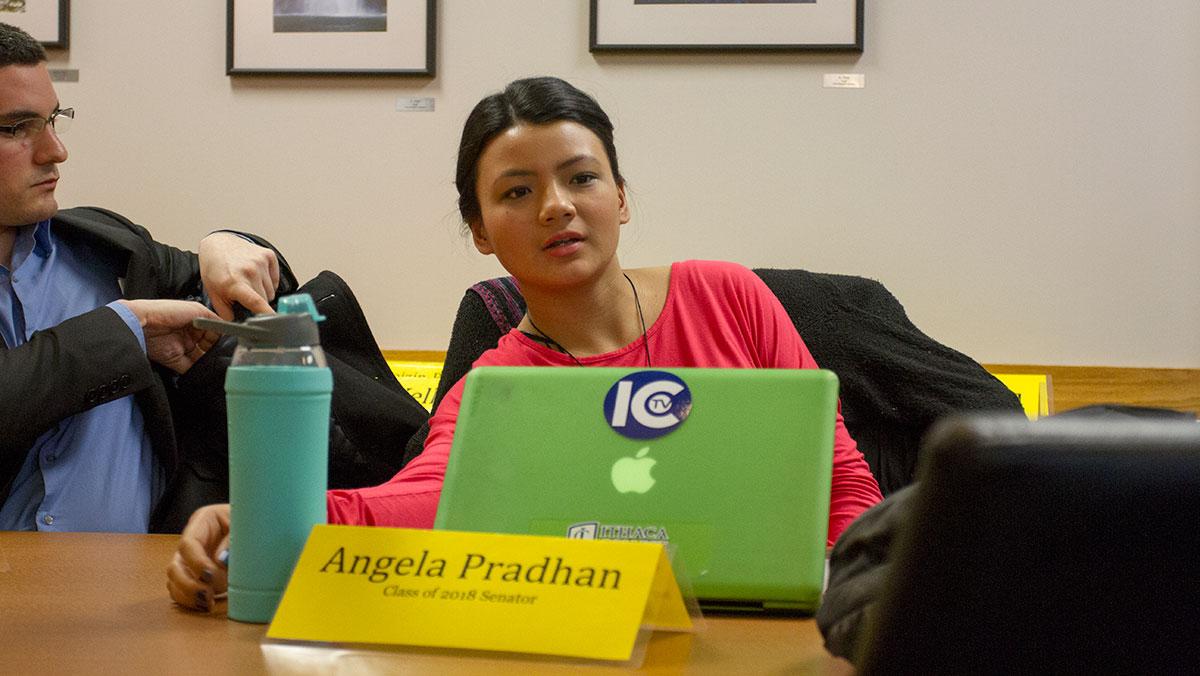 Kaitlyn Kelly/ The Ithacan
Class of 2018 senator Angela Pradhan sponsored the bill SGA passed on March 18 which calls for the implementation of a campus-wide online system to report microaggressions.
By Evan Popp — Staff Writer
Published: March 18, 2015

The Ithaca College Student Government Association passed a bill March 16 to create an online system to report microaggressions, which sponsors of the bill said will create a more conducive environment for victims to speak about microaggressions.

The bill, sponsored by Class of 2018 senator Angela Pradhan, calls for the implementation of a campus-wide online system to report microaggressions to “make Ithaca College a safer, more inclusive and diverse community for all students.”

Pradhan said the online system would fill what she sees as a lack of an adequate system to report microaggressions.

“I know a lot of senators are working on microaggression stuff within their respective schools, but I felt that there was a need for something to happen schoolwide,” Pradhan said. “And if there was a concrete way to document [microaggressions] online, it would provide students a way to kind of state what’s going on.”

The system would allow individuals reporting microaggressions to remain anonymous. However, junior Kyle James, vice president of communications and co-sponsor of the bill, said those reporting a microaggression would likely have to reveal their identity if they wanted to pursue any legal action.

James said in addition to a space to report the particular incident, the online system would track the demographics of those reporting microaggressions as well as those accused of committing them.

Pradhan said the way the demographic information would be tracked is not set in stone, but it will likely be based on a temporary pin and coding system. She said the system would note the gender, race, age and school within the college and year of both the person reporting the microaggression and the person being reported.

The system would also contain a way to distinguish between staff, faculty members and both international and American students, as well as a mechanism to include where the microaggression took place, Pradhan said.

She said the demographic information would be used as data regarding the issue of microaggressions. Currently, Pradhan said there is no data system tracking microaggressions at the college.

The bill does not currently state that the names of people accused of committing microaggressions will be reported. While Pradhan said she believes the names of alleged offenders should be reported, she said there could be possible legal barriers.

James said the college’s legal affairs representatives are looking into potential legal roadblocks regarding the online system. However, he said he is not sure exactly what parts of the bill are coming under legal scrutiny.

“There’s a lot to sort through,” James said. “They haven’t told me the parts that are worrying them.”

However, he said in his initial conversation about the bill, the question of anonymity in the online reporting system came up as a potential legal problem. But he said it was indicated that there is a way for the bill to be legal.

The bill calls for a committee to be created to begin the process of creating and implementing the online reporting system.

Junior Elijah Breton, senator for the School of Health Sciences and Human Performance, said he supports the bill.

“Just like any other resolution that we want to pass with microaggression and diversity in the institution, what it does is it helps to make people think a little more before they do or say something,” Breton said.

Breton co-authored a bill addressing microaggressions within the School of Health Sciences and Human Performance in October 2014, leading to a series of similar bills in the other schools.

Pradhan said the bill is not meant to be a cure-all solution to the issue of microaggressions. She said it is meant to work in tandem with bills the SGA has already passed to address microaggressions in the individual schools of the college. Class of 2015 senator Taj Harvey said this is one of the main reasons he supported the bill.

“I thought this was a very effective means of trying to navigate [microaggressions] because having separate schools just kind of doing their own thing … kind of takes away from the larger effort,” Harvey said.

Sophomore Joshua Kelly, senator-at-large, was the only SGA member to vote against the bill.

Kelly said he was taken back by mentions of taking legal action against people who commit microaggressions.

“The very definition of a microaggression is that it isn’t intended, so the very idea of taking legal action against somebody for not intending to say something that happened to be harmful is not my idea of living in a free society,” Kelly said.

Harvey also said there should be involvement from the general student body, as well as departments such as the Office of Student Engagement and Multicultural Affairs and the Center for the Study of Culture, Race, and Ethnicity.

“We need to make this more than just an SGA-run committee,” Harvey said. “Because I don’t think that’s going to be enough.”