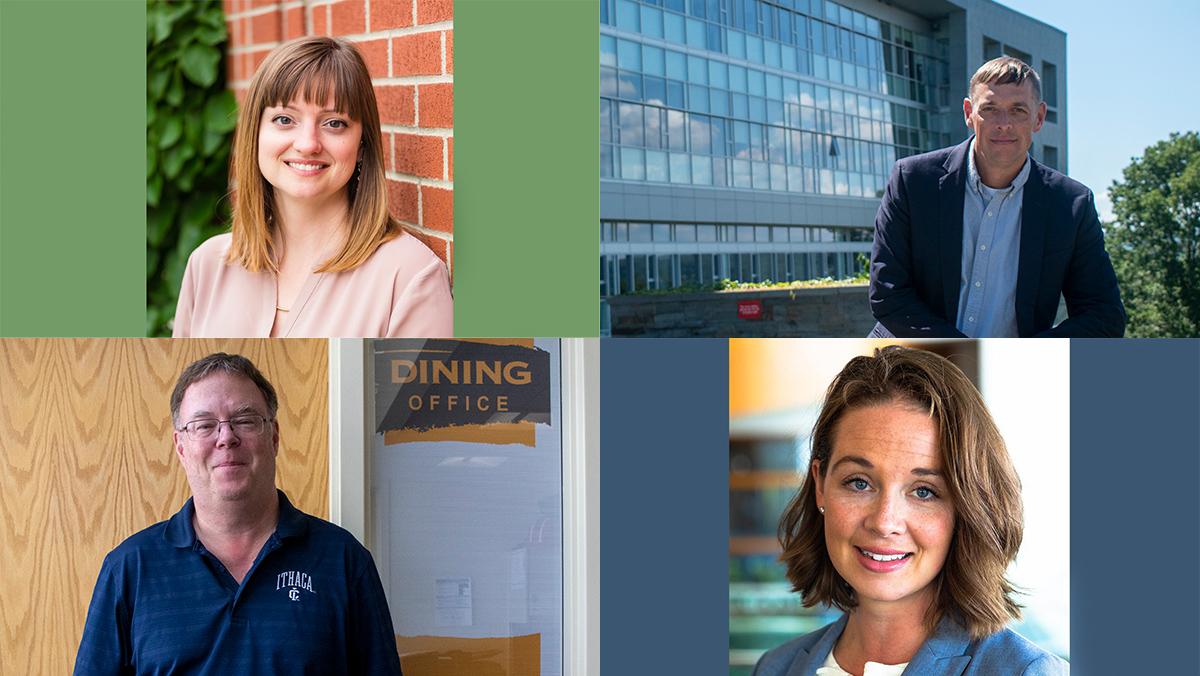 Laura Davis was appointed as director for both the Ithaca College Offices of Residential Life and Student Conduct and Community Standards in July 2022. She began working at the college in 2018 as assistant director for Housing Services. Before then, she was a residence director at Keene State College in Keene, New Hampshire, and held positions in residential programs at Cornell University.

Caryanne Keenan began as director for the Office of New Student and Transition Programs in August 2022. Keenan worked in Career Services at Ithaca College from 2009 to 2018. She has since served as a coordinator of Applied Learning Initiatives at Tompkins Cortland Community College and founded LifeWorkSource, a professional development training program. Prior to joining Ithaca College in 2009, Keenan was the director of Career Services at Keuka College in Keuka Park, New York.

Mame Ndiaye was appointed as assistant director for the Office of New Student and Transition Programs in August 2022. Ndiaye joined Ithaca College in 2021 as a residence director, working in the Offices of Residential Life and Student Conduct and Community Standards. She was also a Title IX hearing officer and chair for the Diversity, Equity, and Inclusion Committee in the Office of Residential Life. Outside of Ithaca College, she served as Residence Director at SUNY Cortland, where she was also founder and chair of the Anti-Racism Committee in the Residence Life and Housing Office.

Chaplain Yasin Ahmed was appointed as director for the Office of Religious and Spiritual Life in August 2022. Chaplain Ahmed currently teaches the Civil Rights Seminar at Ithaca College. He has a decade of experience as a chaplain at multiple higher education institutions, including Cornell University. Chaplain Ahmed is currently the head of strategic development at Common Ground Services, an Islamic consulting firm.

Scott Doyle was appointed as director of Energy Management and Sustainability in the Office of Facilities in June 2022. Since 2007, Doyle has worked in the Tompkins County Department of Planning and Sustainability. He also worked as a planner and project coordinator at Cornell University and the University of Oregon. Doyle graduated from Ithaca College in 1998 and served as an environmental studies and sciences adjunct instructor from 2014 to 2019.

Steve Barnes was appointed as assistant director of athletics and the Athletics and Events Center operations and budget manager in July 2022. Since 2006, Barnes has been a swimming and diving coach at multiple institutions, including Kalamazoo College in Kalamazoo, Michigan, Wabash College in Crawfordsville, Indiana, and Pennsylvania State University in University Park, Pennsylvania. Barnes graduated from Ithaca College in 2005, where he was on the swim team. He joined the Ithaca College Athletic Hall of Fame in 2018 as a four-time All-American swimmer and college record-holder for multiple races.

Dave Prunty retired from Ithaca College in June 2022 after 35 years of working in multiple offices. Prunty began his most recent role as executive director of Auxiliary Services in 2015, and he also held leadership positions in the Office of Student Affairs and Campus Life and the Office of Residential Life. He received the Ithaca College Presidential Medal at the college’s 2022 commencement ceremonies. Prunty was also a lecturer in the Department of Strategic Communication’s live event design and management minor in the Roy H. Park School of Communications.

Mary Holland-Bavis left Ithaca College in June 2022 after almost five years as the associate director of Student Involvement in the Office of Student Engagement. Holland-Bavis was involved in the Student Activities Center’s redesign and developed the events newsletter, Weekly Happenings. She was involved in student-run organizations, including BomberTHON, as a mentor and advisor. Holland-Bavis now works in the Tompkins County Chamber of Commerce as the event and program manager.

Lynda Walters retired from Ithaca College in July 2022 after 34 years in the School of Humanities and Sciences (H&S). Walters started working at the college in 1988 as a secretary in H&S and later took an administrative support role. In 2001, Walters became assistant to the dean and held that position until her retirement, working with six different H&S deans.

Lisa Searle left Ithaca College in July 2022 after over 12 years in the Office of Admission. Searle began at the college in 2009 as an admissions counselor and has since become the associate director of admission. She represented the college on several committees through the New York State Association for College Admission Counseling, serving as co-chair and delegate of committees as well as vice president of professional development. Searle was awarded the National Association for College Admission Counseling Rising Star Award in 2014. She has started a new position in the Office of Admissions at Wells College in Aurora, New York, as the director of recruitment.

Lynn Cortese left Ithaca College in May 2022 following nearly five years in the Office of Access, Opportunity & Achievement. Cortese helped the office receive several STEM and minority opportunity grants, resulting in millions of dollars in funding for the college. She was responsible for directing programs such as the Higher Education Opportunity Program, Collegiate Science Technology Entry Program and more. Cortese previously worked at Le Moyne College in DeWitt, New York, and Binghamton University in Binghamton, New York, as an academic advisor and counselor. She said in a LinkedIn post that she is pausing her career to focus on family.

Sandy Kelley retired from Ithaca College in June 2022 after 22 years in the Office of Admission. Kelley began working at the college in 1999 and served as the associate director of admission. During her time in admissions, Kelley facilitated partnerships with external scholar programs and served as a liaison for the college’s graduate program. During her time at the college, Kelley concurrently served as a historian and coordinator for the New York State Transfer Articulation Association.