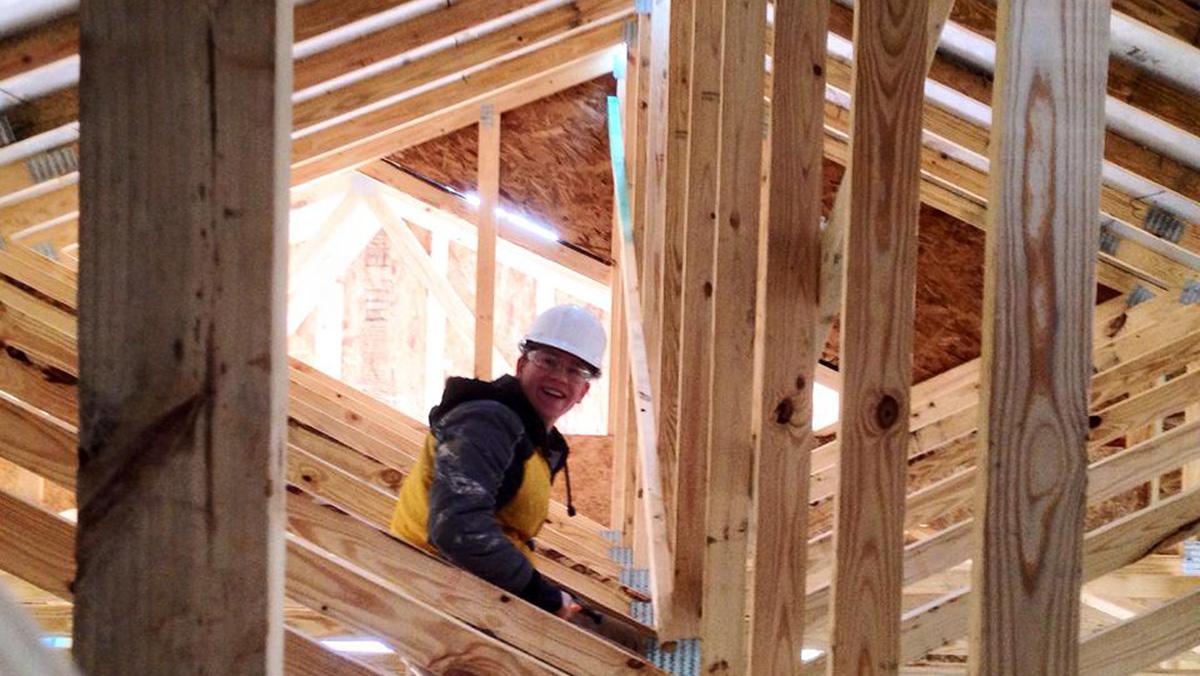 For Ithaca College senior Kevin Doubleday, community service takes a variety of forms — whether that’s building houses with Habitat for Humanity or running around in a polar bear suit to advertise for the Special Olympics’ New York Polar Plunge.

Doubleday, a communication management and design major, is president of the Ithaca College Habitat for Humanity chapter, vice president of Student Volunteers for Special Olympics NY and treasurer of Big Brothers/Big Sisters on campus.

His drive to continue with service, Doubleday said, comes not only from the desire to surround himself with people who are also eager to help out, but also from his high regard for character and respect.

“I see a lot of individualistic tendencies in our society, where we measure success by how much money you make at a certain point in your life,” Doubleday said. “I do it because I want to give back to the community, but I also want to foster respect.”

Doubleday said he credits his parents for his dedication to community service. His mother had worked for a women’s shelter before he was born, and his parents both worked at soup kitchens. He said his family’s holiday tradition of Christmas caroling at nursing homes and homes for people with disabilities was particularly inspiring.

“My giving attitude and my service is all because of my parents,” Doubleday said. “Every single year, they exposed me to what it could be like to be making little differences in someone’s life.”

Doubleday said his first service projects stemmed from interactions he had with classmates in high school. A conversation that particularly struck him was when he ran into a former classmate who was then living in a home for individuals with disabilities at a concert, and she said that living in the home made her miss music. It was then that Doubleday realized he had the capability to make a difference: He created a program that went into Springbrook homes, a residential community center for people with disabilities,  in Oneonta and taught music lessons to residents.

“That’s when I realized I could foster a connection with these individuals and that I could really, really enjoy working with individuals with disabilities,” Doubleday said.

Doubleday went on to work with volunteer groups on campus as a freshman at the college. After his freshman year, he got an internship with Special Olympics New York and has been working with the organization ever since. His main function there is organizing the Polar Plunge, its main fundraising event, which can entail working with spreadsheets or doing more physical work.

“Special Olympics can get very hectic because sometimes I’m on the ground,” Doubleday said. “You’ll see me guerrilla marketing in a polar bear suit for the Polar Plunge at Chili Fest. I’m literally in a polar bear suit, running around and passing out flyers.”

Senior Samantha Ampel, president of Students Volunteer for Special Olympics New York, said Doubleday is a valuable member of the organization because of his energy and his passion for working with athletes with disabilities.

“He always comes to meetings excited to work with our volunteers and, at practices, is always ready to work and have fun with the athletes,” Ampel said. “Kevin’s energy and passion for the causes he pursues is contagious and makes those around him more energetic and passionate about their work as well, and that is a truly unique and inspiring quality.”

Other than working with Special Olympics New York, Doubleday has done a lot of work with Habitat for Humanity since he joined during his sophomore year. He said working with Habitat for Humanity could mean anything from building the foundations of a home to putting in the finishing touches on the interior. Doubleday will be going to South Carolina over winter break to build houses with members of the college’s chapter.

Chandler Robertson, vice president of the college’s chapter of Habitat for Humanity, said Doubleday’s dedication and drive to help others is evident through his work with the organization.

“You can tell that this is something he is passionate about, and it rubs off on those who talk or work with him,” Robertson said. “He’s so enthusiastic to make a difference in any kind of scale, and he truly does.”

When not volunteering, Doubleday works as a public relations consultant to build up his professional portfolio; serves as the captain of Nawshus, the college’s Ultimate Frisbee team; and still manages to get eight hours of sleep a night.

“Sleep is important,” Doubleday said. “One of my favorite CEOs … said that ‘You dream your way to the top.’ That means that she gets eight to 10 hours of sleep every night. You don’t have to compromise sleep.”

Graduation is fast approaching for Doubleday, but he said all that he’s learned as a volunteer, as a student and even as an ultimate frisbee player will help him after he leaves the college in May.

“All these experiences are cumulative in one way or another,” Doubleday said. “One of the things I want to translate from my college experience and everything I do here is the importance of integrity. … I try to do honest work … and that means that I’m doing the best that I can all the time.”