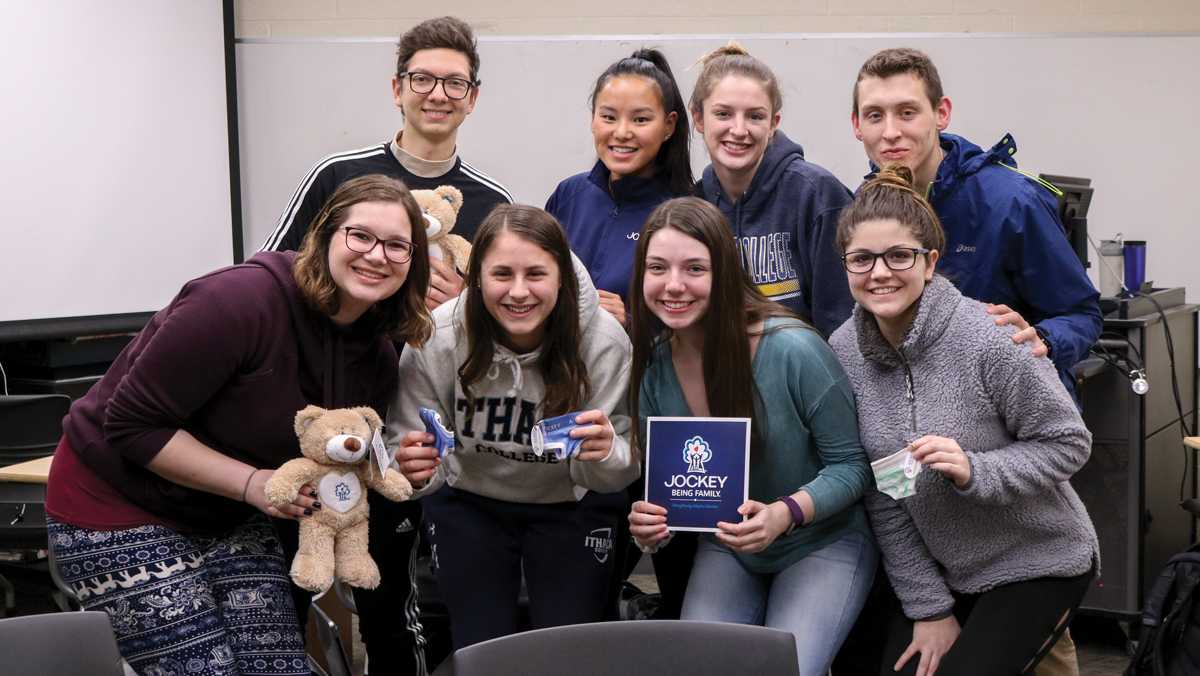 Caroline Brophy/The Ithacan
Members of the Jockey Being Club work to advocate and raise awareness around the positive impacts of adoption.
By Krissy Waite — Staff Writer
Published: April 4, 2018

Sophomore Adrienne Smith has been named a 2018 Newman Civic Fellow by Campus Compact for her work in the chapter of Jockey Being Family at Ithaca College.

Jockey Being Family is a foundation that helps support adoptees and their families and advocates for adoption. The foundation is sponsored by the underwear company Jockey International. Campus Compact is a national organization that advocates for community service in higher education.

Campus Compact President Andrew Seligsohn said the award is given to students who are making a positive difference in their communities. The student should be doing advocacy work that raises awareness of important issues, he said.

Smith said she has been working to a bring a chapter of JBF to the college since her freshman year when the organization reached out to her to be its first college ambassador. The club became recognized by the Office of Student Engagement and Multicultural Affairs in Fall 2017.

The club helps support adoptive children on campus and builds a community of adoptees. They meet biweekly and currently have 120 members on the email list with around eight people attending the meetings, Smith said. The club also helps support adoption through initiatives like the JBF Bears, which provides stuffed animals to children going through the adoption process. Smith said half the funds raised for the sales goes to the company to help post-adoption services.

Smith said she wanted to help bring the organization to the college because of her own experience being adopted. Smith was adopted from Seoul, South Korea, at six months old.

Newman Civic Fellows are awarded by both Campus Compact and a respective college or university president, he said. The fellows are then connected to a networking group and a mentor to expand their advocacy efforts, he said.

When the program beings, Smith said, she will receive her mentor. The fellowship is a one-year program that begins in the upcoming academic year.

The diverse community on campus is welcoming of a progressive club like JBF, Smith said. She said she wanted to bring the club to campus because she wants to shed more positive light on adoption in contrast to the negative stigma often associated with being adopted.

Seligsohn said he believes Ithaca is a forward-thinking area that is a good starting place to spread positive views on adoption. It is important to put faces to adoption stories, like Smith, to showcase positive outcomes of adoption, he said.

“I think Ithaca being located in a world area where there is real diversity in political views and different cultural backgrounds gives the opportunity to build relationships and partnerships,” Seligsohn said. “I think that’s a tremendous opportunity for Ithaca College.”

Freshman Emma Fruhling, a current member of JBF, said she joined JBF because she wanted to help spread awareness about the positive outcomes of adoption. She is not adopted, she said.

“Adoption isn’t something that’s looked at as positive as it should be in society,” Fruhling said. “The fact that there was a club that I could be a part of on this campus that could make the future generation of parents more aware of it was something I thought was really unbelievable.”

Sophomore John Wikiera was adopted by his fathers from Vietnam at around six months old and said he feels that adoption is not looked at as negative in society, but he said he wishes it was represented in the media.

“In films, it hasn’t really been featured,” he said, “I think it would be good if there was more awareness because I know growing up, in films, I didn’t really identify with the families. If there’s more presence of people like myself, it would be more helpful for them to reaffirm that they’re not so different.”

Although not a member of the club, Wikiera said he wishes adoption was more normalized in society because he said he thinks many view it as a second option. Additionally, he said adoption is an avenue for those who are unable to reproduce to have a family.

“It gives people like my dads, who are biologically unable to produce a child of their own, the ability to have a family that they’ve always wanted,” Wikiera said.

National Adoption Month to be recognized by college