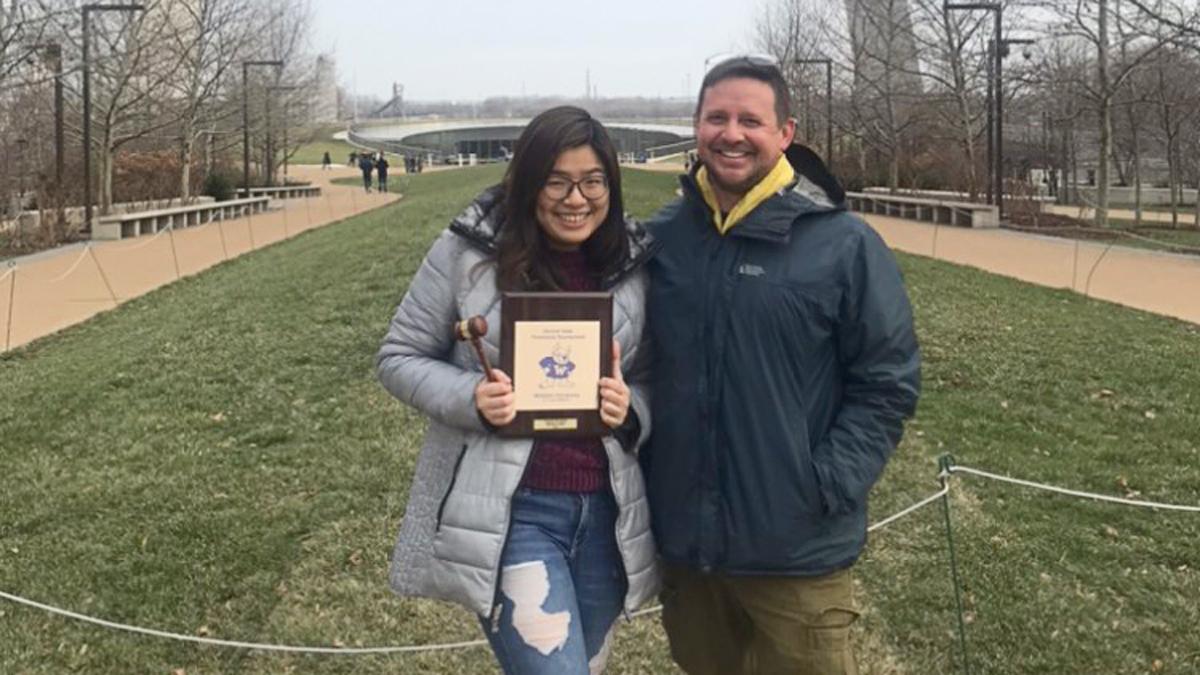 Courtesy of Callie Nguyen
Junior Callie Nguyen poses with Scott Thomson, assistant professor in the Department of Communications Studies and coach and adviser of the speech and debate team, after winning the championship title.
By Julie Dannevig — Staff Writer
Published: February 12, 2020

Junior Callie Nguyen is the first student from Ithaca College to win the championship title at the National Forensic Association’s Lincoln-Douglas Debate at the Gorlok Gala forensics tournament in the junior varsity division.

Nguyen and sophomore Sarah Lawal represented the college’s speech and debate team at the tournament Jan. 24–26 in St. Louis at Webster University. Nguyen, president of the Ithaca College Speech and Debate team, said she and Lawal competed against students from approximately 40 other universities on the topic of energy policy.

“Speech and debate strains your brain. Being able to survive that is very impressive,” she said. “But [the speech and debate team] is a lot of fun. We travel, and we make a lot of friends from different schools.”

Scott Thomson, assistant professor in the Department of Communications Studies and coach and adviser of the speech and debate team, said the team was created in 1920.

Nguyen said she has been competing in debate tournaments since high school. She said she was interested in continuing this hobby and joined the college’s team after a classmate recommended she go to a meeting.

Lawal, who joined the team in Spring 2020, said the Gorlok Gala forensics tournament was the first intercollegiate debate competition she participated in. She won in the novice division against competitors from Hillsdale College and Illinois College, she said.

“It was an amazing experience, and I had a lot of fun,” Lawal said. “I can’t wait to continue participating in future tournaments and strengthening my speech and debate skills.”

Thomson said the team teaches a variety of skills because debating requires quick thinking and attention to detail.

“The skills all around are incomparable,” Thomson said. “You learn to do research efficiently, how to do research and record things and organize them in a way that you can then draw different things from them. You learn to be an advocate and think on your feet and defy arguments and have strategies.”

“After every tournament, you feel good,” Nguyen said. “Even if you totally bomb it, you still make a lot of good friends and have a lot of meaningful conversations with other people.”

Lawal said she values the impact the team has had on her public speaking skills and how her practicing and work directly pays off.

“The most rewarding aspect of the team is being able to put into practice what I am learning through competing,” Lawal said. “Being able to be a part of something that is so informative and also fun makes the speech and debate team special compared to other organizations on campus.”

Nguyen said she believes any student should join the team. She said it is useful in honing public speaking skills and offers a place for collaboration and team spirit.