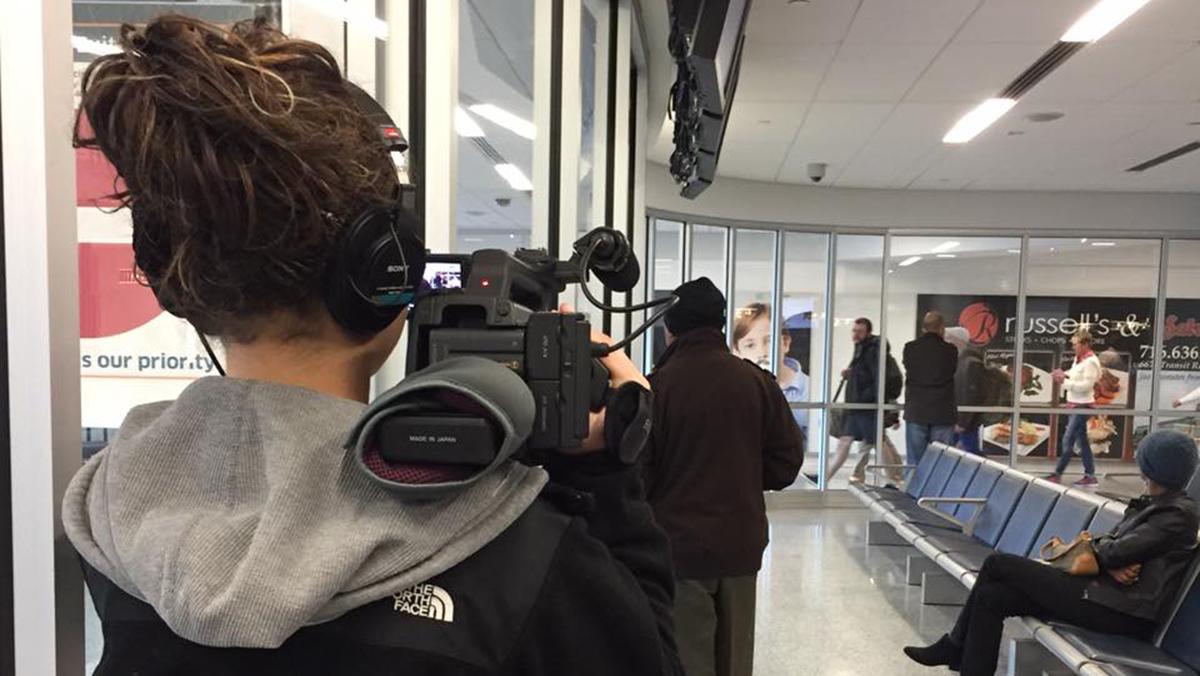 Photo courtesy of Daniella Hobbs
PIctured above, senior Daniella Hobbs films a scene from her documentary “The City of Good Neighbors" which won her a national award.
By Marissa Proulx — Contributing Writer
Published: February 14, 2017

Immigration was a hot topic during the 2016 election, which led senior Daniella Hobbs and Evin Billington ’16 to investigate how immigrants in Buffalo, New York, contribute to the city’s economy and society. The resulting documentary won them a prominent national award.

Together, they received the Jury Award at the Directors Guild of America Student Film Awards for their film “The City of Good Neighbors.”

“It felt great to receive the award; it was a bit unreal when I got the call,” Hobbs said. “It’s very difficult to plan. Even though I shot the film as a junior, it was my senior thesis project — the culmination of my college career. So to get an award for that work, it was awesome.”

“When you do a documentary, you don’t know what’s going to happen,” Billington said. “We picked the topic very early on. I’d seen an article on NPR about the refugee population, and we thought that it was perfect.”

Hobbs said they began filming their documentary in January 2016 and finished in April. While they were filming, Hobbs and Billington worked with Journey’s End Refugee Services to travel to different places in Buffalo, where they could meet and interview refugees.

One of the places Hobbs said she spent a lot of time filming was in a building called the West Side Bazaar, which consists of many small shops owned by refugees and immigrants who sell clothing and food from all over the world.

“The whole point of it was to show the human side behind the refugee debate, because you read the numbers and the random stories in the news, but we wanted to show that these are real families coming here and that they are giving back to the community,” Hobbs said.

One of the people Hobbs interviewed was Rwandan refugee Rubens Mukunzi, the current CEO and founder of a newspaper called Karibu News, located in Buffalo. Mukunzi’s newspaper is a multilingual and multicultural refugee and immigrant–focused newspaper. Besides filming refugees, Hobbs was also able to interview the mayor of Buffalo, Byron Brown. He said in the film that since 2006, Buffalo has invested $5.5 billion in economic projects, which have created over 12,000 new jobs that immigrants could fill.

A few weeks after interviewing the mayor, Hobbs said, she attended a Trump rally where he spoke about how Buffalo was in a depression and that 40 percent of Buffalo citizens have been losing their jobs since 2001. She found that this did not correspond to the statistics given by Brown.

Arturo Sinclair, former assistant professor in the Department of Media Arts, Sciences and Studies, said he assisted Hobbs on some postproduction work for the film and that he was impressed with the effort she put into the documentary. Her willingness to go outside of Ithaca with the subject matter impressed him, Sinclair said.

“There was also a lot of research done on Hobbs’ part, which is expected in a thesis film but does not always happen,” Sinclair said.

“Take the time to listen, watch and hear stories like the ones that we are trying to show, and recognize that these are real human lives that we are talking about,” Hobbs said.

Marissa Proulx can be reached at mproulx@ithaca.edu