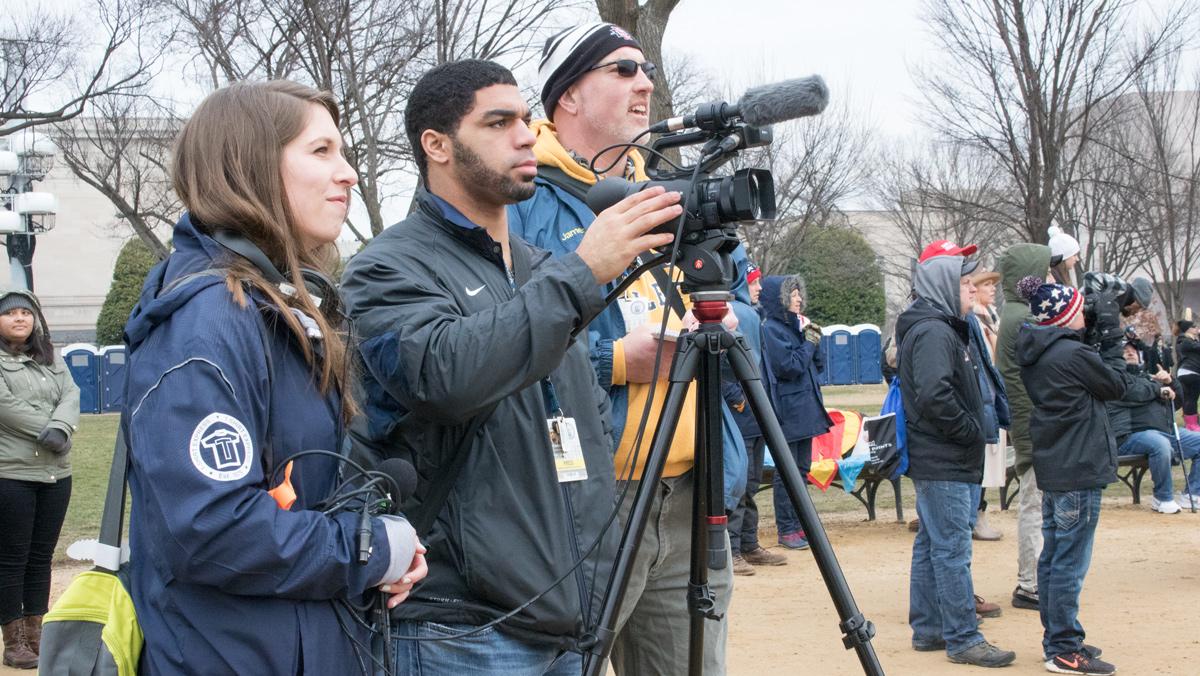 While Donald Trump was making history being sworn in as the 45th president of the United States, Ithaca College students helped deliver that history to millions of viewers across the country.

James Rada, associate professor in the Department of Journalism, and Anthony Adornato, assistant professor in the Department of Journalism, presented 10 students with the opportunity to work as freelance journalists with PBS for its social and digital inauguration coverage by tweeting, live-blogging and helping with video production. The students who had the necessary courses and experience were selected based on their demonstrated ability to operate in a fast-paced, boisterous environment, Rada said.

The college had worked with PBS four years ago to cover the 50th anniversary March on Washington, and Rada saw the inauguration as the perfect opportunity for students to once again take part in a historic event.

Senior Erin McClory was tasked with speaking to attendees of the inauguration, asking why they were there and what their experience was like, recording their answers in a live blog. While Dischino was interviewing crowd members, a bystander applauded her for pursuing a role in journalism.

“A young man who I hadn’t gone up to or initiated a conversation with just came up to me and said, ‘Your job is important,’” McClory said. “With everything going on right now in the world of media, it was really nice to have someone recognize that the media is important and what we do for our jobs is important and that we do need to keep doing it.”

Junior Tom Garris’ job was to follow crowds of protesters — some reaching into the thousands — with PBS producers and correspondents to capture the scene. Despite a few visible arguments, Garris described the anti-Trump gatherings to be predominantly calm and peaceful.

“Everyone was trying to voice their opposition,” Garris said. “Everyone knows this was a really divisive election and campaign. There were people that were voicing a lot of different concerns for different issues, whether it was the environment or civil rights — things like that. It wasn’t to stop the actual inauguration.”

Alongside PBS Correspondent Lisa Desjardins was junior Ahana Dave, who said she got a glimpse of the protesters while providing content for the PBS NewsHour handle. Even with the clash of liberal and conservative ideologies, Dave said she saw the two polarized sides respectfully debate their differing views.

“It was a sense of hope that people can have a discussion about their differing viewpoints, but for me, personally, as a student journalist, it has been one of the highlights of my career as a journalism and politics major at Ithaca,” Dave said.

Dave said reporting on the inauguration and being a part of this historic event was an impactful experience, as they were able to leave their mark on this monumental point in history.

“Sometimes you can observe history, or you can experience history, but I think in this case, we were really a part of making history,” Dave said. “Getting news out there: the first impressions of the inauguration, the speech, why people are there, why people attended. It’s definitely going down in the history books, so to write a little bit of the rough draft is what I was really grateful for.”

This article has been edited to reflect the following change: Erin McClory’s quotes were incorrectly attributed to Erica Dischino.