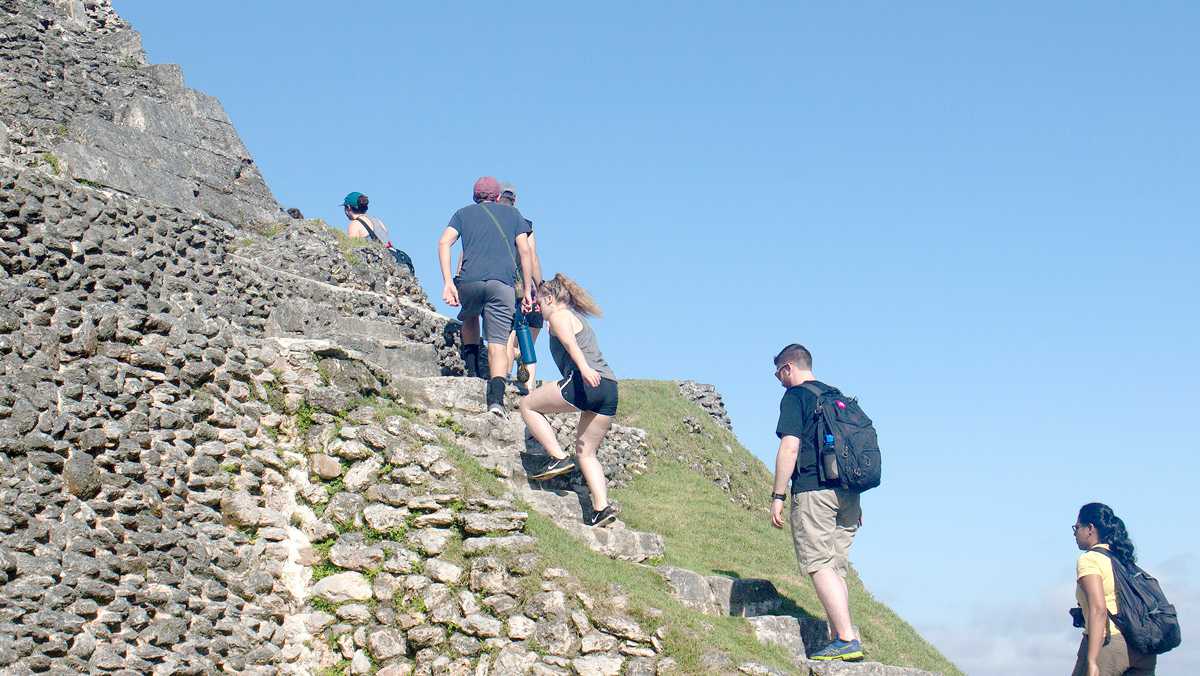 Photo courtesy of Ian Philip
IC students hiked the Mayan archaeological sites Xunantunich and Caracol while on a cultural immersion in Belize. They learned about Mayan culture and traditions.
By Hannah Fitzpatrick — Staff Writer
Published: January 29, 2019

Following a night of camping in a national park in western Belize, Susan Allen-Gil, professor in the Department of Environmental Studies and Science, and her students woke up to hike to the Offering Cave, where pieces of preserved pottery from the ancient Mayan civilization could be found.

This is one of the numerous experiences that Ithaca College students had during the winter 2019 Belize immersion trip, where a group of 20 students spent two weeks in the Central American country to learn about different environmental issues the country faces and experience them on firsthand.

The immersion trip is concurrent with “Belize’s Rainforests, Reefs and Ruins,” a special topics environmental studies course offered every fall semester by Allen-Gil. Allen-Gil said the class is in its eighth year and focuses on a variety of interdisciplinary issues present in Belize, like the different aspects of its tropical climate, how it increases biodiversity and the multiple threats ecosystems in Belize face.

The immersion trip, which happens over two weeks in January, is a separate course that tests students’ knowledge and gives them an opportunity to experience what they were taught about in class. Some activities during the trip include walking through forests to identify species of plants discussed in class and visiting the Cockscomb Wildlife Sanctuary and Jaguar Preserve, which the students were first exposed to through class readings.

Allen-Gil said she was inspired to create the course because she wanted to use it as an opportunity for students to be able to travel during their college career while also gaining a new perspective on the world around them.

“Along with our department having a cultural immersion requirement, I have grown up with a very international life, and so I’ve come to appreciate an international perspective on things with a particular interest and experience in less developed countries,” Allen-Gil said. “Through this class, I wanted to give the chance for Ithaca College students to experience that, especially if they didn’t have the chance to go for a whole semester.”

Junior Savanna Lenker first heard about Allen-Gil’s class and immersion trip through word–of–mouth by other environmental studies students who had taken the class before. She said she chose to take the class because she believes that it is important for college students like herself to learn about other cultures.

“I think that having a class like this that offers that opportunity, where you learn so much about a country, and then are well equipped to be respectful and know what to expect, is what piqued my interest,” Lenker said. “All of the things that come with participating actively in the class, and then seeing that in action when you go to Belize, reminded me that what we are learning in our major classes can be applied in a real–world context.”

In addition to visiting various forests and preserves across Belize, all 20 students in Allen-Gil’s class also participated in a homestay, where each student spent a few days living with a local family and helped them with everyday activities to experience how the people of Belize live.

Junior Jon Lambert had previously been on a cruise to Belize. He did not take the fall course but decided to go on Allen-Gil’s immersion trip after she offered him a spot before winter break. He said that the homestay was his favorite part of the trip because it was able to give him a better understanding of the Belizean culture.

“At the resort I stayed at in a previous vacation in Belize, everything there seemed all sunshine and rainbows and really happy,” Lambert said. “However, that vacation didn’t allow me to see much of the country itself. Staying with the local people and seeing what a typical day was like was an incredible opportunity because it filled in the gaps of what I was missing when I previously visited and allowed me to better appreciate their culture and their relationship with nature.”

Allen-Gil said that people should seriously consider taking this class because of its role in exposing students to different perspectives.

“Belize, in particular, offers students the opportunity to see an entirely different way of life,  where most homes don’t have locking front doors or locking windows, and people spend most of their time outside,” Allen-Gil said. “There is a strong sense of community and an easygoing attitude about life that they may never have encountered if they have been mostly in the United States and Europe.”

I have always been interested in the archaeology of South America, especially Peru, one of the areas of the world where high civilization developed. My interests and field experiences in that region range from studying the earliest hunter-gatherers of the coastal zone to the Inca conquest of much of western South America in the 15th…