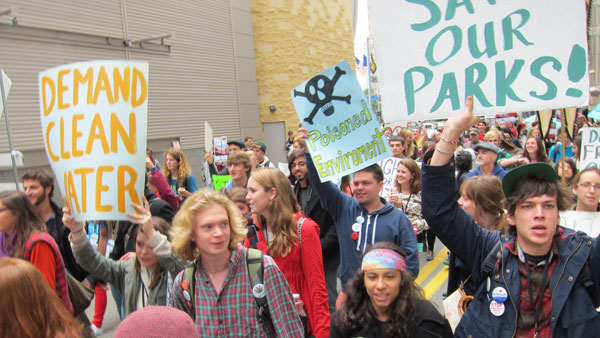 Roughly 6,000 people in the national movement for clean, renewable energy congregated in Pittsburgh last week to speak out against wasteful energy practices. Among the youth leaders were 25 Ithaca College students learning how to organize environmental justice campaigns for green energy.

Power Shift, the conference of environmental and social justice groups in the name of the climate crisis, was held on Oct. 18–21 in Pittsburgh’s David L. Lawrence Convention Center, the only convention center in the world with Leadership in Energy and Environmental Design Platinum certifications in existing building operation and Gold certifications in new construction.

Sophomore Erika Bucior, treasurer of the Ithaca College Environmental Society, said about 20 workshops were offered each day on themes of food justice, social equality and eco-spirituality, beginning at 9 a.m. and continuing until 5 p.m. Keynote speeches by leaders of prominent environmental organizations such as the Sierra Club and 350.org were featured between 7 p.m. and 9 p.m. each evening.

Senior Rachel Hallock, secretary of ICES, said she viewed this year’s Power Shift as an event that advocated for more than just renewable energy.

“It’s more focused on taking the environmental movement from just focusing on energy and bridging it out to environmental justice — caring more about anti-oppression, anti-racism, eco-feminism — including voices that aren’t necessarily often heard,” she said.

Hallock said the testimony of Kandi Mossett from the Indigenous Environmental Network was particularly moving and exemplary of the concept of intersecting environmental and social issues.

As a woman born and raised in a Native American reservation in North Dakota, Mossett spoke of the harmful effects that fracking and drilling have brought to her community of about 1,500 people, including increased pollution and crime rates from the presence of fracking miners. Hallock said she felt the emotion of the story.

“It was in a crowd of about 5,000 people, but you felt like you were just having a conversation with her,” Hallock said.

Three days of these panels and workshops led up to the main event on the last day, the “Action” portion of the conference.

During the Action, Power Shift attendees marched across downtown Pittsburgh from 11 a.m. to 2 p.m., protesting banks such as PNC, which invests in fossil fuels. Their demands reflect the broader divestment movement, which urges big companies to divest from fossil fuels that are harmful to the environment.

However, Bucior said none of the college’s students in attendance stayed for the protest. Senior Jeremy Betterley, co-president of ICES said the students left simply out of fatigue from the conference.

Bucior said the students noticed passionate people throughout the weekend forming negative subgroups within the large movement. She said such groups grew angry over seemingly small things. For example, she said she witnessed some non-college students forcefully grabbing a microphone, having felt offended in response to a speaker addressing the crowd as primarily college students.

Betterly said he noticed some groups creating similar heated disturbances, but protests are bound to occur in such a large activist conference.

“When you have a big rally with thousands of people, there are going to be different groups and people with different opinions,” he said. “There’s division about certain issues, but it’s not anything to be alarmed about.”

This was Betterley’s second Power Shift conference, and he said each convergence was a strong reminder of the expanse of the environmental movement.

“It brings people together in a way that you get to see the solidarity and the numbers in the
movement that we have,” he said.

Power Shift is an opportunity for students regardless of whether they are a part of ICES. Daubenspeck said it is an empowering event because people can take action steps toward environmental justice.

While previous national conferences were held in Washington, D.C., the move to Pittsburgh this year was appropriate given Power Shift’s focus on grassroots organizing, and Pittsburgh being the first major American city to ban fracking, Jones said.

Jones said the stalemate in the nation’s capital was another factor in pushing the movement toward the grassroots strategy.

“We found that it hasn’t worked to wait on elected officials to take action … so we prefer to get out in the grassroots and lead from there and demand that they follow,” he said.

It is the intermingling of environmental issues with social justice issues that is the take-away for the students, Hallock said.

“Unless you have a respect for everyone in your culture, you’re not going to have respect for the nature that your culture is in,” she said. “We are all in this together, and we’re all fighting this system that’s kind of messed up.”