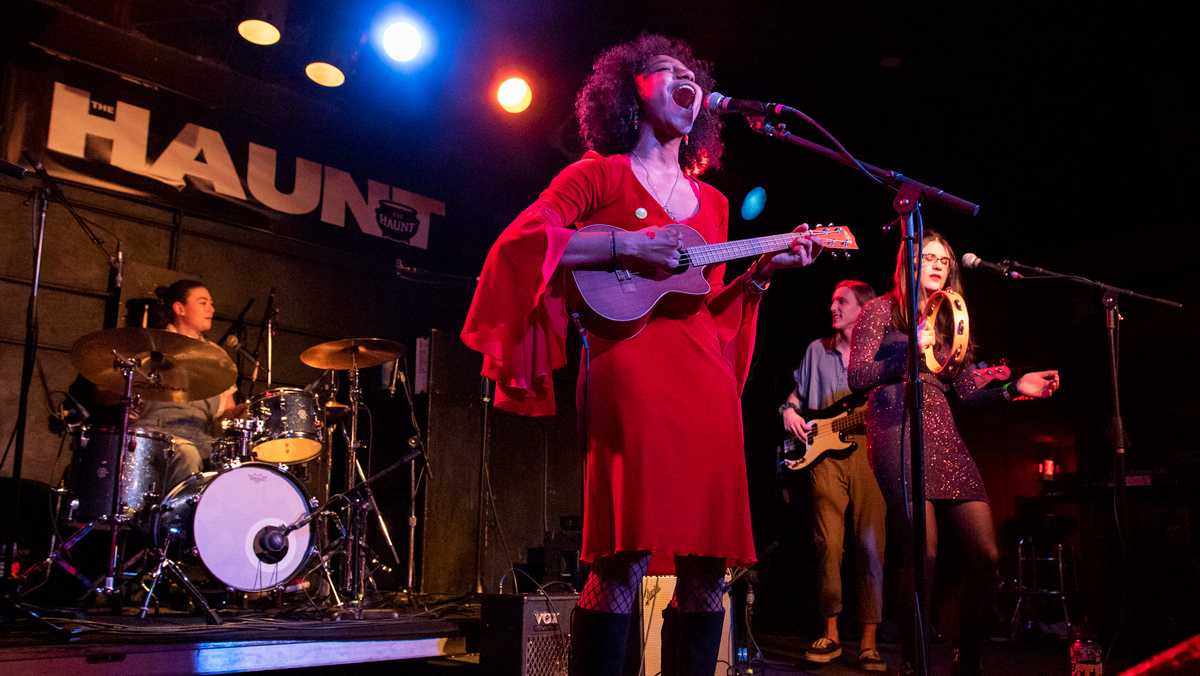 Jonah Hirst, a member of Assigned Female at Birth 4 (AFAB4), a local all-transmasculine a cappella group, stepped onto The Haunt stage Feb. 14 with a ukulele in his hands.

He told the completely packed room that the song he was performing was influenced by his experiences at Planned Parenthood, which helped him learn about self-love and acceptance.

“Planned Parenthood is one of the reasons I feel safe here in Ithaca,” Hirst said.

Hirst was one of the handful of performers, including Ithaca College student musicians, who participated in the second annual Planned Parenthood of the Southern Finger Lakes Benefit Show. The benefit concert coincides with Valentine’s Day. The event was sponsored by Dan Smalls Presents (DSP) Shows, a concert promoter company, and Ithaca Underground, a not-for-profit organization that promotes underground music. The event was also put on by Ithaca College senior Kyra Skye and Mickie Quinn, director of Park Promotions, the college’s in-house promotion agency, who emceed the event.

The event had an eclectic bill of musicians from both the college and the Ithaca community. The bill included seniors Abby Sullivan and Skye and Quail, a band made up of sophomores Anna Young, Madison Carroll, Ali DeRagon, Gabe Zall, Sam Laemmle and David Florentin, junior Jacob Graham and senior Dan Yapp. Local musicians like Hirst, Lady Borderhop and Vee Da Bee also performed.

The concert raised over $3,000, which is over $1,000 more than the previous year’s concert, said Leah West, the talent buyer at DSP Shows.

Planned Parenthood is a nonprofit organization that provides reproductive health services and education. It offers birth control, sexually transmitted infection (STI) testing, treatment and vaccines, pregnancy tests, cancer screenings, gynecological exams, patient education, LGBTQ services and general health care, according to its website. Only approximately 3% of people who use its services get abortions.

Anti-abortion advocates have pushed to defund Planned Parenthood and hold annual March For Life rallies to reverse Roe v. Wade, a landmark court case that gave women the right to have abortions in 1970. Some states are trying to block funding from a state level, including Kansas and Ohio.

After a very successful event last year, West said that she was inspired to put on the event again and to make it a larger, more community-wide event this year.

“People want to be here,” DeBerry said. “So the fact that everybody wants to be here and support Planned Parenthood and come see us in the process I think is just amazing.”

Like many of the performers, organizers and audience members, DeBerry has personal ties to Planned Parenthood.

“They’ve given me some answers,” DeBerry said. “Everybody there is very supportive. It’s affordable, and it’s accessible. It’s very, very accessible. And it’s not just cis female questions. It’s everybody. And I think it’s important that even men — even cis men or any men wherever you fall on the spectrum — have somebody there to support you more than to just stick a finger up your butt and ask you to cough, you know what I mean? There’s a whole other level.”

“People don’t normally see that [female-dominated events] in the music industry,” West said. “I know that in my job, as a talent buyer, I am sometimes the only woman in the room. It was just really powerful to have all women run the event and play the event.”

West said she hoped to better reflect the wide range of people who use and need Planned Parenthood services with a more diverse organizational staff and music lineup.

“We felt like last year we were kind of excluding people,” West said. “Having Jonah, as a trans man, I think is really powerful because, obviously, Planned Parenthood helps a lot of people in the trans community, … all genders, all sexual identities.”

Skye said it was special to both organize and perform at the event.

“To [also] be one of the performers is crazy because you’re actively creating the space for the event to happen and then also sharing energy in that space,” she said. “That’s another reason why I like Planned Parenthood is that they create spaces for people to feel safe and to be safe.”

Skye said she hopes to help West put on the third annual benefit show next year.

“It was amazing seeing all of these local bands come together to support Planned Parenthood,” Layson said. “They’re all insanely talented and passionate about their music, and it really shows.”

Q&A: Screaming Females set to play show at The Haunt