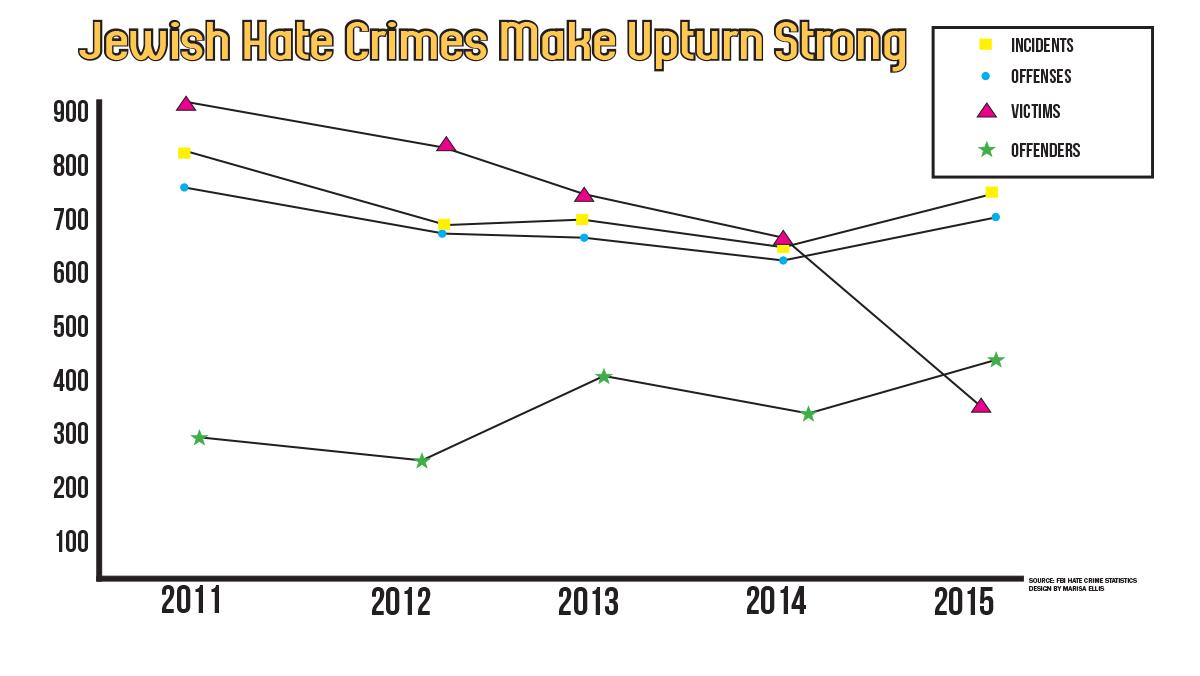 Marisa Ellis/The Ithacan
The most recent report came from 2015, in which there were 664 incidents, 695 offenses, 731 victims and 387 known offenders, all with an anti-Semitic motivation. Between 2011 and 2014, the number of incidents and offenses were steadily decreasing until the 2015 spike.
By Erin Conway — Staff Writer
Published: March 22, 2017

Jewish communities, synagogues and cemeteries across the nation have been receiving threats since the election of Donald Trump as president, and the Jewish population on Ithaca College’s campus is feeling the effects and planning solidarity events to cope.

Freshman Josie Berman said in her hometown of Minneapolis, Minnesota, her Jewish Community Center — a building where many children go to school from kindergarten through eighth grade, take Hebrew classes and work in the babysitting centers — received a bomb threat via a phone call.

“I have many friends who work in the preschool and babysitting centers of the building who had to evacuate the children from the building after the threat was placed,” Berman said.

Many other areas of the United States are receiving bomb threats as well. A Jewish Community Center in Rochester, New York, received one and had to evacuate March 12, coinciding with the Jewish holiday of Purim. Similar threats occurred on that day in Indianapolis and Milwaukee, both also without incident. But threats like these make Berman feel uncomfortable about going home.

“I [hadn’t] been home since the threat was initiated,” Berman said. “On campus, I feel safe, and I enjoy being here with a strong Jewish community. Going home right now, I don’t feel as safe.”

Berman led a solidarity event March 9 that included talks on anti-Semitism, discussions on the recent bomb threats that have been occurring across the nation and positive note-writing. She said about 20 people attended.

“We each wrote positive notes on notecards to pass around to friends so they could take something encouraging going back home to a place that might not feel so safe because of the threats,” Berman said.

Nalani Haueter, president of Hillel at the college, said the Jewish community wants to organize more solidarity movements to ensure that Jewish students and their allies feel safe despite the problems going on across the country. Hillel is one of two Jewish communities at the college, the other being Chabad.

“We are working on an event where people can come and be together, like a solidarity event,” Haueter said. “People can come perform spoken word, music or art just to all be together in a safe space.”

At the college, the goal of the solidarity events in the works is to bring people together from all communities, not just the Jewish ones. Haueter said Cornell’s Muslim and Jewish communities will also be invited.

Berman said she does not have faith that the government will stand up for marginalized groups in our country.

“I really don’t think the president is going to do anything,” Berman said. “It’s up to us as the American people to stand up for each other and come together as one. Even if he won’t do anything, we need to be doing things to support each other.”

Rebecca Lesses, associate professor and Jewish studies coordinator, said she discusses threats to the Jewish community with students in her classes when they arise. Lesses said overall, the students she has spoken to expressed concern regarding the threats and the lack of government response.

“We have been talking about it in class a bit,” she said. “It’s a matter of concern to many students if they are plugged into the Jewish communities. It hits people personally and indirectly, and the feeling of not knowing if our government is really on our side adds to the worries about the threats.”

A positive result that has come out of the threats, Lesses said, is the sense of solidarity among different marginalized groups that have been experiencing similar issues.

“One thing that has made me feel better is the solidarity between Muslims and Jews now,” Lesses said. “For example, Muslims in St. Louis organized fundraising efforts to help the Jewish cemetery that was vandalized and others affected. Jewish communities have also been contributing to one of the mosques that have been fire-bombed in Tampa.”

But sophomore Rachel Steinmetz, vice president of Hillel at the college, said she remains skeptical regarding the government’s concern with the threats toward the Jewish Community Centers but hopeful about actions the United States government could take to stand up to these injustices.

“I think you never know what is going to come out of our government now,” she said. “I would hope it would be positive towards the Jewish communities, but who knows.”