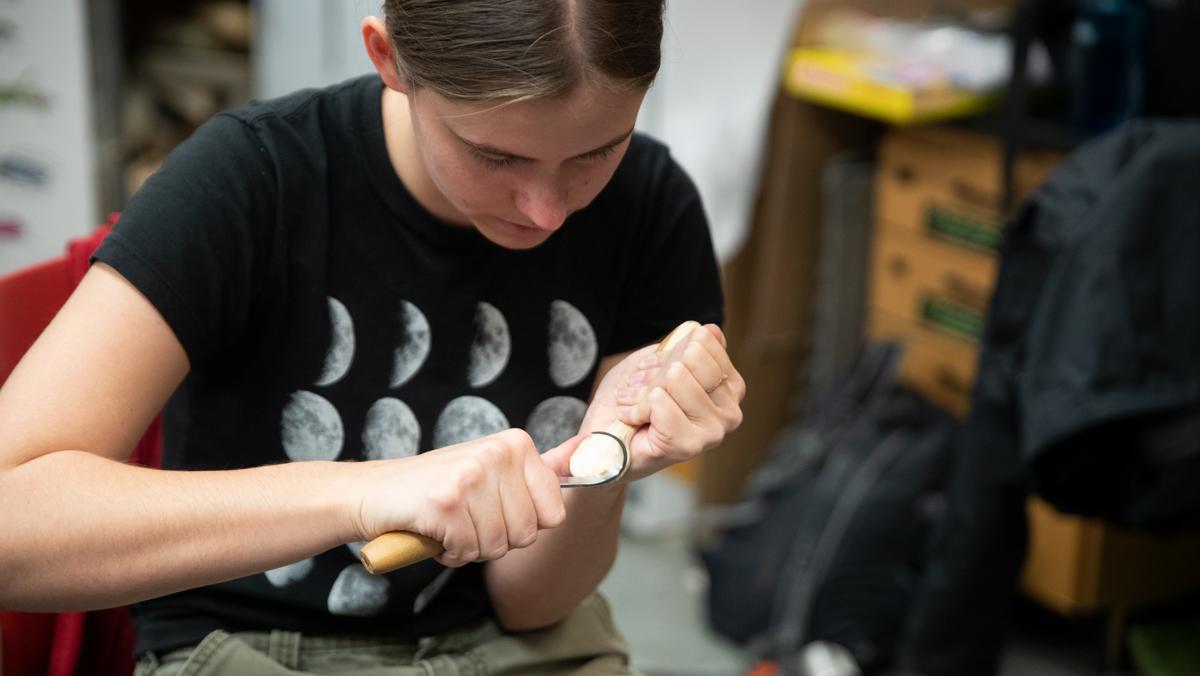 Tenzin Namgyel/The Ithacan
Senior Jennifer Skala is one of several students teaching the Non-Timber Forest Products course in the Spring 2019 semester. The course will be run as a noncredit extracurricular activity for participants.
By Mary Rand — Staff Writer
Published: January 27, 2019

Ithaca College’s Non-Timber Forest Products class, a course that teaches students how to make and sell products from nature, is normally taught by a professor. This semester, however, student leaders will be taking over to continue its instruction as an extracurricular activity.

Topics in Natural Resources and Ecology: Non-Timber Forest Products is a class oriented around fieldwork rather than classroom instruction, said Jason Hamilton, professor in the Department of Environmental Studies and Sciences, who usually teaches the class. Hamilton is on sabbatical in Spring 2019. During the course, students belonging to any major can spend time in the Ithaca College Natural Lands, working to make maple syrup, honey and other products sold through a business, South Hill Forest Products, which operates alongside the class.

It was not originally planned for the class to continue without a professor, Hamilton said. He decided to let the class proceed when senior Jennifer Skala, the student who will direct the class and lead the business this semester, volunteered to lead with other students.

“I love the class a lot,” Skala said. “I realized that I had the skills and knowledge that I needed that if I wanted to, and I had enough people, I could carry it on myself.”

The class will be led by committed students who will put in several extra hours over the week into managing the business, teaching and producing products, said senior Cheyenne Carter, who previously took the class. Carter compared the student-led initiative to an extracurricular activity. The class was not available for registration on HomerConnect for this semester, and students will participate outside of their other classes for no credit, Skala said.

When Hamilton taught it, the three-credit class was held for three hours one day a week and included several hours of work outside of class, she said. Carter will return to teach how to make salves, which are lip or muscle balms, and carve wooden knives and spoons.

Maple syrup is the flagship non-timber forest product harvested by the class, along with honey, salves and wood carvings, Hamilton said. The syrup comes from a concentration of sugar maple trees located in the Natural Lands. Students tap the trees for sap and then burn the sap to produce syrup over the course of the semester, Hamilton said. The honey comes from the college’s apiary, and students are taught to carve their own wood.

The products from the class are sold through the South Hill Forest Products business, the money for which goes to pay for the production equipment for class activities. In the spring, the class also hosts an open house, called Sugar Bush, to share work with the college community. Skala said this semester’s Sugar Bush is planned to take place around Earth Day, April 22.

Previously, Hamilton would make all the decisions week-to-week and set priorities on when to tap maple trees and when to burn the sap to create syrup, decisions that will be made by the students this semester. Production for this semester will likely be reduced as a result, Hamilton said, but regardless of reduced output, independence would offer valuable experiences for the class.

“If there’s a decision to be made, they’re going make the best decision they know how to make,” Hamilton said. “That different emotional experience is going to change the learning because they don’t have anyone to rely on except each other.”

Carter said connections she made with others in the class motivated her to teach this semester.

“Not only did I get closer to the land, I got to know a group of kids in my department and they became like family to me,” Carter said.

Because the class was not listed in this semester’s course catalog, Skala held an interest meeting that drew approximately 20 to 25 volunteers, half of which had not taken the class before.

Skala said she wanted to take on the extra work for two reasons: The first was to make the class available for students who would not have a chance to take it without Hamilton, and the second was to make sure some students in Spring 2020, when the class is offered again, would have prior experience. Students were previously able to register for the class twice for credit. She said she is confident as possible in her ability to lead this semester.

Despite his sabbatical, Hamilton said, he will not be out of reach. He is staying in Ithaca to develop a class on beekeeping and continue research into animal tracking. He said he will be able to help advise if needed, especially in cases of safety when burning sap. Jake Brenner, associate professor in the Department of Environmental Studies and Sciences and faculty manager of the Natural Lands, will also be available, Hamilton said.

“It’s not sink or swim,” Hamilton said. “We’re not going to let them sink.”

Hamilton will return to teach the course in Spring 2020.

College is abuzz with beehive tours and new club