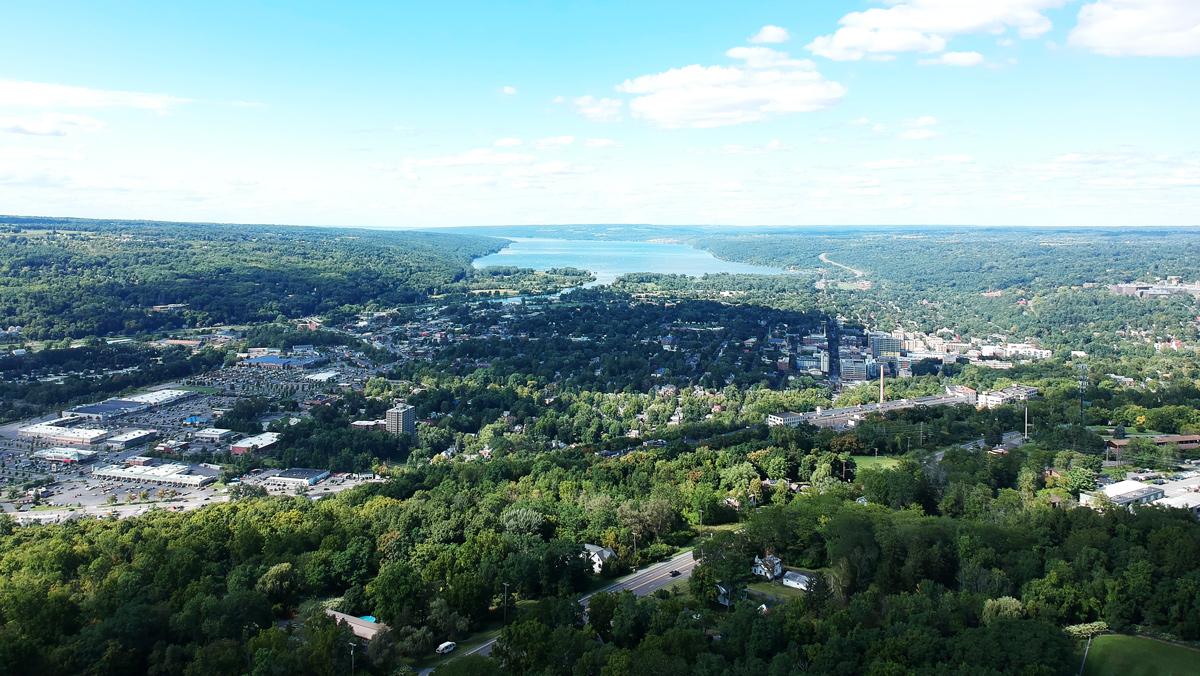 A group of Ithaca College students collaborated with the local radio station WRFI Community Radio to produce the fifth annual radio series that monitors the health of Cayuga Lake.

The radio series, “The Ripple Effect Radio Project,” was broadcast in three parts, segments that were approximately 10 to 20 minutes long, from Jan. 15 to Jan. 28. Senior Meaghan McElroy, junior Maggie McAden, junior Skylar Eagle and sophomore Lauren Leone worked with WRFI. Local organizations and institutions including The Ithaca Voice, the Community Science Institute and Cornell University helped to produce the project. The series focused on the effect of harmful algal blooms (HABs) and an invasive species, hydrilla, that is negatively impacting the health of the lake.

Hydrilla, an invasive plant species, is known for its 20– to 30–inch stems, which grow in large thickets. The invasive plant is detrimental because it outcompetes other indigenous plants that support the lake’s health.

The water quality and safety of Ithaca’s drinking water is at risk because of the presence of HABs, which create toxic patches in the water, according to the National Oceanic and Atmospheric Administration website.

The radio series is affiliated with the Park Scholar Program at the college, but it is not exclusive to recipients of the scholarship. Park Scholars can participate in the series to receive community service hour credits toward their scholarships. McElroy, McAden and Eagle are all Park Scholars.

Eagle said that Nicole Koschmann, director of the Park Scholar Program, asked Eagle to be the leader of the group service project. She said she managed deadlines and coordinated story pitches with WRFI. She said the project helped her to learn about a field she does not typically study in college.

“It’s also really cool to learn so much about something that I really wouldn’t learn otherwise in school because we’re all communication students, mostly,” Eagle said. “We don’t really study botany or marine science or any science really. … You’re not only helping your community, but you’re learning more about [the community] and improving your skills as a journalist.”

McAden — who studies communication management and design and environmental studies at the college — said she helped to produce a segment about HABs. She spoke to various experts, including Bob Howarth, professor in the Department of Ecology and Evolutionary Biology at Cornell University, and a representative from the Harmful Algal Bloom Harrier Monitoring Program, which is a group of local community members who volunteer to watch for outbreaks of HABs on the lake. The outbreak happened because of growing cyanobacteria that released toxic compounds that are harmful to humans and animals, McAden said.

In July 2019, the Town of Ithaca closed Cayuga Lake for swimming because of HABs. The students also interviewed a community member who aims to prevent shoreline erosion by planting buffer plants as part of a statewide initiative called Buffer in a Bag.

McAden said it was rewarding to have the semester-long research project finally air.

“I used to be a journalism major, so I know what [having your work published] feels like,” McAden said. “It was really good to be able to share the work that I did with the people that I interviewed because they were super invested.”

McElroy, who has double majors in journalism and environmental science at Ithaca College, said that working with WRFI provided an experience for her to work with radio, which was a new experience.

“The Park Scholars working with WRFI is exciting because we get to do reporting in ways that we might not be able to,” McElroy said. “I know that my schedule hasn’t allowed me to work at WICB even though I have a really strong interest in radio, so it’s exciting in that way that I got to try something that I wasn’t able to before.”

She also said that for the first time the project will be extending beyond a one–semester–long project. She said the group is currently looking into relevant issues like flooding, droughts and development along the coast of the lake.

“We’re trying to figure out who is tackling what issues and what issues there are left to tackle,” McElroy said. “Ithaca is an incredibly water-rich place to be.”

“The more content we create, the more we can share it with places as evidence of … that we’re capable of producing these types of investigative reports, that we are a community radio station,” Savitt said.