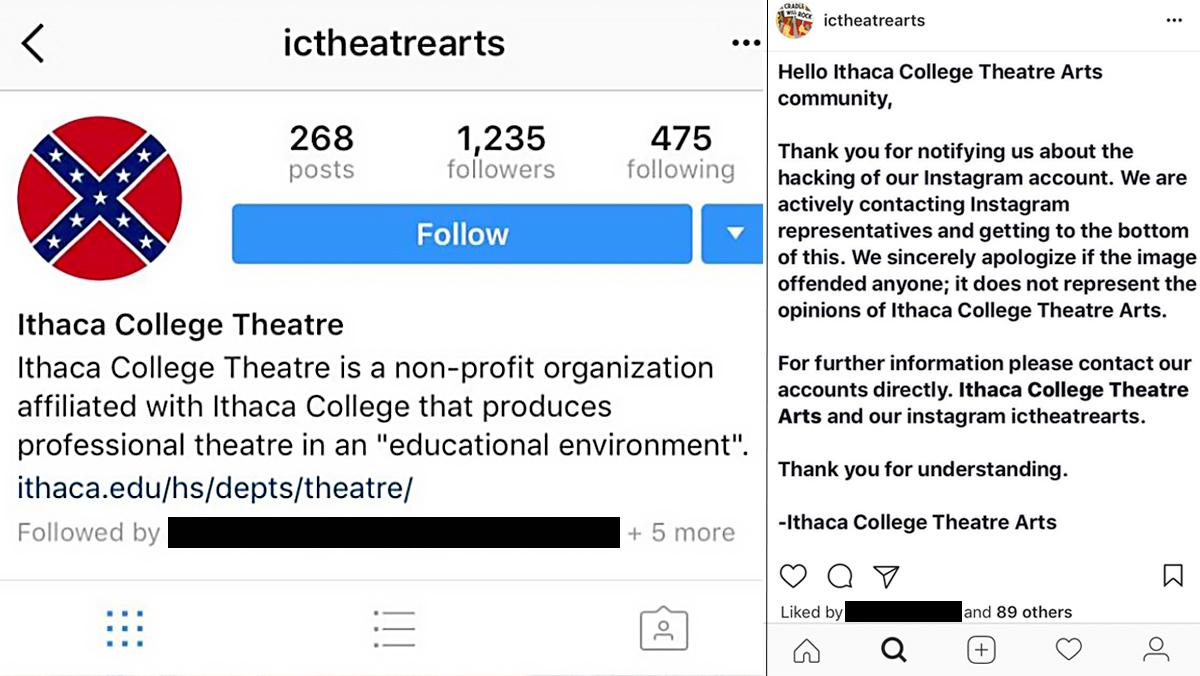 ictheatrearts Instagram
For about a half hour on March 26, the Ithaca College Department of Theatre Arts’ Instagram account was hacked to display the confederate flag as its icon. The image has since been taken down.
By Sierra Guardiola — Staff Writer
Published: March 29, 2017

Late at night March 26, the Ithaca College Department of Theatre Arts’ Instagram account was hacked — two years of its content was deleted and its profile picture was changed to a Confederate flag.

The hack occurred between 9 and 10 p.m., and the department regained control of the page within a half–hour, said junior Sydney Hill, student marketing associate for the Department of Theatre Arts. Though the page was restored quickly, Dillingham students still noticed and were upset by the hack.

Kellik Dawson, a freshman acting major, said that as soon as they saw the Instagram hack, they posted a screenshot of the profile icon in the Theatre Arts Facebook group for the students to see and emailed the head of the department and the office staff immediately.

Just the day before, Dawson and their friend posted in the Theatre Arts Facebook group about experiencing microaggressions and racism in the halls of Dillingham Center. They said their post was intended to make people aware of the problems they were facing but they are not sure if the hack was in retaliation to the post. They said they want the college to condemn this type of behavior and the theater department to address potential biases within the school.

“We talk about this being such a liberal school, but we forget that it is still a predominately white institution,” they said. “And even in liberal white communities, there is still ingrained racism.”

Hill said she felt the hack was unsettling because she perceived the Confederate flag as a racialized symbol — in a Facebook post, she called the hack a “hate crime.” She said the account is well–protected and that only a select number of students have access to the login. She said the students of Dillingham are very confused about why someone would choose to hack into the department’s Instagram account.

“I was concerned for the response of the students,” Hill said. “That image is not something that represents us.”

Catherine Weidner, professor and chair of the Department of Theatre Arts, said that as of right now, they are pursuing the hack to the fullest extent of the judicial process, working with the Office of Public Safety and Emergency Management, Digital Instruction and Information Services, and Instagram. She also said this issue and the reaction from the students shows there is more work to be done in regard to inclusion on campus and in the department. She said incidents like this reinforce the importance of this work.

“We will come out of this hopefully better, smarter, more aware and more inclusive,” Weidner said.

Freshman acting major Erin Lockett said she first found out about the hack through a screenshot she received of the altered account. She said she felt shocked and first thought that the hack was a joke. She said she wishes the hacker knew that the Confederate flag is not a symbol to joke about because of its roots symbolizing slavery in the South.

“I remember feeling red-hot angry,” Lockett said. “I wasn’t even sad at first.”

Freshman Maya Jones, also an acting major, said she is used to situations like these because she grew up in predominantly white environments. Jones said that as accepting as the theater department may seem to be, she still believes there are problems that exist.

“We are dealing with microaggressions and subtle racism every day, whether it be how we are cast or how we interact with our peers — small things that build up,” she said.

Lockett said she does not think someone went out to attack the students of color in Dillingham because no posts were published by the hacker and no messages were sent.

“It’s like they just wanted to spook people,” she said.

After the Instagram page was restored, a post was published on the Instagram account reassuring the students that everything was back to normal, Dawson said. However, he said this still upset some students because they wanted an explanation as what was going to happen next.

Weidner sent out an email to students in Dillingham addressing the issue and offering contact information if students had additional concerns or wanted to speak with her.

Jones said having a more diverse class is important because then if her friends were to see her struggling with something because of her race, they would understand, having had similar experiences. She also said students would benefit from having professors of color who can relate to the situations some of their students may be experiencing.

“I am really, really grateful to have friends in this department who are black, who are Latinx, who are there to support whatever I have to vocalize,” Jones said.