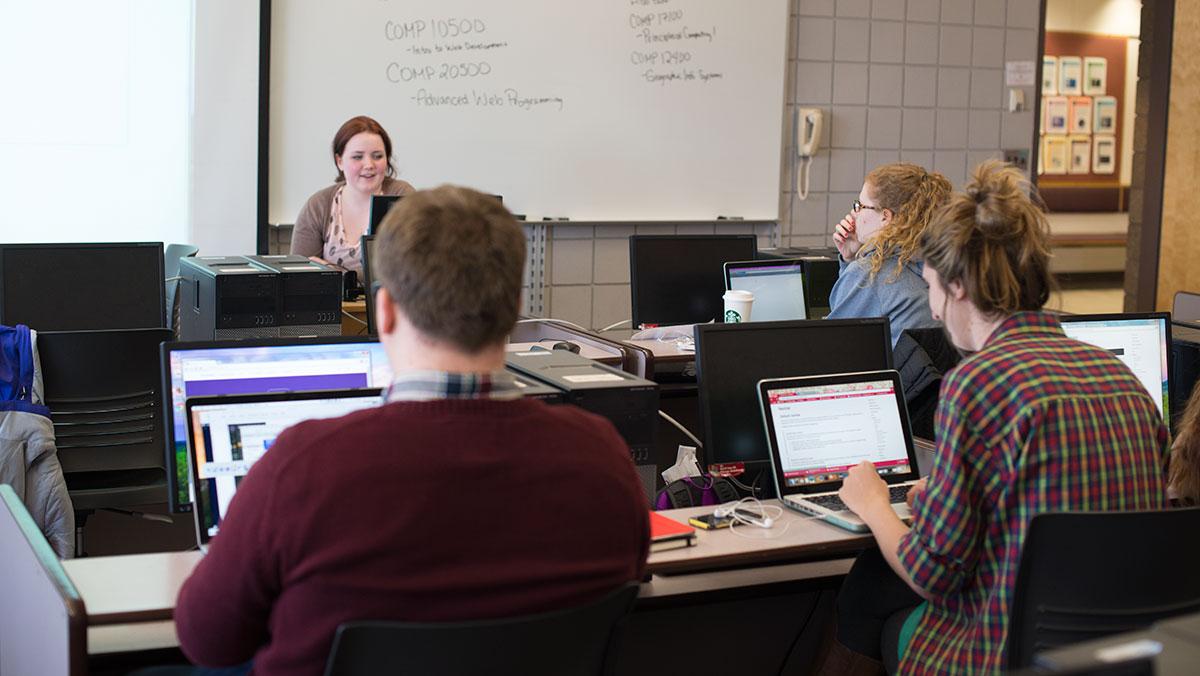 A new club at Ithaca College is aiming to change the lack of women representation in computer science by encouraging women to learn more about and engage in the field. Only in its first year, the Ithaca College Women in Computing Club hosted its first event, which was open to both male and female students, March 29.

Members of ICWC taught computer-programming basics to 14 students in total during the two sessions of its Web Workshop, which took place from 10 a.m. to 3 p.m in Williams Hall, Room 319. Students learned basic Web development and how to build a website in a limited amount of time.

Senior Colleen Kimball, the treasurer of ICWC, helped plan and devise the idea for the workshop.

“Part of our mission that we founded our club on was to spread our knowledge of computer science to the Ithaca College community,” Kimball said. “This event gave us the opportunity to teach a valuable skill that looks good on a resume, promote our club in its first year and introduce some of the women in the club who are enthusiastic about computer science.”

Kimball and sophomore Shianne Shanahan led the first session of the event, which was devoted to building a website from scratch. Shanahan and Kimball taught CSS and HTML, respectively, and helped students build working websites by the end of the two-hour session.

“We chose to teach Web because students can gain the most out of a short time learning Web development,” Kimball said. “Someone can learn to build a very nice, well-designed website in a relatively short amount of time, as in a few weeks. Other computer programming skills take much longer to refine.”

During the second session, junior Beth Dellea taught Bootstrap, a Web framework that programmers use to create more fluid, visually appealing websites. Students who had experience with HTML and CSS or computer programming in general were encouraged to attend the second session, as Bootstrap is a much more advanced topic. In between the coding workshops, students were provided with a free lunch as well as a talk with Nathan Prestopnik, a computer science professor at the college.

Junior Mariah Flaim, the event coordinator for ICWC, first started taking computer science classes during her sophomore year. She helped plan the workshop, which she said will hopefully attract more students to the department.

“I think that after this event, we will also really try to focus on bringing people into the computer science department, making them feel comfortable and teaching students about computer science,” Flaim said.

“The guys in the department are really supportive of us, and they have been listening to our events and helping us with the event,” Flaim said. “Our department in general is very fun-loving and we are all super close, so when we all joined this club it made us all even closer.”

The creation of the club follows the trend of an increase in STEM-oriented initiatives throughout the country, especially those that encourage gender equality in STEM. Initiatives from the White House and from companies, such as CoverGirl’s “#GirlsCan” commercial campaign, have contributed to promoting increased female participation in the STEM fields, particularly in computer science.

“I and everyone else in our club realize that it’s important for us to pursue STEM careers because it is so male-dominated,” Flaim said.

Kimball pointed to the concept of impostor syndrome, defined by the Caltech Counseling Center as a “collection of feelings of inadequacy that persist even in face of information that indicates the opposite is true,” as a cause for females’ lack of confidence and participation in STEM subjects, as well as a lack of strong female STEM role models in the media.

“Typically, on TV or in movies you see maybe one female in a group of male scientists — it’s hard to find a role model to mirror in popular culture,” Kimball said. “So we have all of these ideas in our head about who belongs in the major, and we instantly have all these uneasy feelings.”

Members of ICWC will be attending the New York Celebration of Women in Computing Conference in April, where Kimball and sophomore Shelby Cohen, the president of the club, will be presenting their own computer science–related research. ICWC members hope to gain more additions to the club and add new computer science majors or minors to the department, and plan on having more seminars in the future to garner more interest in computer science.

“The more women that go into STEM majors and end up in STEM jobs, the closer we get to completely crushing the stereotype that only men go into sciences and women go into the arts,” Flaim said. “That is why our club is so important to me, because I know that no matter what, I have a group of women with the same interests who will push me to continue what I do with confidence.”